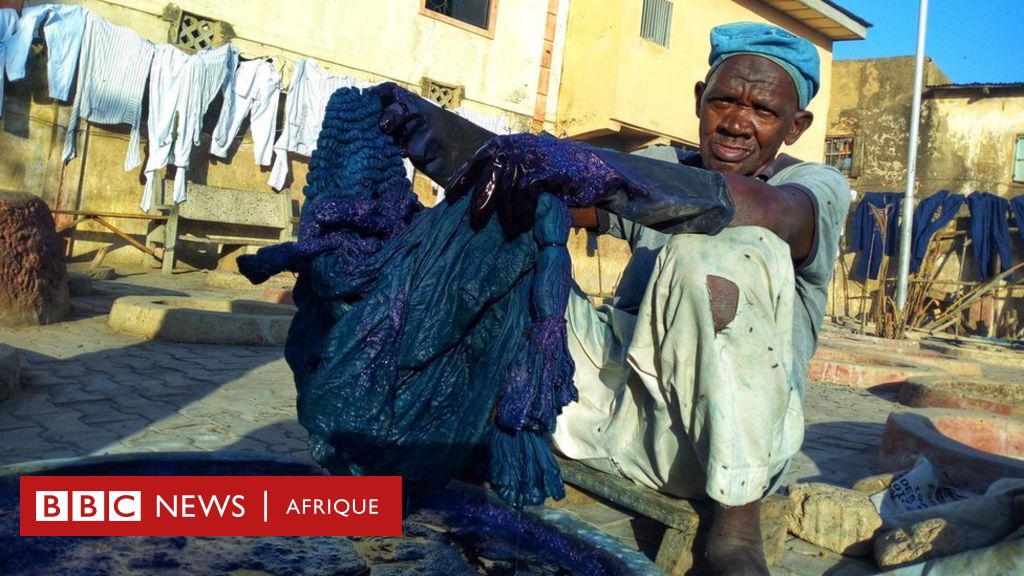 For more than six centuries, a large area of ​​the historic city of Kano in northern Nigeria has been home to color houses, where beautiful fabrics are made using ancient techniques.

The fabrics – dyed deep blue – have long been sold in Africa and the Middle East.

But many are concerned that this industry is threatened.

“The younger generation does not want to join the colors,” complains Baba Muhammad, who is squatting at a large pit filled with a dark indigo-colored liquid.

The 75-year-old throws a piece of fabric into the hole with his hands covered in rubber gloves.

The old colors fear that he is one of the last people to practice this ancient ritual, where the young have more modern tastes.

“They prefer to go into business, they like to design the fabrics but not to color them,” he explains.

The “blue men in the desert”

Kofar Mata’s paint factory – established at the beginning of the 16th century – was once a source of income for thousands of people in the area.

The unique designs of the fabrics are usually created by women, who twist and tie the fabric at home in different forms to produce designs. The knotted fabrics are then left to the colors.

The city of Kano is an important economic center of northern Nigeria and was a crucial stop to trade across the Sahara in pre-colonial times.

Historians say that the Tuaregs – “the blue men of the desert”, so named because of the striking color of their clothes – used to visit the ancient city.

They exchanged camels and dates for colorful fabrics.

The attraction of Kofar Mata’s fabrics was largely due to the local natural ingredients used to dye the clothes.

Even today, the colors say they avoid artificial ingredients and use materials like the local indigo plant that gives the fabric its color.

But in recent years, this ancient tradition has faced a myriad of threats.

One is the Boko Haram uprising, which has led to an depletion of customers, especially those traveling to northeastern Nigeria, where Islamist militants are active. This situation has also affected those who come further away.

“Before, tourists came here all the time from all over the world: France, Germany, Britain and America – but the problem of insecurity in northern Nigeria has affected trade,” explains Baballiya Hamisu, one of the colors.

At 37 years old, Hamisu is one of the youngest colors to work in the pits.

“I started coloring when I was 10, so I’ve been doing this for about twenty-five years,” he says.

Yet Hamisu says he is old enough to be nostalgic for this dying art form.

“When I was a child here, he remembers, there were a lot of dry cleaners, but today we only have 144, of which no more than 15 are in use.”

Kano is among the fastest growing cities in sub-Saharan Africa. In recent years, it has been the scene of very controversial demolition of a number of its historic sites, demolition that the government has deemed necessary, wanting to make it a modern city.

Tijjani Muhammad Naniya, a historian at Bayero University in Kano, says urbanization is not the only threat to the color scheme.

“The problem arose from a colonial policy to transform Kano’s economy, with the city importing clothing from Manchester and other cities abroad,” he explains.

The emergence of cheap imported fabrics is a major problem for local colors. They claim that although prices are relatively the same, competition is fierce with many customers being drawn to the new modern models.

Most of the men who work in the pits are descendants of color, like Haruna Baffa, Kofar Mata’s dye manager, who says he is of the seventh generation.

With a smiling face, he traces the rich history of his family: “I have inherited this business from my father, my father has inherited it from his father – it is from generation to generation. My seventh great-grandfather, Muhammadu Dabosa, is the founder of the dyeing center.”

The colors claim they do not receive public support from the government or local authorities.

Hamisu believes that efforts can be made to preserve this important industry.

“If the government can buy our products and encourage people to do the same, we will thrive,” he said.

“Imagine the president or a governor carrying one of our Kofar Mata drugs, no matter how valuable it seems, it will be precious,” Hamisu adds.