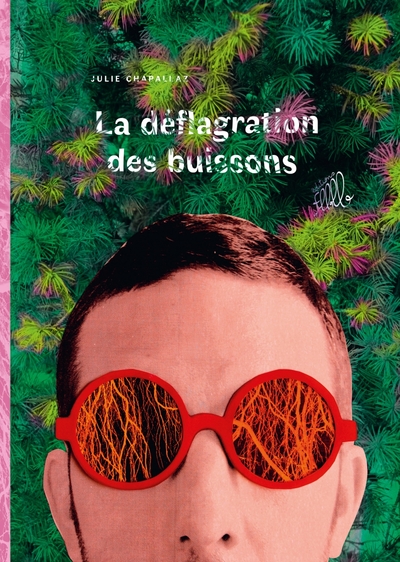 Julie Chapallaz invites us on a surreal journey deep into the dreams of an unknown sleeper. The main character, who remains anonymous throughout the book, struggles in this mysterious world, where the characters he meets all turn out to be more eccentric than each other. Then he embarks on a kind of existential and initial quest and sinks into territories whose eccentricities he discovers. Everyone seems to be transformed or fighting against a dream-like power that moves this subversive reality.

The narrative development is very well done, leaving enough mystery to give rise to the desire to move forward in the story and understand the various issues in these astonishing sequences, while installing a subtle and ubiquitous humor that contributes to a true reading pleasure : there is a joyful mood on these pages, carried in part by a protagonist who plays the various facial expressions wonderfully well.

Julie Chapallaz’s pictures fully participate in this unique impression that grips us throughout the book. Their realization turned out to be long and tedious, but this work makes it possible to implement an original and immersive aesthetic. Carved, colored, recomposed, they have a special aura because each part retains its connection to reality (photography), while together they present more plastic qualities: in short, from parts of reality the author composes paintings. It then cancels the dichotomy between two distinct semiotic regimes to engage in a more complex and stimulating aesthetic experience. This tension between these variations of image regimes actually forms a reservoir for the imagination, which allows all the most baroque deformations or interventions to occur with delicacy.

The author thus installs a figurative poetics that may seem disturbing, but which on the contrary proves to be most stimulating. We feel good in these images, and the various semiotic clashes enrich dynamic compositions. The chromatic atmosphere, reduced to a few nuances, completes this plastic work with great sensitivity.

To respond to narrative needs as well as graphic demands, the colors collide as much as they come together: the nuances collide as much as they cut out the image and compose it. In doing so, they adorn the story with a disturbing strangeness. Even more, the opacity of the scenario responds to the darkness of the images. This reduced brightness unfolds a visual atmosphere that is perfectly suited for nocturnal walks in the misty subsoil of dreams, and encourages one to physically approach the book, to bring it closer and thus make the reading experience even more immersive.

With The deflagration of the bushesJulie Chapallaz produces a very beautiful book, original, funny and touching, and offers a dense and refreshing reading experience that we rarely experience.

We can not end this presentation without pointing it out The deflagration of the bushes opened the year of the photo novel for the publisher Flbb. In fact, the photo novel has always been discredited, inevitably viewed from its romantic angle (even openly silly), conveyed, among other things, by the dazzling success of the newspaper Both of us.

But it would be to forget that Harvey Kurtzman practiced the photo novel a lot in his diary. Help!, photographing some future figures from the underground; that of course Hara-kiri stood at the forefront of this means of expression in France, but by exploring its poetic potential (how beautiful were Gébé’s first cartoon photo novels) and subversive, the cheerful band amused itself wildly during filming memorable prospects; that the new novel has also taken hold of the photo novel by Alain Robbe-Grillet with the photograms by Resnais forLast year in Marienbad or even albums by Benoît Peeters and Marie-Françoise Plissart, of incredible formal beauty and great literary subtlety; that academic works, mostly from the pen or Jan Baeten’s coordination, have made it possible to present this artistic practice with a history and an aesthetic, a company that was even crowned with success during the exhibition in Mucem in 2018 accompanied by an equally admirable catalog; and, of course, that for several years Flblb has published remarkable photo-novels that really work on the possibilities of this practice by offering works of constantly renewed formal originality, of particularly effective humor, and of a literary singularity that disturbs so much that we close each of their publications saying that the very form of the photo novel is perfectly invested.

After the two years of comics (2020 and 2021), the publisher further intensifies the promotion of the photo novel by offering several particularly promising titles (e.g. Gaston in Normandy by Benoît Vidal, which will be published in a few weeks and then others throughout the year) and by highlighting heirlooms or creations already published. This company could not be more commendable as it shows the love of the photo novel and as it is today in France (and more widely still) constitutes one of the only creative spaces around this hybrid medium that never ends, not to amaze us. Long live the photo novel!