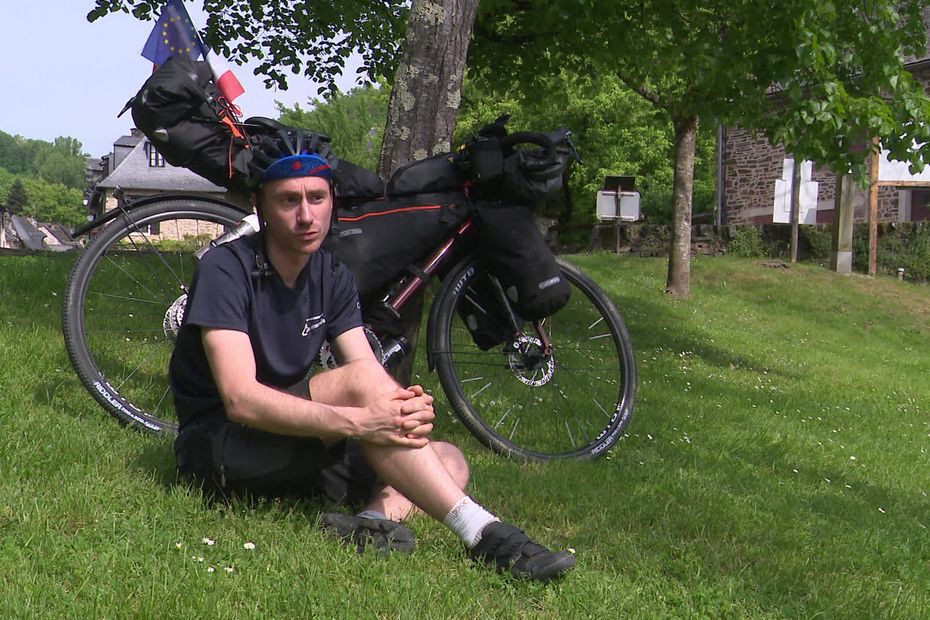 A former history teacher from Corrèze has decided to carry out a bicycle expedition between the Gurs internment camp (Pyrénées Atlantiques) and the Auschwitz concentration camp (Poland). 3,000 kilometers for the memory obligation.

His bike placed in front of the memorial, Fabien Devilliers takes the picture with his phone. With his adventure equipment you could take him to a tourist cyclist. That is not quite the case. This young Corrézien has embarked on a journey: the Memorial adventure . A shipment of 3000 kilometers, by bike, through Europe for the memorial service, around World War II.

He started on April 24, 2022 from Gurs internment camp in Pyrénées Atlantiques, where he has lived for 2 years. A date that owes nothing to coincidences as it is the one of National Day of Victims of Expulsion. Its goal: to reach the concentration and extermination camp Auschwitz-Birkenau (Poland) by taking a route that will pass through several important stages such as the martyr village of Oradour-sur-Glane (Haute-Vienne), the Plateau des Glières, a center of resistance ( Haute-Savoie) and the European Parliament in Brussels.

This trip which was to last 3 months. Fabien Devilliers has sprinkled his sports career with very precise crossing points: places, lesser known, but where steals and monuments are reminiscent of an event from World War IIas on this side of the road, in Allassac: “At this place, on June 1, 1944, the 2nd Battalion of franc-tireurs, a partisan, after investing the city and disarming the gendarmerie, handed over 200 young people who had been gathered for forced labor and transported by rail to Nazi Germany.”

At each stop, the young cyclist repeats the same gesture: to take a picture to feed his website and social networks:

When I go to places where historical and important events have taken place, I like to share them and explain what happened to people who follow me on the networks.

As a 27-year-old, Fabien Devilliers has already had several lives. He grew up in Corrèze, between Brive and Allassac. He had very early sense of commitment : from 7/8 years he joined the municipal youth council in Allassac. At the age of 18, he became a member of the municipal council in the municipalityone of the two youngest in Limousin.

My father’s great-grandmother, Fernande Geneste, with whom I spent much of my childhood, was mayor of Allassac. My great-grandfather was also a town bailiff. I think it forged my civic spirit. For me, politics has always been the field of ideas.

This sense of commitment will never leave him. In college (where he does law studies in Brive that is International careers in Clermont-Ferrand), he organized another trip International Court of Justice in The Hague for his classmates. After the dissertation, he worked as history and geography teacher in high school and vocational high school in Brive. But he is not in the big machine of National Education and prefers to leave after a few months. In 2019, he will be project manager in the Creuse branch council, where he works on integration projects: “When I was the youngest in the band, I got the digital file”. It’s good that Fabien Devilliers has, in addition to his passion for history, the digital gift. It must be said that he fell into it when he was little: “My father was a computer scientist. When I was a kid, I went with him to the garage to tweak computers.. That’s how it will be digital communicator. 2 years ago he moved to Pau and worked as digital coordinator for local authorities in the Pyrénées Atlantiques.

But at the age of 27, after this dazzling journey, the young man felt discouraged professionally and looking for a new breath. Faced with the damage of completely digital, dark thoughts, an uncertain future, he decided in January last year to leave his contract position and embark on a project he had in mind for years: “The Memorial Adventure”. After a few months of preparation (website, physical preparation, equipment …), the drawing course with three main goals :

“I’m a little embarrassed by the term ‘memory obligation’ because it implies a notion of obligation”, explains Fabien Devillier. But he also knows that knowledge of history is fundamental.

Hence his choice to support UNICEF. Faced with global warming, war and other current uncertainties, Fabien Devillier rejects pessimistic discourse and wants to move forward, especially by sharing his passion for history with young people.

We young people have a duty. That of changing everything so that everything gets better.

With its 27, this “Memorial Adventure” is also one personal quest : “I hope to start on a good foundation. Go back and choose what I want with my life”, concludes Fabien Devilliers. Why not write a book about his journey later? Nothing required. The young Corrézien has no specific goal. Just complete his memorial journey.