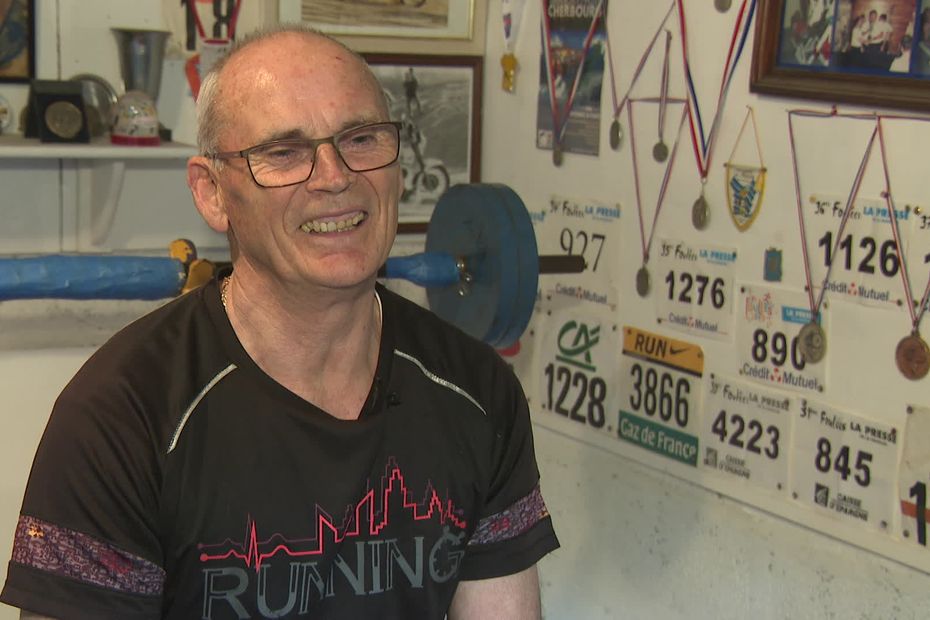 Imagine running a week in the sand, under a scorching sun … Norman pensioner Jean-Pierre Mesnage started for the 11th time on a sand marathon. Meeting an old desert lover.

Sea views With the sun spraying over the coast that day, the turquoise color of the English Channel has something to dream about and even travel. We almost imagine ourselves in the Caribbean from this green garden that welcomes us. An invitation almost to idle if there was not this well-motivated wind.

Sneakers on the feet, Jean-Pierre has put on his blue to look after his cacti, which can be found everywhere in his home, with different species in his garden or porch. “I love cacti. They are like me, there is no need to take care of them. No need for water, from time to time a little bit. The less you take care of them, the better they are. It looks look like character as I am! “

He calls himself silent, our Norman. But by digging a little, by taking the discussion on a very specific basis, his eyes begin to shine very quickly.

My mom said to me, “You take something, you move it, even though you’re 90 years old, but you move. You do something.

He has always practiced his sport. “When I do not, I miss it!” Can we really be surprised to hear that it is his holiday to go for a walk in the Moroccan desert?

We met him when he returned from his 11th marathon of the sands.

Jean-Pierre Mesnage started with more “classic” marathons: Paris, New York, Cherbourg … But very quickly he left the asphalt of cities to live a completely different type of challenge, of adventure.

In 1988, this motocross enthusiast discovered the Sahara by tackling Paris-Dakar, a mythical race that he unfortunately did not complete.

I did Paris-Dakar. And a few grains of sand in my carburetor prevented me from moving on. But I discovered the Sahara and I said to myself I should go back there and there are not two grains of sand that will stop me.

4 years later he is here at the start of the Marathon des Sables. He will definitely fall in love with the place, “the solitude and beauty of the landscapes”. In early April, he returned from his 11th. “When I find myself alone, I feel good. I have my thoughts, I move at my own pace. If I’m not too bad, I look at the landscapes, otherwise I look at my feet.”

It must be said that the decor is as incredible as the program is difficult: 6 days to 6 stages and 250 km in the desert, in food self-sufficiency. Each runner carries his bag with his freeze-dried food inside for the week. “It’s finding oneself in front of only one bowl, no more internet, basic life! The sets are amazing, I have the impression of finding myself in the ravines of the United States, at one point it’s beautiful … After my wife, I is simply in love with the desert “he acknowledges with a big smile.

The creator of this extraordinary competition wanted to take the participants out of their daily lives. “We are projected on another planet where we find this voluntary shipwrecked side. We sweep away everything that is not essential.”

We just have to walk, sleep, eat ourselves and repeat this gesture daily with our adventure mates, which we find in the evenings at the bivouac, under the stars. It’s a timeless adventure.

Founder of the Marathon des Sables

Tackling such a challenge is not given to everyone, and yet Jean-Pierre was not even the dean of the 2022 edition. No, an 80-year-old man exceeded him. The organizer registers one “wisdom of people who are a little older, they are not crazy dogs.”, e.g.t fortunately facing these long and sometimes steep paths, sometimes rocky, sometimes sandy, under a sun that may appear without pity as under the previous edition. “The heat … It went up to 52. There were many abandonments”notices our Manchois.

Until last year, Jean-Pierre had always been at the end of his Sahara adventures. But just like in October last year, a lumbago ended up overcoming its strength, on the 4th stage. The day before, it was borne out by two other competitors, the English, that he had succeeded in crossing the line. “One never knows what the body will give. Of the 11 (Editor’s note: sand marathon) that I have completed, this is the most difficult. This sandstorm … When you are on the ridges, there are very beautiful landscapes, but you have to take care of your feet. “

Disappointed at not being finished, frustrated at seeing his companions arrive at camp in the evening and then receive their “finisher” medal, Jean-Pierre has not given up coming back. On the contrary. “Only the doctors will say to me ‘stop, you’re too old; but that day I think it was good … (he hesitates). I hope I could stay as long as possible, yes, as long as possible. I’m 73 years old, the shape is still there, otherwise I’ll end up in a nursing home! “

Lumbago? I promise he’s going to the doctor this time. In the meantime, he has already run out into the Cherbourg heath, in the middle of nature, with this view of the sea, which he loves so much.

And madame’s holiday? It will be in Brittany, as every year, with their son. From there to say that Jean-Pierre will take the opportunity to tread the local sand a bit, there is only one step …