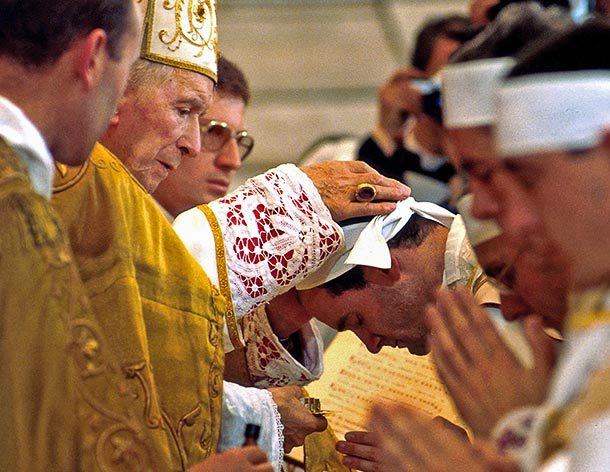 1. The website “Claves.org” is the official organ of the Society of Saint Peter, similar to what “La Porte Latine” is for the district of France of the Society of Saint Pius X. In the section “Theology”, Father Louis-Marie de Bligniières , from the fraternity Saint-Vincent-Ferrier, has recently published a series of “Free interviews in the summer of 1988”. The third interview, published on April 28, 2022, is entitled “Why we did not follow the coronations”.

2. The whole explanation of the Dominican father rests on a single premise: to follow the consecration, that is, to approve of the act performed by Archbishop Lefebvre on June 30, 1988, would be tantamount to not maintaining hierarchical communion with the saint – Siege of Rome. From there, everything hangs.

If the ordination of bishops in the summer of 1988 represents an act of schismatic character, it is clear that the priests and believers in the movement known as “Ecclesia Dei” are right.

The other aspects of the approach which led them to seek to obtain from Rome a regime in favor of tradition, their personal intentions, their worries, and their pains, are evidently secondary and incidental to this principal premise.

And, of course, it is not on these secondary aspects, but rather on this main premise, that the critical assessment of the Society of Saint Pius X bears and the exact reason for its profound deviation from the said movement. Everything else would just be a misunderstanding.

3. Father de Bligniières does not dwell on demonstrating his premise. “What we wanted,” he writes, “was clear and difficult: to hold the traditional Mass within the visible perimeter of the Church, to use an expression of Jean Madiran, that is, in hierarchical community.”

Everything happened then – at least in the Father’s mind – as if the consecration of the bishop on June 30, 1988, had by itself undermined this fellowship and excluded Archbishop Lefebvre and his believers from the visible circle of the Church.

However, in number 1 by Motu proprio Ecclesia Dei ramtwhereby Pope John Paul II very officially assesses the extent of these consecrations, these are presented by the Holy See as a cause of sorrow to the Church, because they consecrate the error in all efforts. until now of the Pope “to ensure full communion with the Church of the Priestly Society of Saint Pius X”.

It is therefore clear that in the eyes of John Paul II it was not the dedication of 30. June 1988, which undermined the community’s community with the church. The problem of “full fellowship” had arisen before – “until now” – and it was not the consecrations performed by Archbishop Lefebvre that gave rise to this already long-standing difficulty.

The following figures, 3 and 4, further distinguish between the extent of the act of consecration, taken in itself (in No. 3) and the much deeper reasons which underlie the controversy against the Brotherhood of the Holy See (at No. 4). . Because, says this number 4, “by red from this schismatic act we find an incomplete and contradictory notion of tradition ”.

This summer, in the year of grace 1988, it is therefore two opposing notions of tradition – and therefore of the common good of the church – that face each other.

4. Everything then does not depend on the initiations, but on Vatican II, that is, on ecumenism, collegiality and religious freedom. Archbishop Lefebvre adequately explained this on many occasions and especially in the sermon of June 30, 1988, in which he already responded to the reproach that would be leveled at him two days later.

“I seem to hear, my very dear brethren, I seem to hear the voice of all these popes since Gregory XVI, Pius IX, Leo XIII, Saint Pius X, Benedict XV, Pius XI, Pius XII, who said to us: Since the Council , what we have condemned, here the Roman authorities adopt and confess it.How is it possible?

“We condemned liberalism; we condemned communism, socialism, modernism, sillonnism, all these errors which we condemned, now they are proclaimed, supported by the authorities of the church. Is it possible ! “.

The “contradictory notion of tradition” can therefore be attributed to present-day Rome, to this so-called “conciliatory” Rome, precisely by the fact that it claims to belong to the Second Vatican Council, whose teachings are contrary to the tradition of the Church. .

And if this “contradictory” notion of tradition is the deep root of the schism, it is for the moment in Rome, in this present Rome, which breaks with always Rome. The schism could not be in the Ecône, which stands out from this present Rome in order to remain faithful to Rome forever.

John Paul II can easily say that “no one can remain true to tradition by breaking the ecclesiastical bond to the one whom Christ in the figure of the Apostle Peter entrusted the ministry of unity in his church”: this reproach is launched in the face of Archbishop Lefebvre by precisely the one who is the first to break the famous ecclesiastical bond, by freeing himself from the teachings of his predecessors.

How can John Paul II claim to remain in communion with Popes Leo XIII, Saint Pius X, Pius XI and Pius XII by performing twice (1986 and 2002) the scandalous ceremony in Assisi? The very principle of this ecumenical and interreligious approach is explicitly condemned by the encyclical Mortalium animos of January 6, 1928, barely sixty years before the coronation of the Ecône.

5. It is then easy to remove the second aspect of the reproach which Archbishop Lefebvre has apparently incurred. His notion of tradition would be “incomplete” because it would not take sufficient account of the “living character of tradition.” In reality, this living tradition does not exist. It is a contradiction in terms, and it is one of the inventions of the Second Vatican Council that breaks with the former Magisterium of the whole Church.

Motu proprio believes it can justify this distorted idea of ​​a living tradition by relying on the famous No. 8 in the Constitution Dei Verbumwhich establishes the confusion between tradition, which is the transmission of the truths revealed by God, obtained by the doctrine, and the perception of these same truths by the believers, who receive them from the preaching of the teaching space.

Another is the transmission, another is the perception of what is transmitted. Perception takes place, and better and better; it progresses, effectively and above all, thanks to the preaching of the pope and the bishops.

But communication does not progress in the sense that the church does not yet finally possess the fullness of truth. With this evolutionary view of the living tradition, the Council opened the door to the “hermeneutics of reform”, as Benedict XVI made himself a theorist in his December 22, 2005 speech. [1].

Such is the deep reason why the Holy See condemned Archbishop Lefebvre and his work, and for which Father de Bligniières and his disciples refused to follow the initiations: the definition of tradition and teaching.

No. 5 of the founding motu proprio of the Papal Commission of the same name states that “the breadth and depth of the teachings of the Second Vatican Council require a renewed investigative effort which will make it possible to emphasize the continuity of the Council with Tradition, especially on doctrines, which perhaps because of their novelty have not yet been well understood in certain parts of the Church. “

It is therefore the idea of ​​a living tradition, applied to Vatican II, in all its consequences, which prevents “following the consecrations,” and which requires the support of the believers and of the priests, for whose benefit the pope wishes to establish this new Commission.

7. This conciliatory and modernist idea of ​​living tradition is the root cause of the division that still rages among the Catholics of tradition. And finally, the real reason why Father de Bligniières and his friends did not want to follow the inauguration is that they did not see all the harm in this new concept and preferred to “keep the traditional mass” within the visible circle of a very misunderstood obedience.

Father Jean-Michel Gleize is Professor of Apologetics, Ecclesiology and Dogma at Saint-Pie X Seminary in Ecône. He is the main contributor to Courier from Rome. He participated in the doctrinal discussions between Rome and the SSPX between 2009 and 2011.

[1] See the article “Magisterium or living tradition” in the February 2012 issue of Courier from Rome.