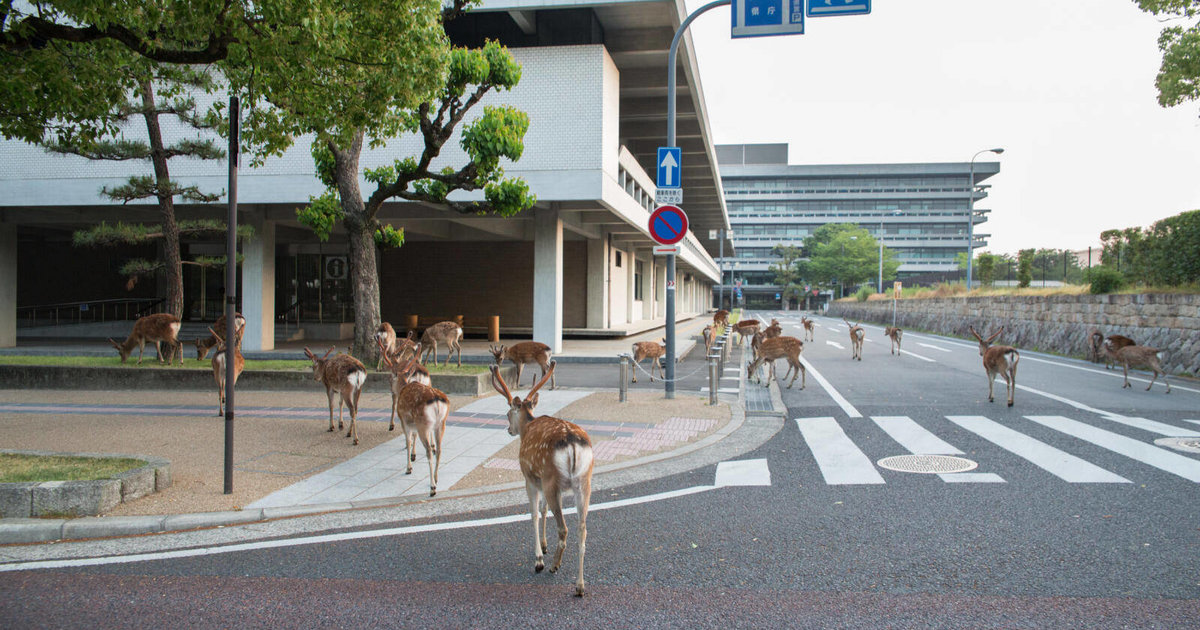 Animals are urbanized. We are not talking here about dogs or cats, but about wild species. Of course, they are not about insects, birds or rodents either – they have been city dwellers for a long time. It is rather a matter of wild boars, deer, weasels, snakes and even cougars, elephants, bears, monkeys, yes wolves. Real wildlife. Animals that nurture as much wonder as fear that haunt imagination as mythical stories. Their presence, as sudden as it is surprising, forces people to revise their security, to descend from Olympus. The city that was formed by separating itself from nature, from the wild, from the animal, must learn to live with it again. But how?

Could the city really become a Noah’s Ark, as you claim in your book “Zoocities”? How do you see the future of the beast in the city?

The experience of confinement has allowed us to perceive wild animals in places where we did not expect to find them. It was like revealing the nature of the city that we usually think has no citizenship. Hence a sense of pleasant surprise, which the media strongly relayed. Wondering about ducks strolling on the Comédie-Française forecourt in Paris as they usually paddle a stone’s throw away in the Seine, next to Île Saint-Louis, testifies to a kind of breathing in front of a restrictive and very high standardized urban world.

As for the question of knowing whether there will be more and more wild animals in the cities, it is clear that the massive destruction of the natural environments around the city centers, which is constantly expanding, is forcing the animals to seek refuge there. For example, kangaroos in Australia, which struggle to find grass in the bush, come into town to eat. But there is also the fact that humans, also driven out of their natural environment, in the urban areas where they accumulate, form unhealthy habitats from which many animals do their business. It should be remembered that about 2.5 billion people currently live in slums. When water stagnates, waste piles up, open landfills pile up, rats, mosquitoes, certain monkeys or gulls integrate humans into their new ecosystem and multiply.

With the ecological transformation, is it conceivable that wild animals return even more to urban areas?

Yes and no. On the one hand, one can imagine a major turnaround with denatured natural areas and certain “green” urban areas, organic, where water and food, and therefore wild animals, abound. The pollution of an urban waterway is conducive to the return of many species. On the other hand, the more the cities are “ecological”, that is, independent in terms of energy, materials, food, etc., the less they will impose the use, even the colonization, of the landscape. , the more natural environments they are. preserved, the more animals will be able to stay or return there.

At present, cities produce almost nothing of what they consume and dispose of all their waste outside. The development of cities towards forms of self-sufficiency is crucial for the ecological turn that it is urgent to take today. It is with the city, not with the rural areas, that it is advisable to start: to establish mixed and flexible forms of complementarity, card supply and recycling circuits, promote recycling of materials, plant fruit trees and create common gardens where possible, etc. This would then transform the city into a city.

What makes them different?

I suggested this vocabulary to distinguish between the historically “fortified” city – as a Tower of Babel that cuts itself off from the sensory world and leaves the earth to elevate humanity to the sky of the purest spirituality – and the city understood as an independent and multi – artssamfund.

As Aristotle has already explained, the city is the place of plurality, freedom of action and independence.

The city protects against enemies and animals, therefore against nature and against so-called “savages”, whose behavior would always be unpredictable and potentially frightening. If we are now willing to connect “wild” with the part of the unexpected, of the unprogrammed, of the irreducible to the environment that exists in every living being, including ourselves, we imagine that urban planning intended the rise of Civilization with large C is followed by sclerosing, standardizing and draconian effects.

On the contrary, as Aristotle has already explained, the city is the place of plurality, freedom of action and independence. It is neither centered nor geometric nor drawn from the uses of local residents, but on the contrary several and is likely to be requalified by these uses. The city is ideally suspended in time, while the city is dynamic, changing and imbued with history. One can imagine the multi-centered, consisting of housing units that are both connected and individualized, as a set of urban villages that the artist and urban planner Yona Friedman advocates.

To think in terms, not in city, but in city, is also to make room for aliens as well as for other living beings. As biologist and sociologist Sir Patrick Geddes thought, the city is evolutionary and adaptive. As the need arises, it changes. It therefore constitutes a complete ecosystem.

So when we say bring nature back to the city, it can also refer to the world of animals.

The question specific to the city is precisely to know how to create life forms that humans, plants and animals can not live with or on the contrary wage war against each other, but simply coexist.

This question is central and very specific. Where I live, as elsewhere, there are cockroaches, rats, gulls and also more and more wild boars and foxes. Eradicating them when they bother me is neither ethically possible nor effective in the field. As can be seen from the history of rats and mosquitoes, campaigns to eradicate so-called pests result in their increasing numbers. So how do we do it from case to case, locally, experimentally, so that the existence of some is compatible with others? The issues related to the ecological transition force us to review the hierarchies, the relationship of dependence, the articulation between public and private, between the individual and the community, between people and nature.

But how does one achieve this intimacy of closeness between humans and animals? What measures need to be taken?

First of all, there are two attitudes to be avoided: as I said, the extinction of the animals that bother us, and conversely the feeding of those we want to attract. This squares the circle in many cases because there are many conflicts. You need to know that the pest control industry and the food industry for wildlife are flourishing equally. But in either case, to kill or to feed, there is a desire for dominance that is anti-ecological and anti-democratic at the same time.

Specifically, there are all kinds of architectural, urban planning and also mental gestures to escape this double pitfall. The city can be arranged in such a way as to ensure the coexistence of the neighbors in peace with each other. For certain animals, one could choose to build coatings that provide grip for all kinds of insects, batrachians or reptiles, opaque panes to prevent billions of birds from crashing into them, reduce lighting, clean a waterway and put it back in the open, de-asphalt where possible, set up ecological corridors so the animals can cross roads, rails, gardens, etc., leaving useful materials, such as heaps of branches or stones, at their disposal in the yards or gardens, water and mud, etc. And each time, study the situation with specialists so as not to unbalance the situation even more.

The more honey bees there are, the less nectar is available for wild bees.

The case of urban hive mode is emblematic of an attitude that is at once interested, dominant, and erroneous. The more honey bees there are (ie tame), the less nectar is available for wild bees – of which the number of species is significant – which is crucial for pollination. The situation we have created is actually quite tragic for the latter to disappear.

How to avoid this pitfall?

I suggest starting from the neighborhood to better understand the right movements, to avoid the trap of emotions like outrage: a neighbor is neither friend nor foe. I do not choose my neighbors. They are simply in geographical proximity and share certain spaces with me, whether I want to or not. The question that the neighborhood raises is the right distance: neither too close nor too far. I suggest starting from there to create new values ​​and establish a life side by side and face to face, which to me seems to be the best basis for living together. It forms a base on which certain practices of sharing, mutual accompaniment, solidarity can develop.

How can all these units in a city’s life be put in place democratically?

In a city, citizen participation is not only necessary but also crucial to adopting an ecological lifestyle and putting pressure on elected officials in this direction. Acting locally on the one hand and committing oneself personally on the other are two sides of the same coin. Citizenship, which consists not only in monitoring the actions of those in power, but in taking care of the places we share with others, would emerge stronger from it.

Responsibility is the key.

Yes, responsibility for the state of the world and for its immediate surroundings by avoiding making people feel guilty. There is a punitive aspect in ecology that drives people away. While we would benefit from appreciating the strength of the collective commitment associated with the pleasure of sociability; commitment to the need to maintain forms of institutional normalization that lack flexibility and flexibility. Everywhere we see experiments flourishing (eco-districts, cooperatives, common habitats for the 3and age, urban urban gardens, collective maintenance of a forest, clearing and cleaning of a beach, etc.), where the active participation of employees and the preservation of the environment they identify, create and want to transfer are closely linked. Ecology and democracy do not go without each other.