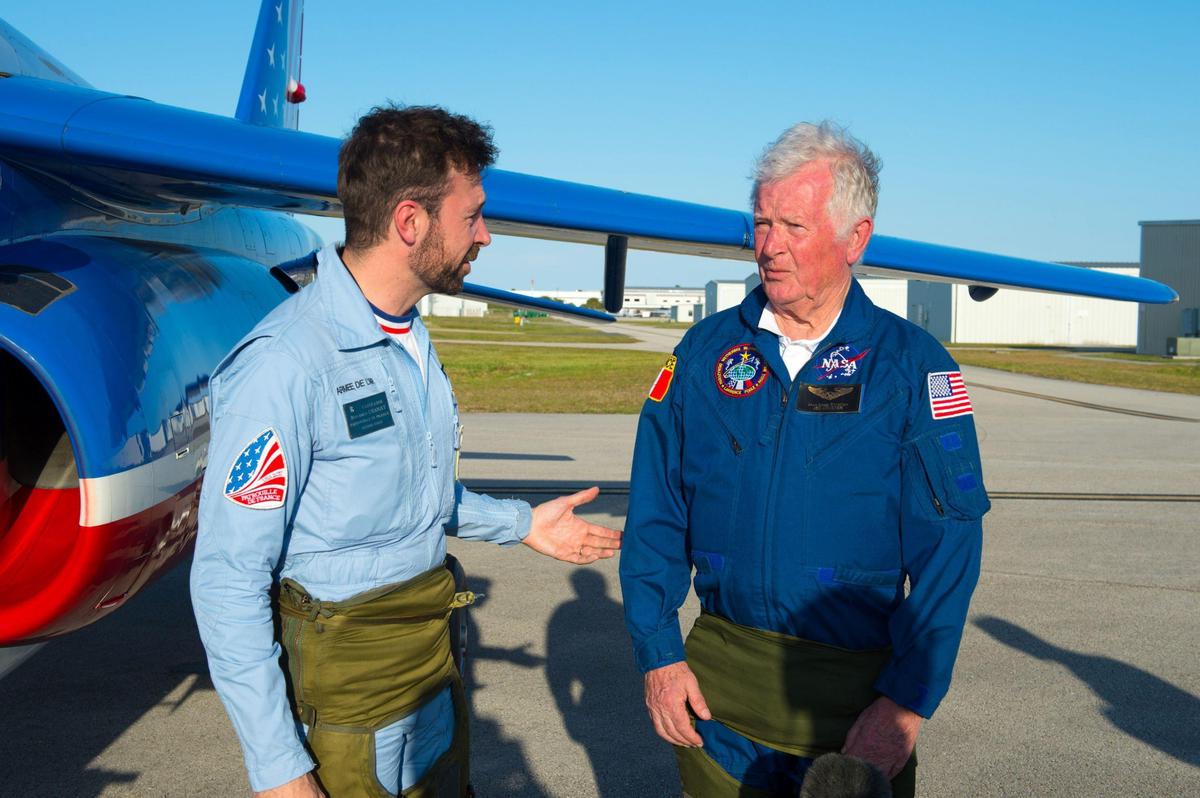 When you became a fighter pilot, did you imagine one day becoming the first Frenchman and the first European to travel into space?

Not quite, but when I started flying school in 1959, I had two brands in my hat: fighter pilot and test pilot. There was a lot of talk about flight tests. Suddenly, in 1961, we learned that the Russians had sent a man into space. I announced to my bosses that I wanted to become a cosmonaut, it made everyone laugh. I was told: it will happen when you are great-grandfather …

The Ciel et Toile festival has pioneers as a common thread. Do you feel like one?

Forty years later, yes. I became an American astronaut at the end of my French mandate. NASA kept me, I have been split between France and Houston since 1994. I switched to a company working in this sector. I am an active pioneer!

Your intervention is followed by the screening of “First Man,” a biopic about Neil Armstrong. Did you like the movie?

Yes, because he is very attached to the personal side of Neil Armstrong. It is not easy to control the privacy, the obstacles it creates for the career. It’s a bit of an obstacle course. The motto for fighter pilots, borrowed from Guynemer, is: “Faire face”.

The film highlights what the conquest of space begins with, a story of technique, careful work on the ground. Behind the dream, is not reality extremely difficult?

You flew with the Soviets. Does not the conflict in Ukraine weigh on the future of space research?

It hurts a little … I know the Russians and Ukrainians well. I look at this with sadness. I do not think there are many competent to stick their noses into this. In this case, we are a bit like the Red Cross. We must treat, help, welcome these people, dialogue with the Russians. Space people, they do their job. I left Houston three weeks ago. There were two Russian cosmonauts in training. Up there it is going very well. The moral of the story is that we must continue to stick together, otherwise there is no more budget. Without international cooperation, we are going backwards.

“I left Houston three weeks ago. There were two Russian cosmonauts in training. It’s going very well up there. The moral of the story is that we have to keep sticking together, otherwise there is no more budget.”

Will cooperation with Russia continue?

How do you imagine the future of space?

In my conference presentations, I use a chart showing human activity over a century in the third dimension. We continued to climb. The first half century had its apotheosis with the landing on the Moon. The second half century is the crossing of the desert. We stayed at the space stations for a long time. We continue because we have nothing else. We arrive at the end of the crossing of the desert with the resumption of flights to the moon. I hope the lunar program prepared by NASA holds. A real village will be created. This is the future. Afterwards we may think of Mars, but we are not there. We can make people dream, but it is not concrete at all.

Private thefts have become a reality.

This gives us a snap in passing! Civilians, not to mention tourists, fly thanks to Elon Musk. We send individuals to the ISS. It means, “Leave us room!” The tourists enter the house. That is really good ! It forces us to turn the page. The ISS was to stop after twenty years. We wonder what will be next. Operating costs are 4 billion a year. Find someone who will pay for this.

Can you recognize yourself in Thomas Pesquet, who has become a superstar?

It is the rug of time that rolls out. This applies to space, science, medicine … Every human step has its extensions. That’s good, we continue, it could have stopped. Some countries have done that, they only had one astronaut in their history. The place should interest the public. The day we put robots in place of men will be of less interest.

“The space must be of interest to the public. The day we put robots in place of humans will be of less interest “

“We’re sending individuals to the ISS. That means: leave room for us! Tourists are coming home. That’s really good! It’s pushing us to turn the page.”