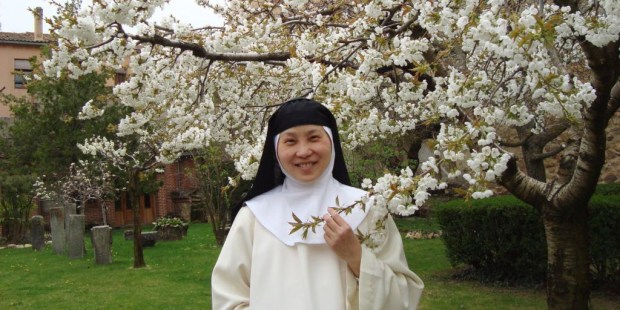 After traveling the world as a flight attendant, Evelyn chose to become a nun. The young woman, who comes from Singapore, tells in an interview given to Fundación DeClausura how she left everything to get into the monastery of Saint Dominic in Segovia in Spain, where she made her vows in 2022. From Singapore to Spain, from the airport to the monastery, discover the story of this extraordinary journey.

Sister Evelyn of the Child Jesus made her eternal vows at the Monastery of Saint Dominic in Segovia, Spain, this year. Former air hostess, she tells in an interview given to Fundación DeClausura, how she gave up a hectic life marked by many trips to live in monasteries and thus dedicate herself to God. For the young Dominican, this prayer life, set back from society, is vital to the world, just as the heart, though hidden, is necessary to human beings.

The former air hostess, who worked on the main lines of her company, discovered new horizons every year. But despite the richness of her discoveries, Evelyn felt a thirst that only a retired life in a convent could quench: “When we begin to feel that we lack ‘something’ because what we have does not fill us, we must be sincere with ourselves and know what we really want. ”

Sister Evelyn to the Child Jesus likes to compare herself to a sentry who says to the world, “God exists. God is there. Eternity is there.”

Evelyn was baptized in a Protestant church and discovered the Catholic Church thanks to a friend. If she is not very religious at this time, she is in search of God. Thanks to her many business trips, she traveled regularly to Rome and discovered the beautiful church of Saint Mary on Minerva, where Saint Catherine of Siena is buried. The young woman then weaves a true spiritual friendship with this great saint: she is touched by her tireless search for the Truth and her faithfulness to God. It was a Dominican brother who introduced her to the monastery of Saint Dominic in Segovia, Spain, where she chose to make her temporary vows in 2018. Driven by her taste for travel, she left Singapore, her homeland, forever on the other side. side of the world to fulfill its religious calling. After thirty years without new vocations, the monastery of Segovia happily celebrates the arrival of Evelyn, who made her eternal vows this year.

The meaning of a monastic life

After traveling the world, Evelyn chooses to live in a convent in a Dominican convent. This kind of religious calling may seem incompatible with the first mission of the Dominican Order, which is the preaching, that is, the preaching of the Word of God and the teaching of theology. Sister Evelyn, however, explains that her life in prayer and brotherhood with her sisters is in itself a preaching: “Although many people do not understand our way of life or know of our existence, the Dominican sister, called by the convent nun, recognizes in a convent. “is to compare with the heart of man. We do not see it, but it is important. Life as a convent nun is just as important to the Church.” She also recalls that every Christian is called to contemplative life, even though the framework of monastic life is more favorable to it.

To live in union with God, Evelyn dedicates herself not only to prayer but also to study, which nurtures contemplation. Studies also allow us to overcome the obstacles that often come from ignorance that hinder our progress toward God. It is thus a matter of illuminating his intelligence with the Holy Spirit. To explain the meaning of this life of prayer and work apart from the world she never stopped going through as a hostess, Sister Evelyn of the Child Jesus likes to compare herself to a sentinel who says to the world: “God exists. God is there. Eternity is there. ” In fact, for the Dominican sister, giving herself completely to Christ is also giving herself completely to humanity.