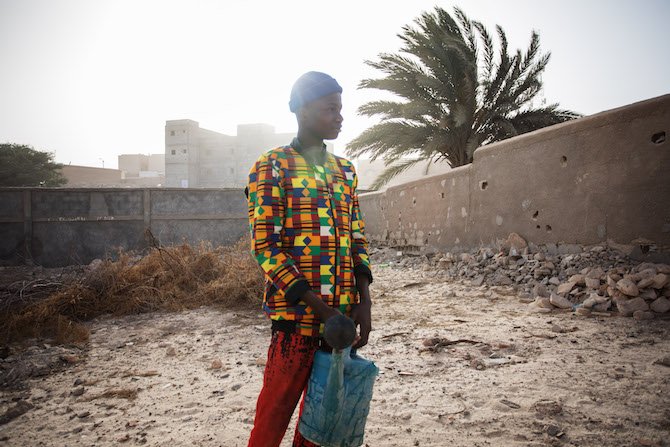 Very often, Nouadhibou is a city where we stop. It is in this metropolis of 300,000 inhabitants, the economic capital of Mauritania, that the railway lines of one of the longest (2.5 km) and slowest trains in the world end, transporting the ore from its mining site, Zouerate, to the sea.

It is also in Nouadhibou that the boats, worn down to the hull in Mauritanian waters, which are extremely full of fish, end up in the cave of the world’s largest boat cemetery. It was at this Aéropostale station, when he was in charge of the Toulouse-Dakar connection, that Antoine de Saint-Exupery made a stopover. It is also in the heart of the desert that surrounds the city, at the time christened Port Étienne, that he located the plot in his novel Men’s land.

For some years now, dreams have also drifted there. Many are stranded in Nouadhibou. Since 2006, tight controls along the Moroccan coast have made this coastal city, located about fifty kilometers from the Moroccan border, the preferred option for thousands of migrants to reach Europe. via Sahara or Canary Islands, a three-day crossing (700 km). Young Senegalese, Guineans, Ivorians, Cameroonians and Congolese have flocked there for hundreds of years. For 300 to 500 € some try the desert road, slalom driving between checkpoints, armed groups and anti-personnel mines. 430 km to Dakhla, in Morocco, the first city after the Mauritanian border. The road goes on.

Other migrants, especially those who have enough to pay, are trying the Atlantic route. For an average of € 1,000, they crowd in canoes or makeshift inflatable canoes heading for the Canary Islands. During this perilous voyage, 40% of the boats will never see Las Palmas. Many are being taken back to the mainland by Mauritanian coastguards and the Guardia Civil (national body of the Spanish gendarmerie), equipped with helicopters, vehicles and thermal binoculars, all funded by the EU and its Frontex agency to “filter” illegal immigration.

More and more shipwrecks are happening. This is condemned by the United Nations (UN) in a report (in English) published by the UNHCR (High Commissioner for Refugees), on April 29, 2022. In 2021, nearly 3,000 migrants trying to reach Europe died or disappeared. on the various migration routes in the Mediterranean – including 1,153 between North West Africa and the Canary Islands. Twice as many as in 2020. In Nouadhibou, the last shipwreck is from December 17, 2021; 15 young migrants died there. But here, everyone remembers the shipwreck on December 4, 2019. That day, 63 people who left Gambia 25 km off Nouadhibou drowned during their 8th crossing day.

Yet the risks do not deter anyone. As some Senegalese repeat in Wolof, it is in the country “Barça or barsaax” “walk or die”. In the dusty city permeated by a constant smell of fish, where the souvenir shops are ironically called Las Palmas, the arrivals and departures of migrants follow each other, with a marked increase since the summer of 2020.

Enticed by rumors of vacancies in Europe

In 2019, 2,687 migrants landed in the Canary Islands. By 2020, there were more than 23,000, almost 10 times as many – a consequence of the closure of borders and the economic crisis in many African countries. Many also mention this rumor circulating in the country, according to which Covid-19 has claimed many victims in Europe and left many jobs vacant. The old world would need massive labor. “I hear this rumor every day among young people”, sugar Pachel Florian Mbabe. Nike hoodie and white sneakers, this Congolese spiritual priest on a mission in Nouadhibou is the galleon figure for the Catholic parish and the Daniel-Brottier Association.

Since 2014, the association has provided humanitarian, health and even spiritual support to migrants: reception, listening, medical care, training of all kinds, visits to prisoners, funerals … Although it has no legal recognition and despite its scarce resources, Red Kors, the International Office of Migration and the Guardia Civil systematically address her. When a boat without ceremonial is returned by the coastguard, when it is necessary to provide water and blankets to the survivors of a shipwreck or to treat young people killed at the Moroccan border, it is Pachel we call.

To leave to be someone

This Saturday morning, the pastor is taking a short break at the municipal stadium in Nouadhibou, opposite the church. He comes to bring two new balls to the young migrants in high socks, who wet their colorful jerseys on the ground. Back to basic for the pastor, for it is on the grass that the history of the association began as it functions today. Upon his arrival from the Congo in 2014, just after his ordination, Pachel Mbabe in Mauritania rediscovered the love of football and his ability to bring people together and restore the morale of young people who were tempted to give up.

By gathering migrants from 14 countries, the pastor became a coach and organized a mini African Cup of Nations. He then forms a football team of migrants. These young people train hard every Saturday morning. For here many dream of honor. “Most Cameroonian, Ivorian, Senegalese and Guinean migrants travel to Europe to become professional footballers”, explains Pachel Mbabe. Everyone dreams of the next Samuel Eto’o, this young Cameroonian who arrived in France without papers in the 1990s and who is now one of the greats.

Team Captain, Boli, “Like Basile Boli from OM”, is a bit like the troupe’s big brother. This Ivorian, a qualified archivist, arrived in Nouadhibou about ten years ago. At that time, he would simply flee Côte d’Ivoire, in the midst of a civil war. A relative lives in Nouadhibou and invites him to seek refuge there. The young man is coming. So eventually settled down. A wife, children, a teaching job in CM2. Around him he sees these young people on the run, arriving in Mauritania and rushing into the canoes or out into the desert, in a hurry to become someone. “We try to make them understand that sometimes dreams can not come true. They risk their lives. We try to keep them, to integrate them into society here. Because if they become integrated, they do not leave. »

Often this speech does not convince at first. Injured by their journey, but stuck on their goals, the young migrants do not plan to stay in Nouadhibou for more than a few months. Time to recharge your batteries, and most importantly your bank account. This is the case with Emmanuel. His eternal blue cap is pulled down over the white headphones that are screwed onto his ears. The soft features on his face reveal his young age: 15 years old. Emmanuel is a Guinean and he is a child. Immersed on the plastic chair in the small room he occupies, he tells in one go his journey in a monotonous voice.

His itinerary is made of those memories that will remain engraved. Goes without telling it to anyone but his mother. The bus to Dakar, which forgets it next to the road after a break. His phone was sold to be able to go to Mauritania. The prices in Rosso, on the Mauritanian border. Arriving at Nouadhibou, and since then the impression of being on stand-by.

Only 10% of migrants reach Europe

As he usually does with the most vulnerable migrants, Pachel Mbabe gave Emmanuel a small job as a gardener for the Catholic mission and found him a place in the parish in a cabin he shares with two other young people, Eden and Bonaventure. Both also dreamed of other places. Like the majority of migrants in Nouadhibou, they have tried to cross the desert several times. Despite their determination, Europe rejects them.

Only 10% of migrants passing through Nouadhibou reach Europe. So like many others, the two boys hung their dream on the coat rack, we’ll see later. Meanwhile, Eden, a Congolese reader trained by the association, has become the parish’s IT specialist. Bonaventure from Mali is a mason’s assistant in this constantly growing city. Here, migrants represent between 50,000 and 60,000 inhabitants (ie 20% of the total population), a consequence of these young people arriving and never having time to leave. They are even the ones who control the local economy: the fishermen are Senegalese, the masons are Guinean or Cameroonian. Yet Mauritanian citizenship is impossible to obtain, even after several years of residence.

Short hair colored blonde hidden by a green hood “So as not to shock the Mauritanians”, Raby Kamara takes us on a tour of her future beauty salon at the Nouadhibou market. About 5 m2 bounded by wooden planks eaten by termites. To dress the walls, the 24-year-old Guinean girl hung dark blue paper with her thumb. He just lacks his equipment: fake eyelashes, fake nails, enamel, locks … Raby also wanted to go to Europe.

In Conakry she lived alone with her sick mother. When she died, her uncles and aunts took over the entire inheritance. True to tradition, Raby moved in with her uncle, who made her a maid in the house before dismissing her. So Raby set off for Senegal. At this point in the story, her tears flow and do not stop. On the roads of exile, the women are very numerous. Invisible, they would nevertheless be the majority among migrants, and particularly vulnerable, raped, sold as sexual slaves. On the way, Raby says she was raped, beaten by Moroccan border guards … She wanted to go to Europe. “But fate decides otherwise”she lets go.

Sent back from the border and then arrived in Nouadhibou, Raby fell in love there with Mohammed, a Togolese migrant. A few months later, Ousmane was born. Well wedged in a scarf, he sleeps curled up against the back of his young mother. Although Ousmane was born in Mauritania, he will never become a national. He will never be able to go to primary school or work normally. But Raby, hated by her family, knows she has no future in Guinea. Trapped between two waters, she builds her life on the sand. On the coast of Nouadhibou, dreams run aground and wear out like garbage lying on the beach. Their reliefs erode, lose their sharpness. But they never really go away.