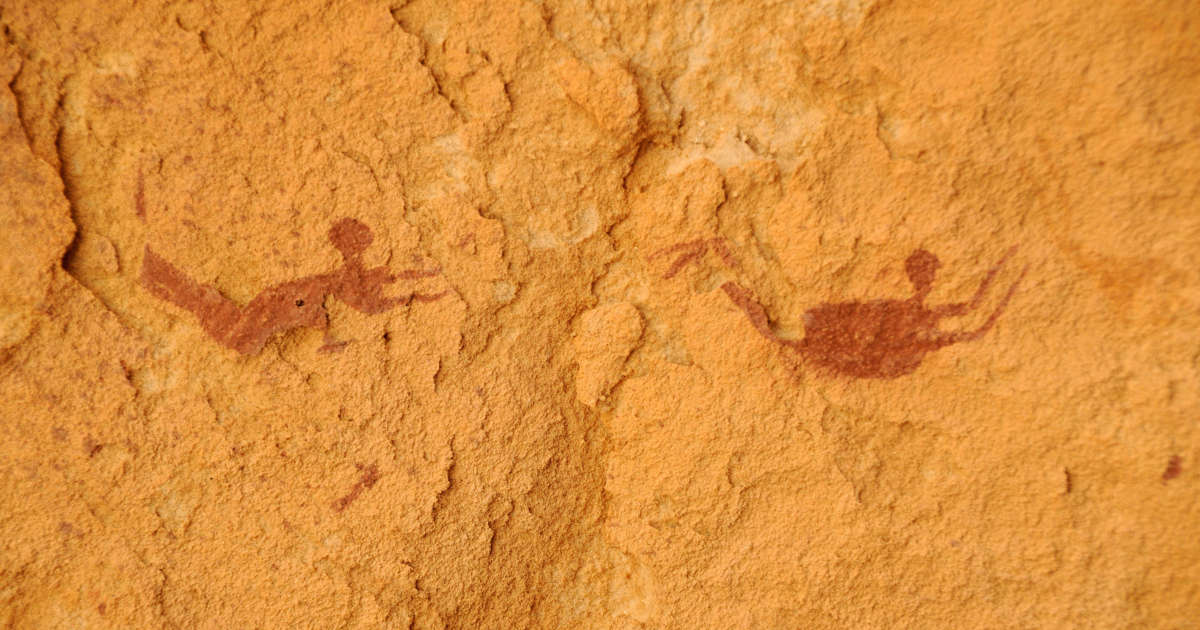 In the far west of Egypt, one of the hardest areas in the Sahara desert, lies a fascinating cave. On its clear walls, hundreds of characters are drawn, some slanted, all enigmatic. Disproportionate human bodies move in procession through rich ocher. The most remarkable thing is that many of them lie on their stomachs, arms and legs horizontally, in a movement similar to swimming. Which raises a fascinating question: why did ancient artists paint bathing scenes in this arid part of the Sahara?

Because the Sahara has not always been a desert. It was once a vast savannah teeming with gazelles, antelopes, lions, giraffes, elephants and humans. Several monuments testify to this abundance, take for example the two giraffes engraved in stone 10,000 years ago at Dabous, in Ténéré, in Niger. “Ténéré” literally means “Where there is nothing”, yet there are two of the finest rock sculptures in the world, testimony to a time when the desert was full of life.

Pastoralism would have accelerated desertification

The Sahara began to dry up 8,000 to 4,500 years ago, and the landscape then became a desert. The monsoons moved further south, followed by large animals, elephants and giraffes, among others. It was long considered a purely natural process caused by movements of the Earth’s orbital axis. However, some argue that Sahara residents, hunter-gatherers living in groups, may have played a role. According to archaeologist David Wright, humans were able to accelerate the desertification of this delicate land as they began to shift from hunting to a pastoral lifestyle and traveling with herds of hungry goats and cattle. Yes, when the lush savannas retreated and food became scarce, men turned to pastoralism, thus speeding up desertification.

It’s just a hypothesis. Some have raised objections: Although it is difficult to estimate the population at that time, it is likely that there were simply too few people to contribute significantly to the ecological degradation of the region. .

There is another, perhaps more worrying possibility: what if the people who left Dabou’s giraffes or the Swimmer’s Cave had not been expelled from their land to change the environment, but by forces completely out of their control?

A fascinating and mysterious culture

Their culture is fascinating, though it remains mysterious. For some, the Swimming Cave describes real scenes of swimming in the lakes that once stood in the area, 160 kilometers from the site. Since these people were traveling, it is quite likely that the person who made these drawings traveled to these lakes. For others, however, swimmers have a more symbolic meaning. Similar figures are seen in the nearby Beast Cave: they appear to be heading towards headless creatures that swallow and abandon them. These scenes are difficult to interpret, but several hypotheses have been presented.

The first is that these creatures are animals, e.g. lions whose heads have been deliberately removed and some of them appear to be caught in fine nets. In addition, rock art in the area shows other dangerous animals that have been deliberately smeared. It is believed that this was a magical practice to neutralize the power of the image: there was a risk of giving life to dangerous or demonic creatures by representing them without this correction. These beliefs later spread to ancient Egypt.

Another hypothesis is that the swimmers represent the deceased, and that the headless creatures are gods or guardians, like Cerberus or Ammout, who announce the entry of the dead into an underwater beyond. The Egyptian texts support this theory, but they must be treated with caution because they are several thousand years later. The Book of Doors describes the dead in these terms: “O drowned who are in the water, swimmers who are in the river, see Re who climbs up in his boat, great in mystery.”

See also the description of the most curious, which appears in Chapter XXVII of the book of the dead :

“The book of worship of the cave gods: what a man must say when he gets there to be able to come in and see that god in the great dwelling beyond.

Greetings, vesters of the West! Salute you guardians of the other world who guard this god and bring news to the presence of Osiris!

O gatekeepers, who guard your gates, who devour the souls and devour the bodies of the dead who pass by you when they are sent to the house of destruction. “

Whatever their significance, these images of Sahara rock art ignite the imagination. The parallels between Sahara’s iconography and ancient Egypt indicate that Sahara’s cultures eventually prevailed. While desertification drove people away from their land and fossilized their art, it also softened the once thorny and inhospitable bog of the Nile, and many Saharans settled there in the 6th century.and millennium BC Although the story of the Sahara sounds like a grim ecological parable, it has also brought a breath of new opportunity. The seeds of Saharan culture were carried away by this breeze and sprouted in ancient Egypt.