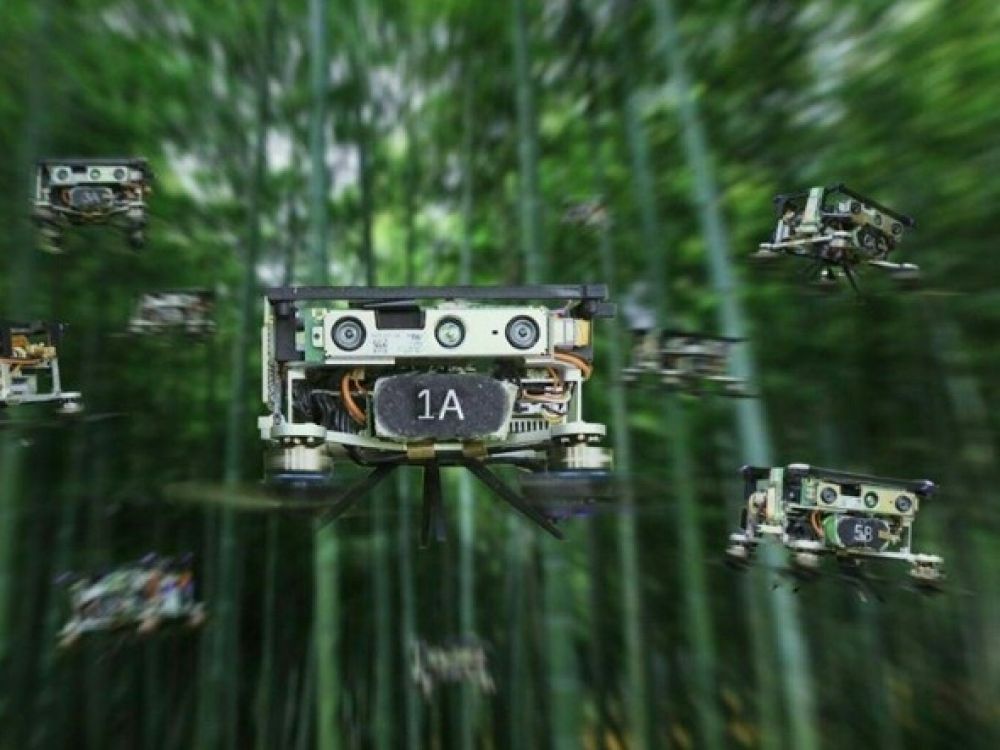 A dense bamboo forest, China. Suddenly, ten small drones the size of a palm rise in a sum. They fly side by side in the same direction towards a target a few tens of meters away and avoid branches, ramparts and other obstacles. In return, they pass through the narrow spaces between the bamboo stalks. All this in a completely autonomous, coordinated way and on land that they discover in real time. The experiment, conducted by researchers from Zhejiang University, evokes a scene from science fiction. Their study, published Wednesday, May 4, 2022 in the journal Science Robotics, also begins by citing movies like “Star Wars,” “Prometheus,” or even “Blade Runner 2049.” “The ability to navigate and coordinate swarms of drones in these films has inspired many scientists. Here we take a step towards such a future.” write the authors of these works.

These machines, specially designed for the experiment, are equipped with a stereo camera, sensors and a built-in computer. Above all, a specific algorithm has been developed. Swarms of drones have already been tested before, but only in open environments or with known obstacle positions in advance, explained AFP Enrica Soria, from the Federal Polytechnic School of Lausanne, who herself has been working on the subject for several years. “This is the first time that a swarm of drones has successfully flown outdoors in an unstructured environment, in nature”she pointed out, calling the experience one“impressive”. These little flying robots “can determine their environment on their own, map it out and then plan their orbit,” she explains.

The applications seem many. Since these drones are not dependent on any external infrastructure (such as GPS), swarms can be used during natural disasters. For example, after an earthquake to identify the damage and where to send help. Or in a damaged building where people can not venture without danger. It is certainly already possible to use individual drones in such scenarios. But with very limited flight autonomy times, sending swarms would save significant time. Another option: transporting heavy objects that cannot be lifted by a machine alone.

What about military applications? Drones are already widely used by the military, and the Pentagon has repeatedly expressed interest in such swarms, which it is also testing on its side. “Military research is not shared with the rest of the world”, notes Enrica Soria. “So it’s hard to know what stage of development they are at.” Could the algorithms that the researchers have developed be used by the army? “It’s part of the good and bad sides of having science in open access”she commented modestly.

Chinese scientists have performed several experiments, including flying through the bamboo forest. In another, the drones were forced to stay in formation. A third test instead made them fly in converging directions, with a human walking in the middle of the area, to prove their ability to avoid each other or a person in motion. “Our work was inspired by birds that fly smoothly in flocks, even through dense forests”, explains Xin Zhou, lead author of the study, in a blog post. The model of insects, with their sudden movements, has instead been avoided.

The challenge, he says, was to reconcile opposing orders: light and small machines, but high-performance computer skills and a safe runway, without adding flight time … When will such swarms be widely used? “We are not that far away”, says Enrica Soria. Tests are still needed in ultra-dynamic environments that e.g. mimics cities where vehicles and passers-by are pushed. Rules must also be adopted, which takes time. But according to her “in the next few years we will be able to have very reliable systems”.