A group of baboons sneak under the carriages of this train lying on a bridge, a hippopotamus splashes in the river below, while a leopard, alone, sneaks around and sniffs which antelope is to constitute its dinner.

You are in the heart of Kruger Park, the huge South African nature reserve, almost the size of Belgium. Guests in the wildlife realm, in a luxury hotel overlooking the savannah, from the golden sunrise to the appearance of a Milky Way, perfectly modeled against the dark night. 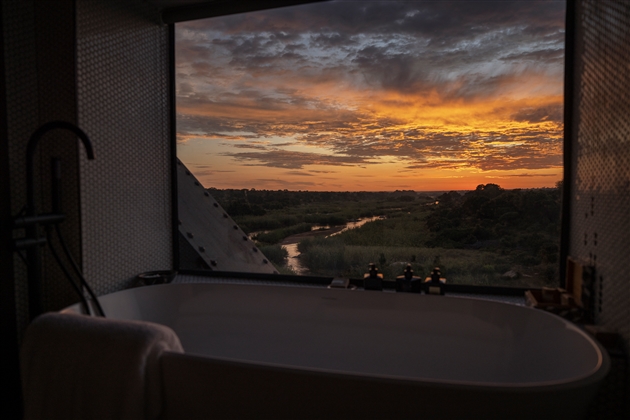 An extension has been built on the quay to house a small round swimming pool, around which a group of people gather at 16.00 in a light breeze at the end of the Australian summer for a “high tea” in British style.

A terrible growl interrupts the chirping of the birds. “It’s a hippopotamus,” a servant reassures. Borrowers bend over the railing to look down the earth-colored Sabie River. Two round ears protrude. “Great,” breathes Karen Lane, 56, who arrived from Johannesburg to celebrate her 30th birthday here with Rich.

A stationary train rests on its tracks

Chichi Mudau, a 36-year-old salesman, Gucci bob and neat manicure, spends three days here with his companion to celebrate his recent birthday. Nothing to say, “I like everything I hallucinate”.

In a few minutes, the group sets off in open carriages to observe giraffes, zebras and elephants up close in their natural environment, chewing grass, playing in the water, colliding in sudden fights.

The bridge, in the middle of this dreamy landscape, had been abandoned for decades. It was this hotel project, a stationary train that rested on its tracks to offer views from above, that won the national park’s tender in 2016. In the 1920s, this railway line was the only access to visit Kruger Park. Fallen in use, its last locomotive came here in 1979. 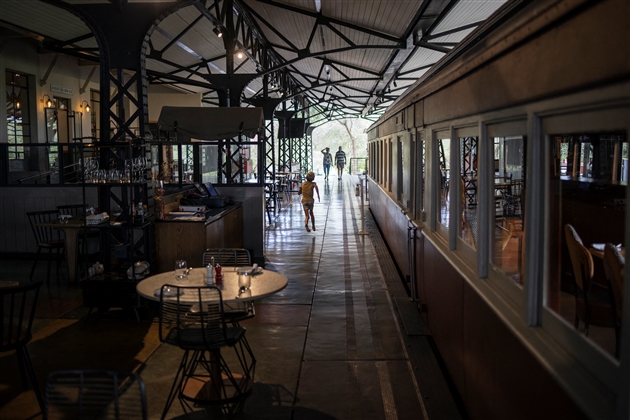 Monkeys that can be aggressive

“We went to a train cemetery to look for decommissioned carriages and patiently restore them,” said Gavin Ferreira, head of operations, to offer “a journey through time” to today’s passengers. . A total of 24 carriages, numbered up to 25, because, hotel superstition obliges, carriage 13 does not exist.

Each contains only one bedroom: large bed hung with fresh sheets and plush pillows, bay windows over the bath and sink that open onto the river on the same side, to observe the fauna while brushing teeth, in a silk bathrobe available. 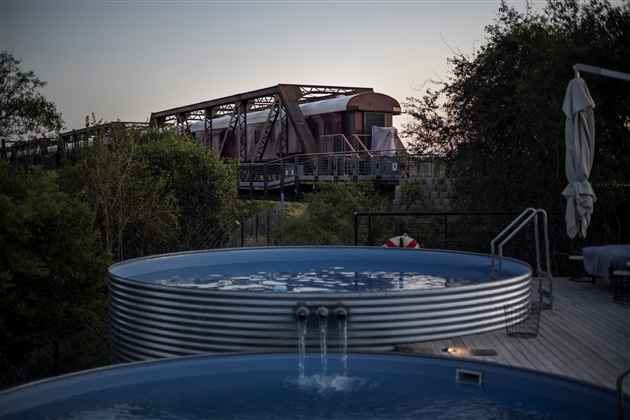 And a small balcony “à la Juliette” is waiting for Romeo, but be careful, remember to close your front door from the bedroom, “we have monkeys around here who can be aggressive”, warns the butler.

When a small gray primate, black mouth in a triangle, climbs up the structure of the bridge to stare curiously at the client, who has sunk together on his bed, through the window, it is hard not to be moved. But be careful … The first months we were done

When the hotel opened in December 2020, due to the Covid pandemic, South African customers favorably replaced the Westerners who were originally expected in this very unique palace. “The first months we were done”, says Ella West, who is responsible for reservations. But foreign customers with the highest purchasing power are essential “to run a business” that is so demanding in terms of service, she emphasizes.

Today, more Americans are being bitten, also seduced by the proximity of the airport just a few miles away, she explains. At the dawn of darkness, the carriage rocked gently with its guests. “It’s a natural movement, linked to the expansion and then the contraction of the metal bridge,” between hot days and cool nights, the boss explains. A bit like a moving train, “but more subtle”, he says with a greedy smile.