“The partnership with Cerema sets method and expertise in our renaturation process, which favors the ecosystem approach. Beyond that, we explore in one experimental logic the various aspects of the peaceful and lively city! “

The waterproofing strategy, the connection with greener schoolyards and the rebuilding of public places

Why should cities maintain permeable soils ? Why should they adopt one alternative management of their rainwater ? The answer is that they have to competecustomization of their territories to climate change : reducing the risk of flooding by limiting runoff on impenetrable surfaces, conserving natural resources by allowing recharging of groundwater, reintroducing nature into the city, revitalizing urban land or even creating overgrown cool islands.

To solve this problem, Cerema has developed a multi-criterion method which makes it possible to assess drainage potentials and added value that such work could contribute to better rainwater management.

That criteria are several: infiltrability and permeability of soil, occupation and use of soil, slopes, rising groundwater levels, swelling of clay, springing groundwater levels or even contaminated soil. Environmental factors are numerous, but they are not the only ones that go into the reflections. Land management, PLUi rules and zoning, or even wilderness areas, also complete this list of criteria.

All of these elements make it possible, once studied, that define strategic areas to act on if we will to optimize the added value of waterproofing works. 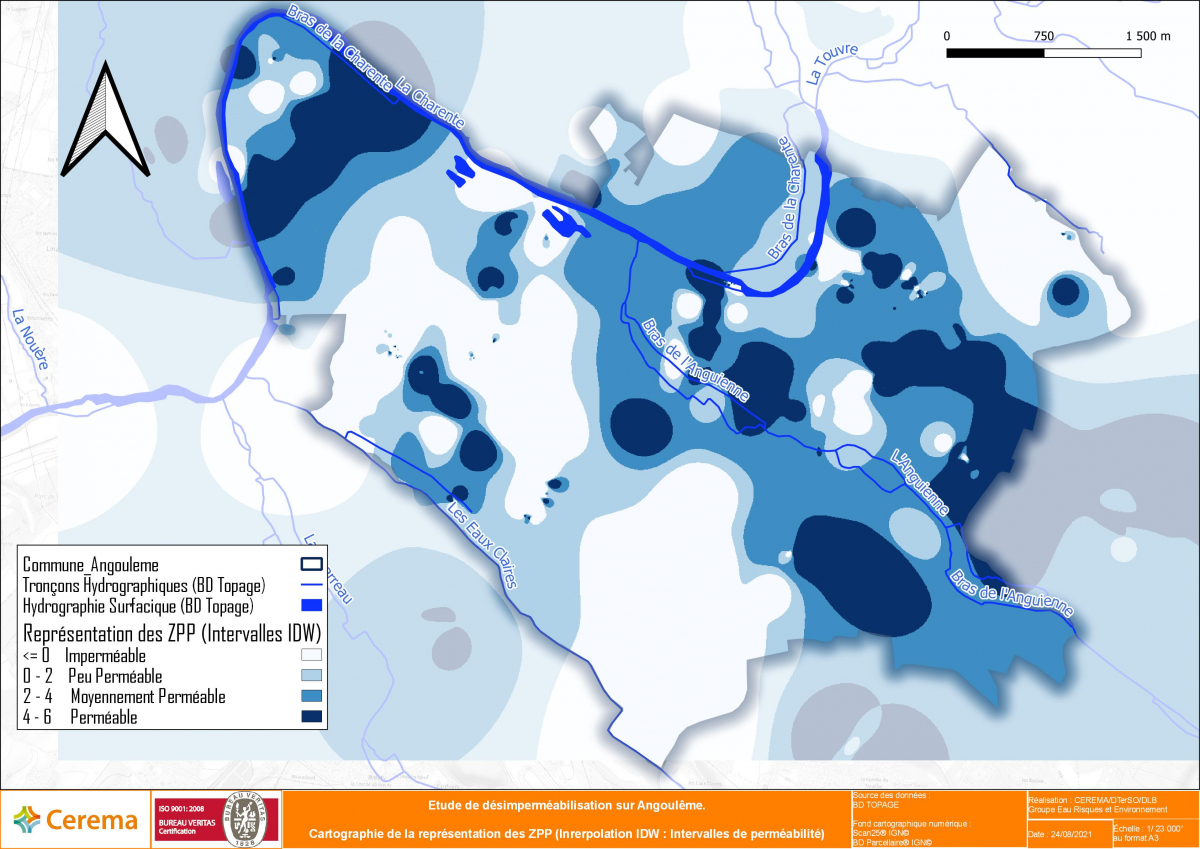 ONE specific approach is dedicated to schoolyards and in public placesby bringing in other criteria: political projects, geographical equality in the city, vulnerable neighborhoods, civic dynamics, percentage of waterproof surface on schoolyards and number of students within the school, or even seniority of work already underway on site.

The municipality wants to rebuild the schoolyards (regrowth, drainage, development of the concept of “school outside”). For this purpose, Cerema’s expertise makes it possible to offer one prioritization of projects by classifying schoolyards by increasing efforts. The approach is identical for rebuilding public spaces. Finally, the community has in its possession a hierarchical list of schoolyards and public places to act on, classified by main types of issues and by added value of the projects.

The city also benefits from support for waterproofing in PLUias well as concrete feedback on good practice to implement this strategy operationally through the various redevelopments planned in its area.

The plan “Green lungs”: where to recreate, why and to what added value?

The city of Angoulême is committed to creating around twenty “green lungs”, in order to offer residents green areas that provide freshness in the summer, and this close to the places of life in each Angoumoisin. Some projects have already been completed, but others are still missing.

What is the “green lungs” plan? The goal, of course, is not just limited to planting trees, it is more general restore the city. Cerema’s work here focuses on crossing of all data hitherto existed in the renaturation fields, to reject it to one planning process projects:

Thanks to the preliminary studies carried out on the green and blue grids as well as by the drainage of the soil (1st and 2nd part of the partnership), but also based on the mapping of urban heat islands, on the mobility diagram, on the counting of urban wastelands, and on a long a number of societal criteria (equal distribution across the territory, proximity to places receiving vulnerable users, citizen requests, etc.), Cerema offers a action plan for the renaturation of urban spaces with a hierarchy of projects to be executed.

Once this renaturation strategy has been implemented, the city has a timetable for carrying out projects to be carried out over time and throughout its territory, built in accordance with the natural problems, but also with the needs of the inhabitants and the constraints of the economic community.

Roll out the study in two demonstration sites: a way to assess and raise awareness

At the same time, Cerema performs one evaluation before / after adjustments to highlight all the improvements that the works have made possible (lower temperatures in summer, better management of rainwater on the site, improvement of the landscape, creation of support for biodiversity, increased pedestrian traffic, residents’ feelings for development, better accessibility to public space, etc. ).

The results thus obtained will make it possible educate the residents by giving them objective profit figures caused by the renovations. The ambition is to make these two projects into demonstration sites, which will be duplicated in the Angoumoisin area.

In the longer term, an objective for this type of project may be to invest in other aspects of the nature of the city by supporting the community in a project to determine the black framework (ecological continuities for nocturnal species) and strategy for implementing “Zero net set-aside” politics. The variation of urban green frameworks with a “biodiversity and building” approach could also be considered.

Angoulême, whose city center is classified as a “protected area” to protect and enhance its architectural and historical heritage, wants to apply this natural vision to its territory for the benefit of the quality of these public spaces. The approach is intended to be cross-cutting and co-constructed and therefore involves many actors: many urban and urban areas (urban planning, roads, green areas, mobility, ecological transformation), several associations, the Ministry of Culture and the Building Architects in France, INRAE, DREAL, Adour Garonne Water Agency and Center for Technical and Economic Studies in Forestry.

Cerema supports medium-sized cities to confirm their role in tomorrow’s territorial landscape. Through this partnership, the nature of the city is put at the service of the quality of the public spaces.

This research and development partnership takes place over a period of three years and is subject to financial support from the Ministry of Ecological Transformation, ADEME, the Adour Garonne Water Agency and the New Aquitaine region.