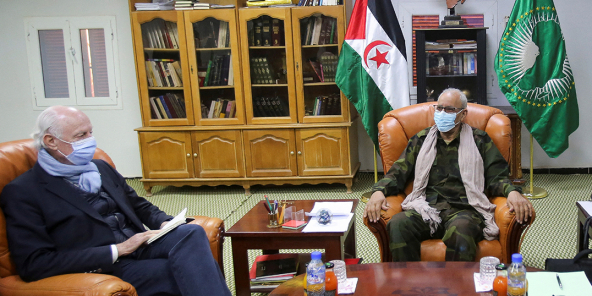 More than a revelation, a confirmation. In the ranks of the Polisario front, cacophony reigns. The visit to Tindouf on 15 and 16 January by the UN Secretary-General’s (UN) personal envoy for the Sahara, Staffan de Mistura, has also continued to sow the seeds of division.

January 14, the day before the UN envoy’s arrival in Tindouf, Sidi Mohamed Ammar, representative of the Polisario Front to the UN and coordinator of Minurso, held a press conference from the Boujdour refugee camp.

Against all expectations, the diplomat rejected the possibility of a referendum. According to the latter, “the front no longer considers the self-determination vote a possible solution, but clings directly to its legitimate right to the total independence of Western Sahara”, before adding that “the Sahrawi people uphold their right to defend themselves. With all legitimate a logical position, in so far as Polisario itself announced the end of the ceasefire that has been in place since 1991.

The UN representative legitimized the armed struggle, confirming that the Polisario “is still determined to fight”

In the wake, however, Sidi Mohamed Ammar is contradicted by Abdelkader Taleb Omar, the representative of the Polisario in Algiers, who in turn praised the benefits of the referendum, “the only solution that is likely to solve all the problems”. Brahim Ghali, for his part, President of the Saharawi Arab Democratic Republic (SADR), played the balancing act against Staffan de Mistura on 16 January.

The leader of the front reiterated his movement’s readiness to engage in UN-sponsored negotiations and expressed its support “for any peaceful operation that allows the Sahrawi people to exercise their right to self-determination and independence”. And it’s a shame if the referendum is no longer one of the options favored by the UN.

At the end of this meeting, Sidi Mohamed Ammar did not separate, even though he was a bit rejected by his boss and his peers, on the contrary. The UN representative legitimized the armed struggle, confirming that the Polisario “is still determined to fight until SADR’s full independence”.

The war to continue to exist?

By blowing hot and cold, Polisario was simply trying to put a spoke in the wheels of Staffan de Mistura, who was on his very first visit to the Maghreb?

According to Bachir Dkhil, founder of Polisario in the 1970s to fight against the Spanish occupation, and who has since left the organization, it was more of a form of show politics. “Sidi Mohamed Ammar is a young leader whose path within the Polisario remains unclear. He pretends to embody a kind of relief to the power of Ghali from New York, but that is impossible. At best, it obscures the tracks it gets the rest of the world to believe that there are conflicting currents, even a form of balance of power.

There are groups that want to take power, but the faction that rules is Brahim Ghali from Reguibat, the majority tribe in the Sahara. It has control over the front armament, and it is directly supported by Algiers, dampening any attempt at a putsch. But of course there is a lot of disagreement, ”he says.

In any case, in order to lead Polisario, radicalism is an irreplaceable condition for Algiers, favorable to the continuation of the armed conflict with Morocco, “otherwise Polisario and its leaders will no longer have any future or reason to exist,” Dkhil points out. .

As a result, in recent months, Brahim Ghali and his men have called for an “intensification of the armed struggle”, sometimes even attacks beyond the Moroccan security wall.

In addition, all the potential successors to Ghali, considered by Algerian Army Chief of Staff Saïd Chengriha, are the hawks of the organization. Among them Abdellah Lahbib, who died of the consequences of Covid-19 in August 2021, and who called for the prolongation of the armed struggle on Moroccan territory.

Before his death, he had moved from the “Ministry of Defense” to the “Ministry of Documentation”, a degradation that was the cause of his breakup with Brahim Ghali. Algerian officials then embarked on a lengthy mediation to persuade Lahbib to accept his duties.

General Chengriha’s two other favorites still alive are none other than Abdelkader Taleb Omar, who declared that “the war would not stop until the end of the Moroccan occupation”, and Mohamed Lamine Ould El Bouhali, chief reserve militia, who goes in favor of a “stronger reaction” against Morocco.

Problem, Taleb Omar belongs to the Ouled Dli tribe, known for its protesting past. While El Bouhali would be proclaimed by all the tribes of the place. As for peace, “the desire of many in the Polisario camps,” according to a person familiar with the organization’s internal struggles, we should not think about it.

In 1976, the first president of SADR, El Ouali Mustapha Sayed, was assassinated by the then Algerian president, Houari Boumediene, because he advocated some form of normalization and negotiation with Morocco, Bachir Dkhil recalls.