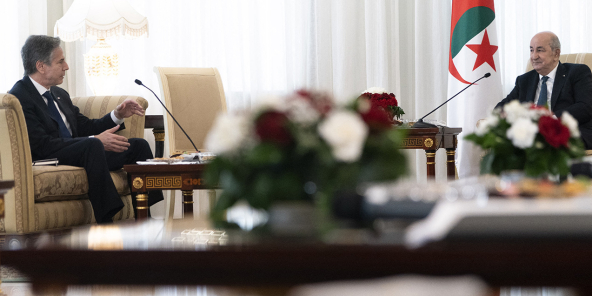 Algerian President Abdelmadjid Tebboune on Wednesday (March 30) gave an audience to US Secretary of State Antony Blinken, who had just concluded a visit to Morocco. In this interview, the wording of which was published by the Ministry of Foreign Affairs and a video excerpt of which was leaked, the Algerian president discusses in detail the disagreements and alienation with Morocco, as well as the issue of Western Sahara, which continues to poison the relationship between the two neighbors. Explanations and extracts from verbatim.

The War of the Sands

On Tuesday, October 8, 1963, clashes broke out between soldiers from the Algerian army and a division of the Royal Armed Forces (FAR) at a place called Hassi Beïda, not far from Colomb-Béchar (now Béchar, Algeria).

Very quickly the fighting spread to the region of Tindouf and Figuig (Morocco). “War of the Sands” will last almost three weeks before the ceasefire on November 5, 1963. According to the Algerian president, it is Morocco that has started the hostilities in this border conflict.

To the “continuity” of the Algerian position he puts forward, President Tebboune is against Morocco’s supposed duality.

“We have the Kingdom of Morocco, which the relationship has always experienced ups and downs since our independence. It is not new and it is not due to the issue of Western Sahara. There are two mentalities, two ways of looking at things. We respect the people, we respect the borders of the peoples, while they (Morocco, editor’s note) can expand.You know that no one has forgotten, no Algerians will forget that Morocco attacked us in 1963. We did not even have a regular army.They attacked us with special forces, helicopters and planes. We had 850 injured. “

The whole challenge for the Algerian president was to present his neighbor as a destabilizing factor in the region, which Algeria would not be the only one to complain about. The Algerian president thus accuses the kingdom of always pursuing territorial claims not only on Algeria but also on Mauritania.

Faced with his American host, who probably did not ask for much, and who said very little during the interview, Abdelmadjid Tebboune took the opportunity to rewind the course of events and explain that “it was not until 1972 that the King of Morocco leaves helping to shake hands with the Mauritanian president and finally recognizing Mauritania’s independence twelve years after its proclamation, in 1960 ”.

Abdelmadjid Tebboune accuses the Moroccans of playing a double game in the Sahara issue, which according to him is not the primary cause of the tensions between the two countries. To the “continuity” of the Algerian position he puts forward, President Tebboune is against Morocco’s supposed duality. To Antony Blinken, he confirms that Algeria has documents that would prove that Hassan II advocated the solution with self-determination.

The conflict would not be motivated by political-economic interests, but by Algerian diplomatic doctrine

The Algerian president regrets that the borders are still closed “fifty years after independence”, and presents Morocco as a neighbor with unwarranted aggression: “They have always wanted to destabilize Algeria. I do not know why, when we have always protected Morocco. A little music (and an exercise in rewriting history), which suggests that Morocco, far from seeking to ease tensions with Algeria, would rather have tried to exacerbate them.

In its long monologue on tensions with Morocco, the Algerian head of state did not hesitate to draw a parallel between the issue of the Sahara and the issue of Palestine, South Africa under apartheid, East Timor or the Comoros.

The conflict with the neighbor would thus not be motivated by political-economic interests, but by the Algerian diplomatic doctrine, linked to the struggle against colonization and discrimination. And to quote the relationship with Indonesia, as to better demonstrate that Morocco is in bad faith in this affair:

“Our position vis-à-vis Western Sahara […] is the same as against East Timor. We ended up convincing our Indonesian friends that we were very close that they had to drop East Timor and give it independence. And that’s what happened. And we stayed very close to Indonesia. »

One question remains: the publication, almost in extenso of the Algerian president’s remarks, as well as audio excerpts of this interview by the US State Department – an unusual practice in diplomacy – has it received approval from Algiers? In the absence of an official response, it is clear that their content demonstrates both the blocking of Algerian software on this issue – Abdelmadjid Tebboune, given that the dispute between the two countries is somehow linked to independence – as well as the absence of evt. prospect of a negotiated solution to the conflict, seen from Algiers, as long as the current power remains in place.