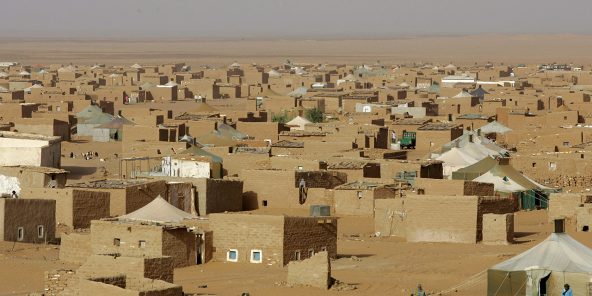 A birthday that turns into tragedy. In the Tindouf camps, on February 27, the 46th anniversary ceremony of the Saharan Arab Democratic Republic (SADR) was interrupted after the outbreak of clashes that were so violent that they forced Polisario to expel the foreign guests present.

in question? A tribal conflict that degenerated into a bloody gun battle involving various groups of the Reguibat tribe – one of the largest tribes in the Sahara to which SADR President Brahim Ghali (Ouled Taleb) belongs – and the forces of the Front Polisario.

Strong tensions have thus created members of the Ouled Moussa and Bouihat tribes, who are demographically dominant and who both belong to the large Reguibat family. These two groups, which were already in conflict over plots of land in 2019, faced each other again in mid-February.

It all started with a fight between the two clans, in which a member of Bouihat had his vehicle stolen, later found at the home of a man from Ouled Moussa. A few days later, an SUV filled with goods belonging to a Bouihat was set on fire in the Smara camp. The victims of the pyromaniac attack then went in search of the perpetrator: an Ouled Moussa was arrested and handed over to the police in the Polisario by Smara.

But the accused was quickly released by the authorities. The decision sparked a wave of anger among Bouihat victims, several of whom then attacked the Smara police station and kidnapped three police officers they believed were involved. The latter are detained for several hours before their guards decide to seize a police vehicle.

On the Bouihat side, there is no doubt that the police act in a biased manner and show tribal favoritism for their harm. The Polisario Front Police Corps is mainly composed of members of the Ouled Moussa tribe. The story between Bouihats and the police goes back to the arrest of a young Bouihat in early February who was allegedly tortured by the police.

The day after the police attack in the Smara camp, the reaction from the Polisario forces was serious: raids and targeted shootings on the houses of those involved.

Drama under the Polisario tent

The clashes between the Bouihats and Polisario forces broke out again on the day of the ceremony. On the sidelines of the event, demonstrations took place to protest against the repression of the authorities. The situation degenerated, the tent reserved for receiving foreign guests, fire broke out, security officers were the target of stone-throwing, and vehicles belonging to Polisario were destroyed.

Polisario forces are trying to disperse the crowd and open fire. No precise assessment is communicated, although Mohamed Salem Abdel Fattah, head of the Sahrawi Observatory for Media based in Morocco, without further details mentions “many victims, both among those involved in the clashes and other unarmed civilians”. The confrontation circle expands as another tribe, the Souaden, decides to ally with Ouled Moussa, with whom they are related, against Bouihat.

“The different tribal groups clashed before the Polisario militias came into play. This intervention only made things worse and intensified hostilities and clashes between tribal groups,” explains Mohamed Salem Abdel Fattah.

On 27 February, the intensity of the violence was such that the Polisario requested reinforcements from Algerian General Mustapha Ismaili, head of the Third Region, to ensure the protection of foreigners and ease the crisis. But the arrival of an Algerian military unit near the camps irritated only the warriors. The latter refused to negotiate before pushing them to leave the premises.

According to several sources, the protesters went so far as to burn down the police headquarters in the Smara camp and its annexes in Aousserd, information which is difficult to verify given the opacity of the data. The following day, Polisario police launched a full-scale arrest campaign. Again, no figures were published.

This triggering of violence interferes with a weakening of the Polisario leadership and the return of tribal logics. Some tribes consider themselves offended in the distribution of political and economic power, especially with regard to the control of the various traffic taking place in the area. The different groups use their influence to control crossing points or access paths.

Regularly, these fragile balances trigger quarrels between members of different societies. Mohamed Salem Abdel Fattah, puts the connection between this situation and the events of February 22: “What happened is the result of internal struggles between armed groups, which are permeated by smuggling.”

In a report published in October 2021, UN Secretary-General Antonio Guterres discusses the intrusion of armed groups and smuggling gangs into the area where Polisario is active and the diversion of humanitarian aid.

“Deteriorating conditions in the camps are causing young people to turn to illegal activities such as smuggling,” said a source familiar with the organization’s power play.

The three tribes involved in the February 22 clashes (Bouihat, Ouled Moussa and Souad) have been established in the disputed areas between Polisario and Morocco. In these heavily militarized zones, the movements of the Sahrawis on both sides of the border are particularly limited. These obstacles to freedom of movement nurture feelings of powerlessness and encirclement, exacerbating the tensions in the camps.

The Tindouf camps have a specificity: they are officially administered, not by the host country – Algeria – but by SADR, which is considered a republic in exile. It is therefore the Polisario that is empowered to exercise administrative, judicial, police, military and political powers in the area.

But Algeria is urged to directly monitor the camps to protect the refugees and prevent all forms of repression. “Given the methods adopted by the Polisario forces (…), it is appropriate to emphasize the responsibility of the host state to ensure that refugees enjoy all their rights recognized by refugees,” adds Mohamed Salem Abdel Fattah.

The Bouihaters believe that Ouled Moussa is favored by the police

Following the events marking the 46th anniversary of the SADR, the Polisario organized reconciliation meetings with the leaders of the tribes in conflict. But the authority of these leaders is gradually being diluted, especially among young people who have grown up in the camps and are less sensitive to their moral authority.

Thus, during attempts at conciliation, the members of the Bouihat tribe maintained their hostile position towards Ouled Moussa, whom they consider to be favored by the police. Opposite, Ouled Moussa said they were “concerned” about their girlfriend’s safety. They also urged them to stop cooperating within Polisario’s security forces.

On March 9, during the 49th session of the UN Human Rights Council in Geneva, Sahrawi activists condemned “the violations, forced disappearances and atrocities committed by the Polisario in the Tindouf camps on Algerian territory.