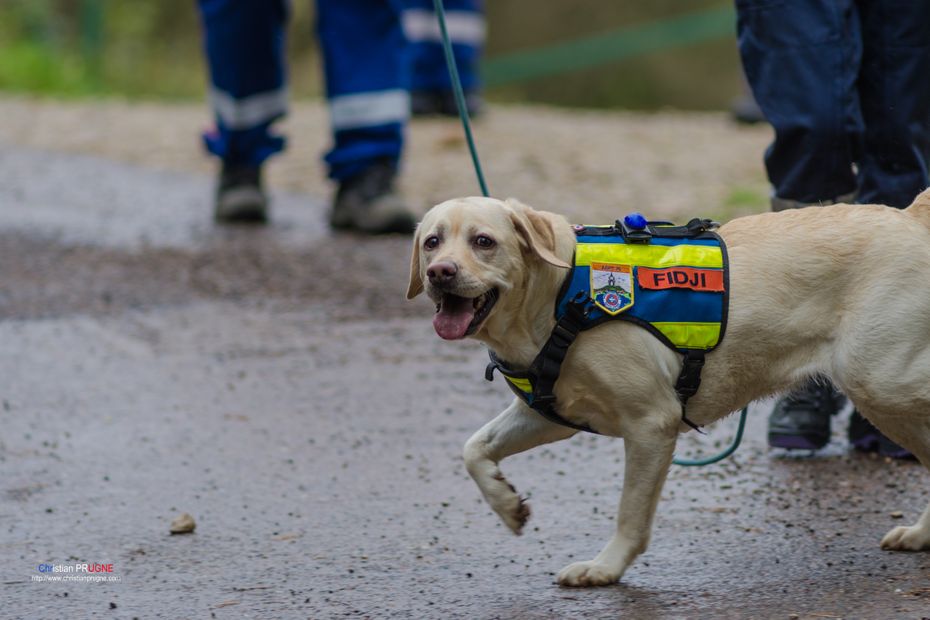 The civil protection in Haute-Saône has just lost one of its own. Fiji, an 11-year-old female labrador is dead. The dog specialized in searches for missing persons or searches in the rubble. His departure leaves a great deal of grief. And reveals more than ever the use of these animals very close to their master, both volunteers.

It is with great sadness that the civil protection in Haute-Saône mourns the disappearance of Fiji, a search and rescue Labrador dog that contracted the disease at the age of 11 years.

On their Facebook page, Civil Protection volunteers describe with pain and great respect who was their travel companion. “Goodbye Fiji and thank you for all you have done for us”.

Fiji was the first dog in a family, that of Nathalie and Renzo Zanchetta, president of civil protection in the rural department of Haute-Saône.

The dog had been operational in the field since 2013. “Fiji was the team’s first dog. She had a gift for research. She taught us everything. Versatile, she was just as good at tracking people as she was at searching the rubble. She is a female dog who knew how to be disobedient when she was right ” witnesses with pride Renzo Zanchetta.

‘What sticks in my memory of her is that she never gave up. During her initial search, she had done a wonderful job. She was extraordinarily combative “ witnesses Nathalie Zanchetta, who had trained her dog over the training. “It takes about two years to train such a dog”. Hours and hours of training, with still a minimum training per week for Fiji.

Between Fiji and his mistress Nathalie there was a long queue and a lot of love and respect.
“We build trust between man and dog to best carry out the mission we have been entrusted with. In search of people, tracking, the dog is led. He has flair. The invisible things, it is the dog that sees them, we must ignore the rest “ remembers Nathalie, secretary of life and one of the volunteers in the civil protection in Haute-Saône.

Nathalie and Fiji marched in Paris on the occasion of the 50th anniversary of civil protection.

Fiji was decorated in late 2021, for all its years of good and loyal service as a search and rescue dog, with the Civil Protection “Grand Gold” medal.

Fiji and Nathalie were a couple who were a symbiosis between them. One had the impression that there was an electric cable between the master and the dog. Fiji was an extraordinary labrador, he was the dog of his life.

Renzo Zanchetta, President of Civil Protection of the Haute-Saône

Fiji had not been on the field for a few months. “We wanted her to enjoy her retirement, that was unfortunately not the case”.

Fiji participated in about forty operational searches for missing persons on judicial requisition in favor of investigations conducted by the National Police and the Gendarmerie in Haute-Saône and Belfort Territory. It operates mainly in urban areas. It was part of the world’s emergency aid, which would probably intervene abroad in connection with an earthquake, for example.

In Franche-Comté, the female dog was called most of the time when the police dog team was not available. “I remember one day she had found a runaway teenager, he had no choice, Fiji had followed her home.” remembers Enzo Zanchetta entertained.

The searches carried out by these specialized dogs do not always make it possible to find the victims or missing persons. “It can be frustrating. Sometimes the dog stops in front of the bus stop where the person got on … or at the edge of the water. Even if you do not always get to the victim, it allows investigators most of the time to have directions.” adds the owner from Fiji.

After Fiji’s disappearance, Popsy, a 3-year-old Labrador dog, takes over. The two dogs had lived together for several months. “We will look for these dogs in the farms when they are three months old. We start training them through play. This is the training method. The dog will then please its master ” explains Renzo Zanchetta.

These search dogs are a rare skill in the branches of civil protection. Nathalie continues the adventure with a female labrador. Labrador or Malinois, these tracking dogs are also present in the dog brigades of the gendarmerie or police. Popsy will follow in the footsteps of her eldest, Fiji, with the departments of Haute-Saône and Territoire de Belfort as focus areas.