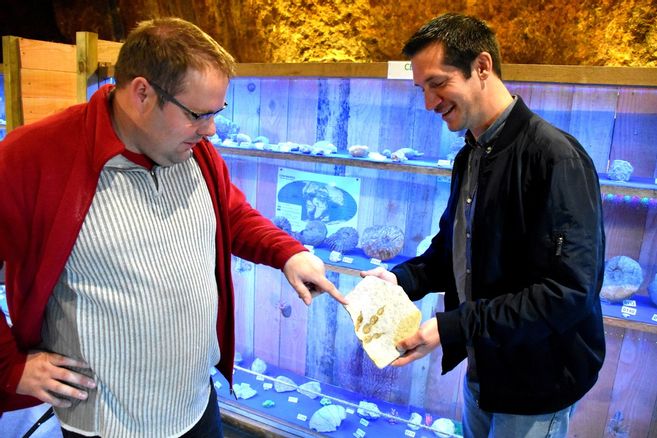 On the heights of Verdigny, the cellars of La Perrière overlook the Sancerre hill. Former quarries that have become vineyards have been dug into rocks from the Jurassic period, that is, about 160 million years old. An ideal setting for a journey back in time to the time when Sancerrois was an ocean.

This trip is what the House of Geology offers. Since being set up by the Association of Geologists of Sancerrois (AGS), it opens its doors to the public this Saturday morning and begins its very first season. Visitors will be welcomed there until October, every weekend, and from Tuesday to Sunday in July and August.

AGS enthusiasts make no secret of the fact that they were “impatient” to finally launch the first season of this place dedicated to science, as they imagined and set it up from A to Z. Because it is years since the project stood their heart close. . “From the association’s establishment in 2013, we wanted to present the fossils we had discovered, entrusts Alexandre Polanowski, president and co-founder of the AGS. The idea of ​​the House of Geology took shape in 2018.” Then it became a reality in 2019 at the Caves de la Mignonne in Sancerre.Unfortunately, the pandemic occurred, which prevented the start of the 2020 season.Then the underground space was closed to the public for security reasons.But the association ended up finding other basements to realize this old dream.

Ammonites, trilobites … The House of Geology exhibits an important collection of fossils. “Many have been found in Sancerrois,” the chairman of the IMF stressed. In the large room with stone ceilings, glass showcases give a glimpse of the fauna that once inhabited the oceans. A space is dedicated to recent relics from prehistory. You can observe the castings of fossils of foremen and saber-toothed tigers, carved stone tools …

Its roots grow in Sancerrois, and the AGS wanted to highlight the close connection between the landscapes, their rows of vines, and the soil on which they grow. A giant geological map of the vineyard also welcomes visitors – this unique document was created by Nicolas Charles, a geologist at the National Geological Service and a member of the AGS. Samples allow you to learn how to identify flint, marl and caillottes, the various local wine-growing areas.

For the association, fossil does not mean immobile. She opted for “a playful digital tool”. And thanks to tablets, the visit to the collections is enriched with sound, images, videos … This allows you to immerse yourself for millions of years back.

For this pilgrimage from law to prehistoric times, from one fossil to another, visitors have an optional guide, paleontologist Yves Coppens. Discovering the famous Australopithecus skeleton nicknamed Lucy, he offered his sponsorship to the House of Geology. “He agreed to lend his voice to the audio commentary,” said Valentin Carayol, secretary and co-founder of AGS. It’s a chance! Especially since he is used to this exercise. When he recorded the lyrics, he did not have to make a lot of recordings! And he likes to transmit. »

In total, it takes almost an hour and fifteen to walk around the Maison de la Géologie. “Get the current situation, we have decided to offer a single price of 5 euros at the entrance, states Valentin Carayol. Inflation should not prevent access to culture and leisure. AGS enthusiasts have planned a small shop dedicated to geology. Already now they have projects in mind. “We have arranged a space for temporary exhibitions,” they point out. And there is still room to present news in the coming seasons. ”