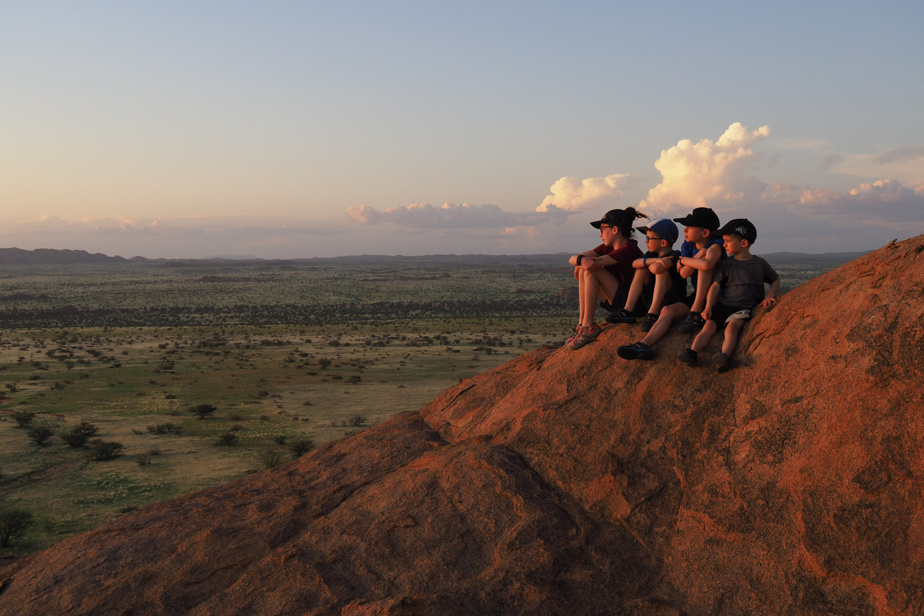 In February 2020, The press told the story of Edith Lemay and Sébastien Pelletier, who were introducing their four children to the world, three of whom have a degenerative eye disease. It was only last month that they were finally able to leave. We joined Edith in Namibia, where the family is embarking on their years-long journey.

They were to travel in July 2020 and begin this crazy adventure aboard the Trans-Siberian train between St. Petersburg and Mongolia.

Needless to say, the plans have changed. Edith and Sébastien had to postpone their journey countless times, depending on the waves of COVID-19 and border closures. The itinerary should also be reviewed, as Russia is not exactly an election destination at the moment.

Pyt, Edith Lemay and Sébastien Pelletier have not given up their project, and it was on March 21 that they were able to hoist the sails, with Namibia, in southern Africa, as their first destination. Why, Africa? Because when the route was planned for the fifteenth time last winter, Asia was closed to visitors and Latin America was difficult to reach at national borders.

“Sometimes nothing happens for nothing. No matter how hard it was to push back and push back again, the trip we’re doing right now is just … crazy,” says Edith, who we reached last week in Windhoek, The capital of Namibia It was 9.30 pm and the children had just gone to bed. Next to Edith, Sébastien was talking to her banker.

For just over a month, the Boucherville family has been dazzled by Namibia’s landscapes and vast open expanses. And that’s why it’s there: Parents want their children to fill up with the beauty that the world has to offer. Mia, 11, Colin, 6, and Laurent, 4, all have retinitis pigmentosa. This genetic disease, which affects one in 3,500 people, results in a gradual loss of peripheral vision, often from adolescence, to complete blindness in adulthood. Leo, 9 years old, escaped the disease.

So far, the small tribe is doing fantastically well.

I expected it would be a bit intense to start in Africa, camping, but honestly, it’s going really well, really. It is even easier to camp here than at home. At the campsites there is running water, private shower. It’s really cool.

The family, who rented a car and camping gear, first set out on a loop through southern Namibia.

Edith tells us about her visit to the ghost town of Kolmanskop, planted in the middle of the Namib desert. Built in early XXand century, Kolmanskop had its heyday in the 1920s, when diamond mining was in full swing in the region. The sand has now regained its rights. “As it is in the desert, the buildings – the luxurious ones – are super well-preserved,” says Edith. The walls are all in different colors. »

The family also took several desert hikes and sunset hikes. She tried the dune board (sandboarding) and saw lots of animals, from giraffes and penguins to zebras and leopards. Leo, 9 years old, asked if they were real giraffes, he was so surprised to see them show up.

The day before the interview, they even climbed into a dune more than 450 m high early in the morning to watch the sun rise. Once at the top, after a sustained effort, the wind picked up. “We had the wind and the sun in our faces. I tried to take pictures, but it shows that it was a pleasant zero-moment! “Sends Edith off with an outburst of laughter.

Between all these adventures, Edith and Sébastien go to school at a distance with the three eldest, often in the afternoon when it is too hot for outdoor activities. They find themselves a corner of shade or better, a poolside. Colin, who goes to first grade, is learning to read and write.

You can hear it: Edith is relaxed.

“I’m not usually an anxiety person, but last year, with COVID-19, I had a hard time,” she says. Being outdoors all the time recharges my batteries. »

Edith talks about her journey on her Instagram page, Full Their Eyes. She thus attracted the attention of several media outlets in Canada and elsewhere in the world. The British newspaper The Guardian and a New Zealand radio station has requested an interview with her. Production companies have even approached her to make a documentary about their journey.

Edith, Sébastien, Mia, Léo, Colin and Laurent have just left Namibia to cross Zambia by train to reach Tanzania, where they will be staying for five weeks. They then think of going to Turkey and then to Mongolia. Afterwards, they will probably go down to Asia, but nothing has been set in stone yet.

If the pandemic has taught them one thing, it is that you should not have a set plan. And finally, this freedom makes them very happy. “I prefer to follow the mood at the moment,” says Edith.

Nothing happens for nothing, right?