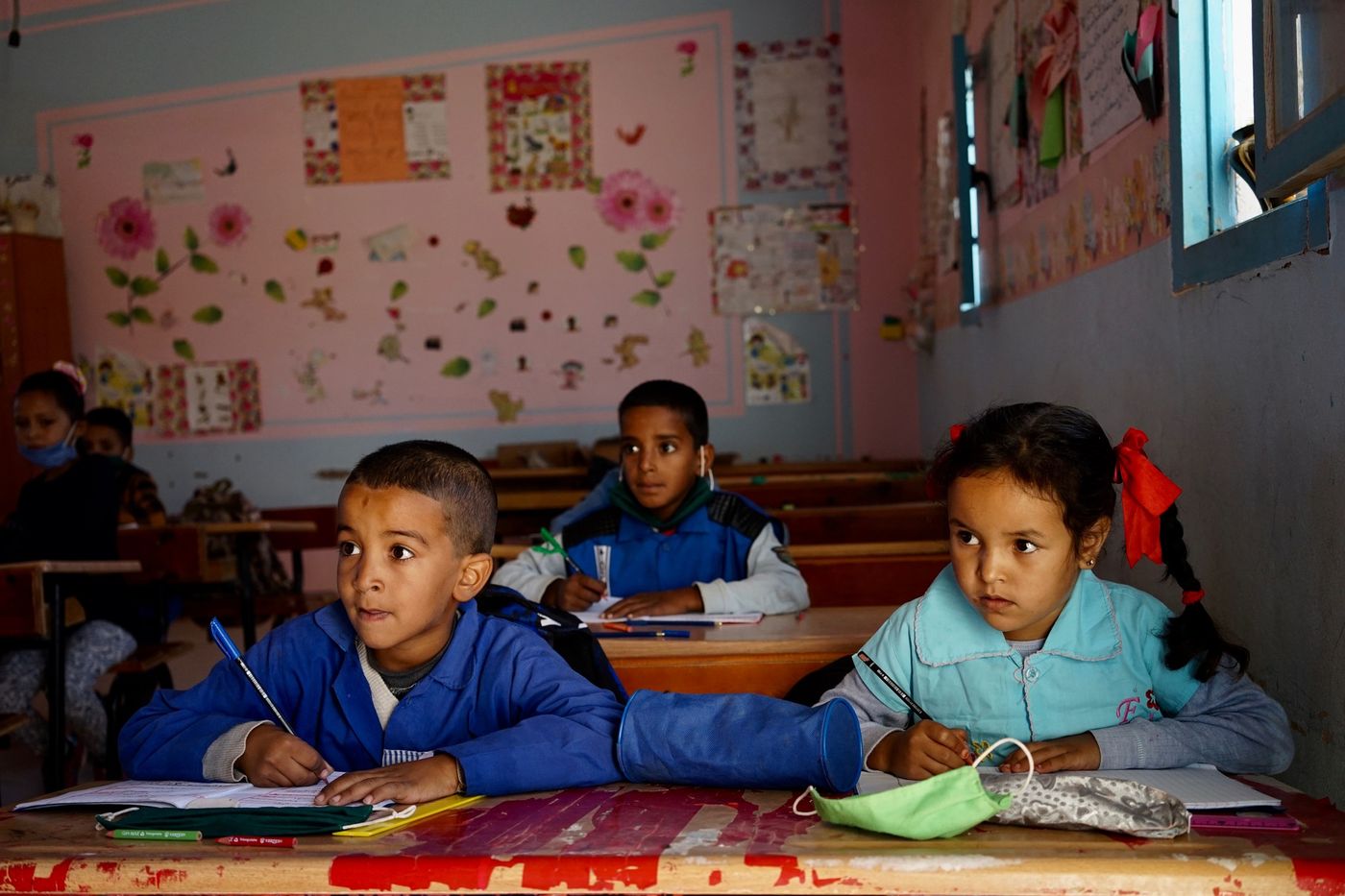 “The desert is magical for tourists, but this desert was not created to live there.” Yahia Buhubeini hurries into his office to escape the harsh rays of the sun, which this October are still hitting the large courtyard of the Saharawi Red Crescent (CRS), of which he is the director.

All around, the horizon is only sand and gravel. Not a single tree that would provide a bit of shade in this hyperarid zone, sweated by almost 50 ° C in summer and regularly whipped with sand. Yet it is there, on the borders of Algeria, 1,800 km southwest of Algiers, that the Sahrawis, these “children of the clouds”, are doomed to live as refugees in the oldest camps in Africa.

→ REPORTS. “Yet it is war”: in Western Sahara, the invisible conflict

“Living conditions are really very tough,” he insists. It’s hard not to agree, even though the temporary tent camps over the years have given way to adobe constructions, which in themselves – destroyed in the thousands during the floods of autumn 2015 – are increasingly no longer replaced by cinder block houses. The camps are encapsulated in the sand and over time, over fifteen years of war between the Polisario and the Moroccan forces, then thirty years of ceasefire and the resumption of hostilities for a year.

Algeria, host country and first aid, ended up pulling power lines to bring the power. Only the Laayoune camp is left to wait for the light. Tankers will fill – very sparingly – the houses’ large canvas water tanks. Satellite dishes were attached to the ground to withstand sandstorms. Small shops eventually opened. Libraries, repair shops for computers or cisterns, hammam offers parentheses about life in these city camps scattered on the desert plateau.

“People are there because they have an important project, namely to build a state. They are still waiting for the independence of their country, Western Sahara, it makes all the difference with most refugees on the planet”, argues Yahia Buhubeini. The Saharawi Red Crescent is the humanitarian arm of this state in exile, the Sahrawi Arab Democratic Republic – which has its government, its parliament, its local elected representatives. Both were created in the wake of the Moroccan invasion of Western Sahara in November 1975 (1).

“There is no corruption here”

“We have a very good model of governance, everything is governed by the Sahrawis. There is no corruption here.” he brags. Containers of international food aid pass through the port of Oran and arrive sealed to its warehouses before their cargo is distributed to kindergartens and schools, clinics and dispensaries and to more than three quarters of the 180,000 Sahrawis in a vulnerable situation. From the age of 12, each refugee receives a monthly basket with 17 kg of food.

Cereals, oil, sugar, potatoes, carrots … 2,200 tonnes are distributed each month by the 3,700 Sahrawi volunteers at CRS headquarters, in the coordination offices in the Dairas (municipalities) and in the 116 cities (districts) of the fields. “We have the cheapest distribution rate in the world !, exclaims Yahia Buhubeini. The refugees are there for a political cause, no one wants to stand passively. »

Also in the hospital, the Sahrawis are holding the reins. “We do not have sick people on the streets”, welcomes doctor Fadel Moctar, director of the national hospital. Despite water and power outages, the lack of equipment and medicine, the absence of certain specialists … Foreign doctors are coming to lend a hand, and Cuban teams have been switching for more than forty years. “We are facing the evacuation of the most serious cases to Algeria”, specifies Fadel Moctar, proud to have succeeded in curbing the Covid pandemic (1,700 cases and 77 deaths).

In addition to traditional pathologies, the hospital must treat mine victims, people suffering from pathologies associated with nutritional deficiencies, lack of water or its poor quality, or even stress in exile. “The resting place, the water, the food, the environment, the climate, the war, there is no good criterion for the Sahrawis”, he says without giving up.

“The cult of studies”

“The most important thing is to defend the people and the fatherland! », claims Mahmoud, an Arabic and French teacher. The tea ceremony, these precious daily meetings where we forget the abundance of adversity, also gets a political taste. To the ritual with the three teas – the first bitter as life, the second sweet as love and the third sweet as death – a fourth is often added here. “for independence”.

→ MAINTENANCE. Western Sahara: “France refrains from playing a role in resolving the conflict”

“And for that we need educated people, teachers, doctors, the teacher begs; we need books to learn, arabic and spanish in primary school, english and french in secondary school, french is essential to study at the university of algeria. “We have a cult of studies”, adds Ouadadi Cheick Ahmed El Hiba, the ambassador to Mozambique, who was able to join his family after being blocked for sixteen months by the pandemic. Not a single child walks on their own. “Everyone goes to school and college”, he congratulates himself.

And many pursue university studies in Algeria, Spain, France, Cuba, etc., turning the camps into hangouts for unemployed graduates (2). “Unfortunately, the diplomat becomes impatient, we are prevented from taking advantage of our country’s wealth, we are fed with international aid, doomed to survive and overcome the difficulties of this desert without trees or water, but we are convinced that we are leading a legitimate national liberation struggle. »

So while the men, young and old, have gone back to the front, the Dakhla camp is inaugurating a new school. “The sense of knowledge is unshakable”, defends Ahmedna, who as a 22-year-old is studying law in France. “From the age of 6, children spend the summer in Spain with host families, making them, very young, ambassadors of the cause, he explains. And those who go into exile take the case with them. »

The Saharawi camp Boujdour (south-west of Algeria), without water or trees, mixes tents, adobe houses and others in ash blocks. / Marie Verdier

“We generalized schooling from 1975 for girls and boys, men were forced to agree”, welcomes Aminetou Mohamed Deloul. The vice president of a daira in the Boujdour camp recalls the beginning when the men went to war in 1975 and the women fled: “We controlled the tents, then the women became teachers, nurses, doctors, governors. »

The camps, organized in wilayas and dairas, have for years been largely run by women. “Education, health, water, security, these are really the priorities”, says Mariem Salec, Wali from Aousserd. “Like Wali, we can be mobilized at night or during the day if there is an incident”, she clarifies, aware that Sahrawi women have attained a status and an authority incomparable to that which is not enviable for women in the countries of the region.

A population under humanitarian aid

According to the High Commission’s census for UN refugees realized at the end of 2017, 173,600 Sahrawi refugees lived in the camps, 38% of whom were under 17 years of age.

4,800 Sahrawis who lived in that part of Western Sahara under Polisario control have joined the camps since the resumption of war in November 2020.

Three quarters (77%) of the camp residents considered vulnerable and in need of food aid. The others (23%) receive support from the diaspora.