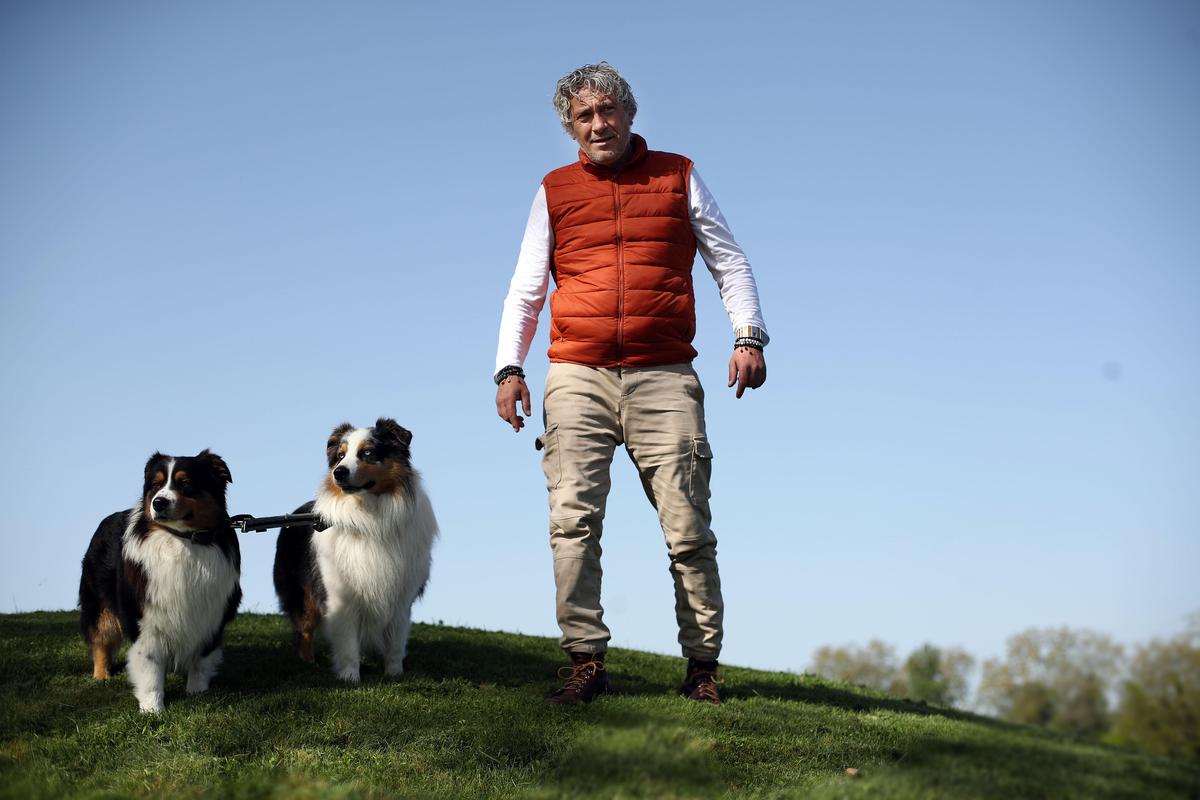 “This sharing with the dog was magical. It resonated deep inside me.”

As a young adult, he has other (pre) occupations, joins the army, leaves, works for a gym. He has flair. He feels that the safety dog ​​has the wind in its sails. He obtains his dog training capacity certificate with bite, intervenes in Saint-Gervais-d’Auvergne (Puy-de-Dôme), authorized center, is called regularly, becomes a decoy with his Bibendum costume to train the dogs.

“All this was very precise and very stereotypical,” sighs Frantz Thielen, who would like to be able to look beyond “he waggles his tail, he’s happy, he growls, he’s evil.” Then he changed his life, privately and professionally, creating his training company in first aid and fire.

Other facets of the dog

In the early 2000s, he had a crucial meeting with his mentor, who introduced him to other facets of the animal with the sheepdog. He then follows and leads courses. It’s an intimate upheaval. “This sharing with the dog was magical. It resonated deep inside me, it boiled in my gut. It’s hard to explain because it’s a paranormal relationship.”

His childhood reappears. “It is not the same form of communication, the same culture or logic. But when it comes to such a symbiosis, it’s like the clownfish and its anemone. He knows, in hindsight, that he was not ready in 2005 when he welcomed Åsse, who has since joined a group of shepherds.

He does not make the same mistakes with Nills. In 2011, this time he decided to live the relationship “to the fullest”. “It was life with a big V. I raised him as a child, with frameworks, prohibitions and, above all, time and freedom to express himself,” explains this twin father.

“He was a life companion. I was not his master, but his guide in a world that was not his in the beginning, but which he was able to adapt with incredible ease. He shared my sorrows, my fears and my joys. We had a close relationship. He has “pocket-filled anecdotes” like the one about Nills stopping to shut an old lady out of a store.

The concept of education came later. A bit random. On the terrace of a café, on the street, witnesses to this strong complicity come to urge him. “They were breathless,” describes the behavioral researcher. “They wanted to achieve the same with their dog. He said no for a long time.” I did not have the words. I knew how to feel, not explain. “Until the day he is touched by the story of a young woman and her border collie, left by her ex.” Although I did not know how to set a price, say how long it would take that I did not have a business cards, I was his only hope. »

“I asked Nills if he agreed, and it started like that,” Frantz Thielen explains. “I have them strapped. They were side by side.” Connected by a kind of 30-centimeter umbilical cord. “The principle is simple. It was my dog ​​who acted as a middleman who interfered in getting in touch with the other dog to gain his trust. It was Nills who brought the other on his heels and led his student. The young woman and her border collie are now in osmosis and even doing rhythmic obé!

“We just put him on the right track,” Frantz Thielen sums up. “I thought there might be a niche. Finally, I had my live business card. He has helped hundreds of owners since. Word of mouth worked, videos and advice were also posted on his Facebook page.