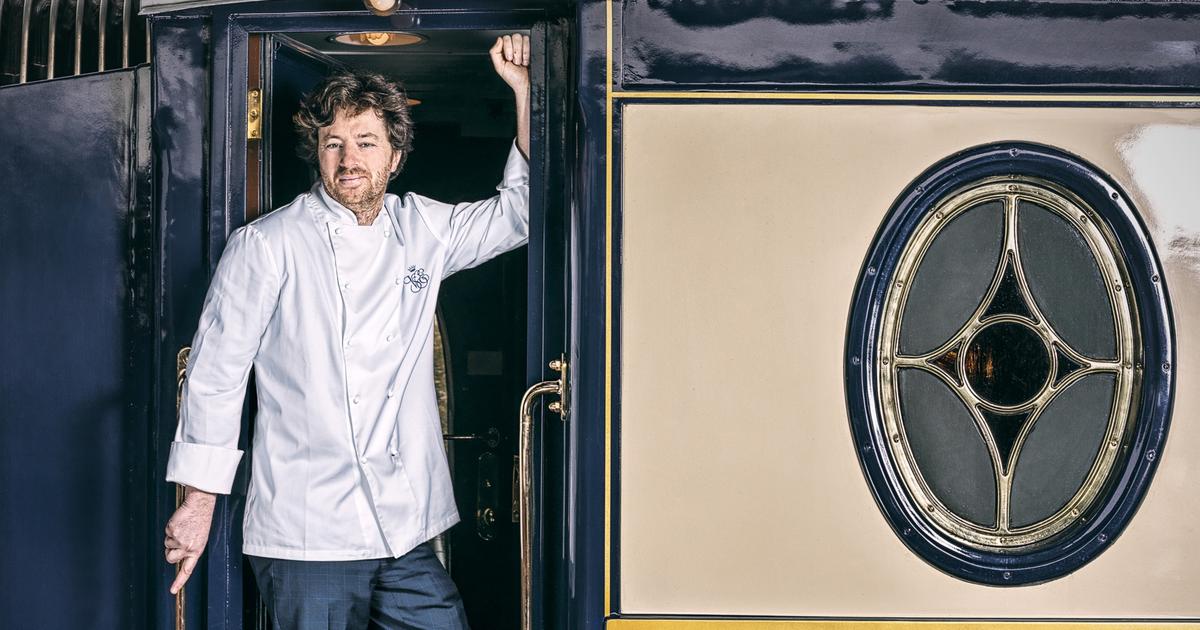 Immediately aboard the mythical luxury train. At the helm of his kitchens, Jean Imbert, the most prominent chef at the moment, invites us on an exceptional gastronomic journey. Very private tour of a train called Desire.

On the platform of the Santa Lucia station in Venice, the excitement is at its highest. Travelers are making a dream come true: Embark on the mythical Venice-Simplon-Orient-Express, en route to Paris. Whether they are admirers of Agatha Christie or lovers of new experiences, it is towards a new passenger, just as impatient, that their eyes are turned. His name: Jean Imbert. At the age of 40, the French chef takes over the kitchens of the famous train. Freshly decorated with a Michelin star for his table at Plaza Athénée, the man who already works in the Monsieur Dior restaurant in Paris has found a special taste in this new adventure, for here he fulfills a childhood dream.

The story is like in a fairy tale. In 2012, Jean Imbert, a candidate for top chef, reached the finals of the game show and boarded the Venice-Simplon-Orient-Express to revisit a menu served on board, under the watchful eye of Christian Bodiguel, the master of the place. thirty years. A friendship was born between the two chefs. Over time, the big winner of the show has made a name for himself in the restaurant industry, but the fantasy of serving his dishes on the famous train has never left him.

After learning that the place was vacant, the leader, stubborn and thirsty for unique adventures, sent a letter to LVMH (group owner of the Belmond group, even owner of the train), in which he expressed his desire to take control of the kitchens of Venice -Simplon-Orient-Expressen. He does not know today whether his letter has been read, but work, fate and coincidences have brought it to its destination.

As soon as you step into the dining car, the magic happens. Chic attire is a must (sneakers and jeans are banned on board the train) for the happy passengers who enter a world as historic as it is cinematic. Belle Époque panels, mahogany marquetry, velvet curtains … The train’s eighteen carriages, signed by designer René Prou ​​and glass artist René Lalique and dated to the oldest from 1926, housed six new Grand Suites, produced exclusively in Clermont-Ferrand workshops.

“The weight of the story lies in every detail of this train, and I wanted to add my stamp by rethinking the visual identity of the three vintage cars,” reveals Jean Imbert. “Thus, we changed the carpet and also some light and marquetry, we designed new porcelain service, and a new bar is planned for next winter. These changes make me in a way part of the myth and there is a little magic side that also puts pressure.

If the chef imagined part of the decoration and the art of the table, he naturally also redesigned the menus: “The train involves many limitations in the kitchen (shocks, drafts, complicated supplies …), which I find interesting because it encourages creativity and reflection. It requires organization and requires getting out of your comfort zone.

For this new chapter, he wanted to preserve a real kitchen and created simple, delicious dishes, made with exceptional products. Mussel bass (pan-fried a la minute), poultry supreme, lobster, fried turbot … directly from the three kitchens equipped with all the necessary equipment to serve 120 passengers at the same time. “Twelve chefs work on board the train, it’s the equivalent of a brigade in a large Parisian restaurant, and if certain things are organized upstream, we remain, on board, chefs.”

On the menu (unless contraindicated, identical for all customers): one starter, two dishes of your choice at noon and two dishes of your choice in the evening, cheese and dessert. breakfast not included,afternoon tea and tapas from the bar. Knowing that the train is running between the end of March and the beginning of November, Jean Imbert plans to change the menu completely at least three times to follow the seasonality of the products.

His next challenges? Achieving a perfect soufflé for dessert (variations in train speed cause oven temperatures to fluctuate and the shocks prevent the soufflé from rising normally), and sublimates his reinterpretation of Wellington-style beef. While waiting for success with these various culinary challenges, the chef, who has just arrived at the Gare de l’Est in Paris, is rushing back to his other establishments and is already suggesting that new projects are coming.