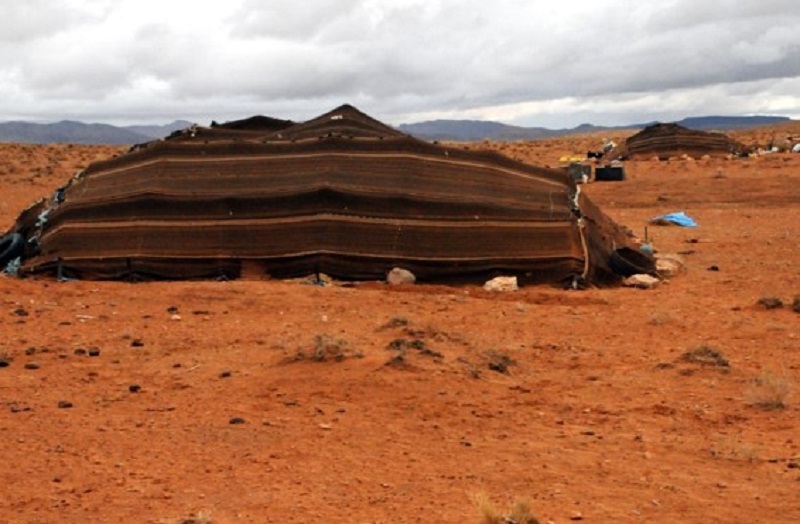 Nomadism is about feeling at home where you are in the world. This is even the basic principle. From the prehistory of hunter-gatherers to the present day, nomadism has evolved and adapted voluntarily. So if today we remain thoughtful about this particular lifestyle, we are nonetheless descendants of these travelers. Mankind’s history consists of shifts, journeys. Today’s nomads – and they are becoming more and more rare – continue in their own way to perpetuate this tradition. 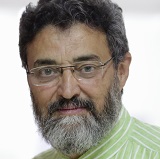 In Morocco, the Oriental region has long been a formidable terrain for nomads. Mohammad Mahdi, professor of rural sociology at the National School of Agriculture in Meknes, explains why. “It’s a territory steppe consists of soil trip, that is, land to call pastoral. The surface area of ​​the oriental pastures is estimated at about five million hectares. These routes stretch from north to south and allow breeders to nomadize between winter routes, Dahra in the north, and summer routes, Sahra in the south. “Our conversation partner is the author of the reference book Nomadic Culture and Heritage: Bni Guil in Eastern Moroccopublished in 2018 by Cardère editions.

Life under the stars … and the tent

The sociologist teaches us that the culture and heritage of the nomads of eastern Morocco is part of a universe of pastoralists (breeders) found in many regions of the world. “But they have cultural peculiarities which brings them closer to the Sahara nomads in southern Morocco and Baydanes in Mauritania, ”he says. These common features have the French anthropologist and ethnologist Pierre Bonte, author of the book The last nomads published by the Solar Edition in 2004, called “Culture of Badiya »Bring together the values ​​associated with animal husbandry, nomadism and tent life.

Nomadism is therefore a form of pastoral production based on extensive and field-dependent livestock farming and a lifestyle defined by life in tents, mobility – tarhal in Arabic – and a tribal organization. According to Pierre Bonte, it rests on “material foundations and other intangible foundations of a cognitive and symbolic order”.

“The abode of the eastern nomads is the steppe, Sahbwhich refers to the Arabic word Badiyaeven attached to it by badw, Bedouin. It is therefore a nomadic Bedouin culture and heritage. Oriental nomads say to themselves A’rabArabs or Aroubiaor the inhabitants of Laa’roubia Says Mohamed Mahdi.

The way of life of the nomads of the Orientals is backed by a tribal organization, where the tribe consists of ethnic groups: factions, douars, genera. The pastoral activity of the tribe is organized around the ‘nomadic camp’. that douar Where Farqa constitutes the basic traditional unit of movement and organization of nomadic life. Each nomadic camp consists of a central core, represented by a large and powerful tent, Khaima Kbiraand satellite tents consisting of the families of the big tent, its customers and servants, ”explains our interlocutor.

The geography of the nomads, contrary to what one might think, is not arbitrarily invested. Travels and movements are never random. The two notions of time and space are mastered. In more scientific terms, Mohamed Mahdi develops this travel philosophy: “The pastoral territory is subdivided into Wolf priests. that Wolfliterally ‘usual place’, which is an area of ​​movement for an ethnic group, where its summer courses are located, Woulf Arbia’aand winter, Woulf Ach’ta, its cultivated areas, its water resources. customary, Orfcontrols the use of Wolf. Finally, the technical management of herds is based on mobility (or travel), that is, nomadism or horizontal transhumance between winter (Dahra) and summer (Sahra) routes. »

But it sometimes happens that this mode of operation changes due to climatic and weather conditions. For the nomads in Bni Guil, for example – an Arab tribe that arrived in the Orientals in Xand century, in the time of the Fatimids -, and in case of necessity or severe drought called Jdoub, they nomadize outside their territory. Pastoral covenants established in the past thus allowed the exchange of usufruct rights to the mountain areas between nomads of different tribes.

Is there a connection between this tribe and the famous sheep breed ‘Bni Guil’? This is confirmed by Mohamed Mahdi. “The name of the sheep breed comes from the Bni Guil tribe. Breeders call it Daghma Where Hamra, referring to its brown color. Nomadic poets sing about its qualities and its beauty. The mention ‘Protected geographical indication Bni Guil lamb’ was recognized for this breed in 2011.

In addition to the nomadic lifestyle that continues in certain regions, according to another modus operandi, the heritage and cultural value that these travelers have bequeathed to us is indisputable. In his book on this legacy, the rural sociologist writes it ” the nomads have shaped a fascinating culturecontributing to the richness and diversity of Moroccan tangible and intangible cultural heritage and for the same reason to the greatness of the heritage of mankind ».

The material basis of the Bni Guil community is, according to the specialist, represented by the pastoral breeding of sheep, goats, camels; products derived from this breeding (wool, hair, meat, milk, butter); their transformation through culinary arts and crafts, into habitats, tents, various foods and canned foods, furniture, clothing and kitchen utensils. This is the “material culture of the nomads”.

From material to symbolic

As for the intangible culture of the nomads, “the cognitive and symbolic basis is represented on the one hand by all the knowledge and know-how that is consistent with the lifestyle of the steppe and its limitations, such as breeding techniques, knowledge of fauna and flora, climate and meteorology, traditional medicine and pharmacopoeia. And on the other side of the norms that govern social life and social relations, oral traditions, customs, language, ritual and artistic activities such as music and dance and the art of the table “, describes the professor of rural sociology at bl. The Meknes National Agricultural School, he believes that in order to preserve and transfer this culture, it is necessary to continue the legacy of certain nomadic cultural elements.

A legacy that is not without risk. The anthropologist Pierre Bonte, who has studied nomadic societies for more than thirty years, evokes in his work a folklorization of their way of life and their culture, which is only one of the consequences of their marginalization. The nomads, according to him, “however, resist their programmed disappearance by reaffirming their cultural value and their rejection of the standardization brought about by globalization”.

Because, it must be said, the lifestyle of the nomads has undergone many changes, especially under the impact of recurring droughts and climate change. This resulted in sedentarization or the abandonment of nomadism. Sociologist Mohamed Mahdi describes this mutation to us. “This sedentary interior took several forms: to settle in a tent or in a shelter on the route, to live in a permanent house in a city center or in a tent or in a temporary shelter on the outskirts. The breeder therefore retires to a city center or its outskirts to carry out ‘urban breeding’ there combined with other activities, such as daily work for example. “

The second change that the expert mentions is the motorization of nomadism through the use of a truck to move the family and the animals, or towed tanks to fetch water. Since now, the water comes to the flock and not the other way around, as was the case before.

Modern era nomads use technology. It is, for example, about “the use of the mobile phone to prospect the routes or the situation in the cattle market and communicate with the shepherds or members of the family”, illustrates Mohamed Mahdi. The sociologist also evokes, as the main change in the way of life of this traveling people, the abandonment of the breeding activity. It was about several nomads who lost their capital (livestock). This is a pure and simple abandonment of pastoral activity for a conversion to other professions.

The second phenomenon that also affects nomads – this has also been the case for sedentary people in recent decades – is internal and international migration, which has developed a lot. This is “the internal migration of shepherds to the whole of the Oriental region, from Jerada to Berkane and from Oujda to Guercif, and cities outside the Oriental region.

However, there is one peculiarity: the emigrant does not disconnect from his place of origin. A large number of these emigrants go back and forth between Spain and their place of residence and do not give up agriculture, which is left under the supervision of other family members, ”says our interlocutor.

How does the Eastern Bni Guil live today, and what is their relationship to the so-called modern society? Mohamed Mahdi’s response is unfortunate: “Today’s nomads live very poorly and handle their precariousness. It follows a decline in pastoral agriculture. The sociologist explains to us that in fact young people and women turn away from nomadism, who strive for a life different from that of their ancestors, considered painful and unprofitable. “Currently, many people continue to maintain this lifestyle for lack of an alternative. They live under constant threat of drought and rising feed prices. They live isolated from their journey (called Lakhla), while being connected to modern society by telephone, means of transport and, above all, by the market. »

The break with past practices is now clear : the nomad buys pretty much everything on the market for food, clothes and even for accommodation. “The times when women weaved wool to produce flij necessary for the manufacture of tents, fabrics for clothes, other blankets and rugs, is over, ”emphasizes the professor of rural sociology. These old woven tents have provided space for the canvas tent, which is more practical and easy to transport. Clothes, blankets and rugs are also purchased in the souk. ‘And it is also in the market that the nomad sells his animal products. In the event of a shortage of grass, the nomad is forced to buy animal feed, which makes him very dependent on the national and international grain market, on intermediaries’ speculation and on fluctuations in the prices of international stock exchanges, ”explains Mohammad. Mahdi.

Are we witnessing the programmed end of nomadism or at least what is left of it? Nothing is less certain.

The Last Nomads, Pierre Bonte, published in 2004 by Solar editions