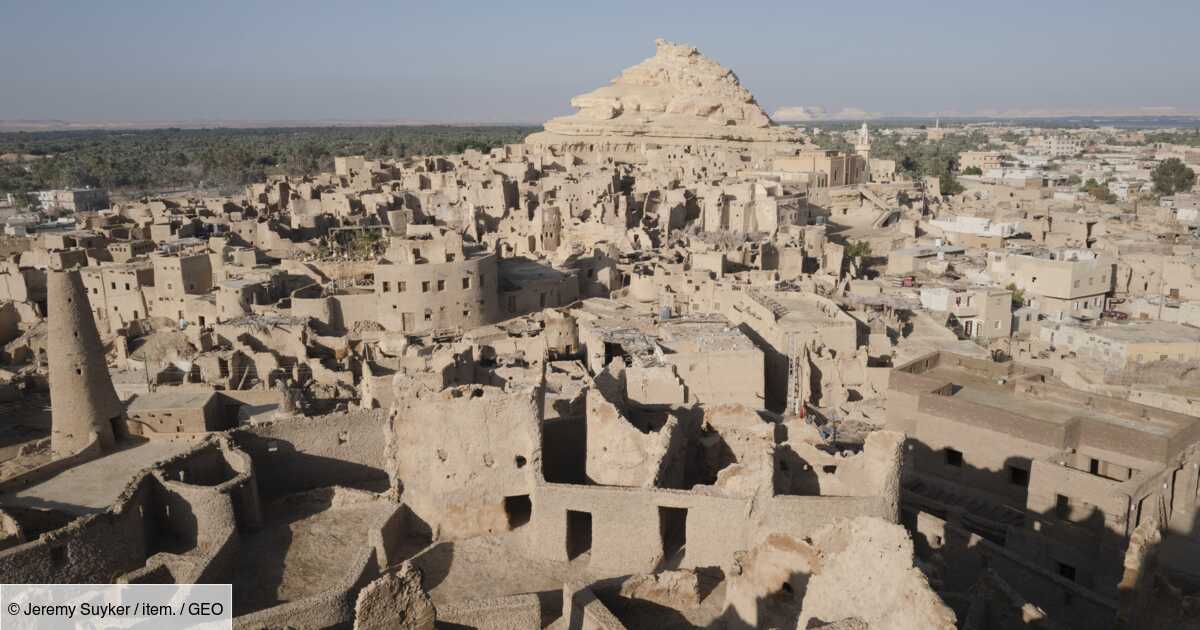 GEO: Siwa was an important religious center in ancient Egypt and Greco-Roman antiquity. What are the most interesting leftovers?

Sergio Volpi: The oasis has been continuously inhabited from the Paleolithic era until today. But the oldest element found is the temple of Amun, known as the “oracle”, built by the Amazigh king Soutékhirdis in the 6th century BC. Hieroglyphs are still visible there, but the building is in poor condition as it was used for a long time as a shelter where fires were made until it was rediscovered in the 19th century.

Below is the Oum Oubeyda Temple, which dates from around 350 BC, of ​​which only one wall remains with inscriptions, but which was in good condition until the early 1800s, when French explorers came to Siwa. Thanks to their drawings, we know it was dedicated to funeral rites, like those on the west coast of Luxor. King Ounamon was buried there and his sarcophagus is the only one that has been found here. Finally, the mountains around Siwa were almost all used as necropolises. The most important is housed in the “mountain of the dead”, gebel Al-Mawta, with its thousands of tombs covered by paintings from the 6th century BC. to Roman times.

The name of Alexander the Great is associated with this region, why?

In the time of Alexander the Great, the oracle Siwa had been revered for three centuries by the Greeks. In the Sahara there are thousands of oases, but Greek poets and scientists only mentioned this one. As soon as he landed in Egypt in 333 BC, Alexander the Great went to Siwa to have himself declared the son of the god Amon and establish his power. Ceremonies were held with eighty priests, but only Alexander was allowed to enter the temple. According to historian Callisthenes, who accompanied the sovereign during his military campaigns, the oracle assured him that he would always win. Alexander is the best known, but all the Greek kings consulted this fortune teller at that time and during the Second Punic War (3rd century BC) the Carthaginian general Hannibal Barca sent him a messenger to find out if he would defeat the Romans. We find the oracle as far away as Rome, the temple of Christianity, on the frescoes of the Sistine Chapel. We see Delphi’s sibyl (“oracle” in Latin) and the “Libyan sibyl”, Siwa.

What remains to be discovered in the oasis?

We still have not identified the tombs of the rulers of Siwa who ruled between 3500 and 350 BC. The excavations carried out on the cliff Aghourmi, where the temple of the Oracle stands, yielded nothing. This period remains quite mysterious. North of Lake Zeitoun in al-Salam is a team digging a large temple, built in Greek times and expanded in Roman times, which is full of pottery. It is one of the most interesting discoveries since the 1950s.

To go further: our podcast “Return to the Field”

To escape the second incarceration in the fall of 2020, our photojournalist Jeremy Suyker, from the commodity collective, found the solution: he spent a week in this stunning oasis, in the middle of the Sahara, and discovered its unique treasures and its inhabitants. . He delivers to the microphone in the GEO podcast “Return to the field”, to listen to below and on all platforms.

➤ “Siwa, the oasis that defies the climate”a report by Ariane Lavrilleux (text) and Jeremy Suyker (photos) published in GEO magazine from May 2021 (n ° 507, Basque Country).

📸 In pictures: Siwa, the Egyptian oasis that is emerging.

➤ To view all GEO numbers available individually, it is here ! Are you already loyal to GEO content? So as not to miss anything, discover our subscription plans to receive GEO every month in your home with ease.

Robert Solé: “In Egypt, archaeological resources are inexhaustible”
Egypt: Zoom on a 5,000-year-old road sign, the oldest known directional “sign”
⋙ In Egypt, the renovated citadel of Shali dreams of an “ecotourism oasis”