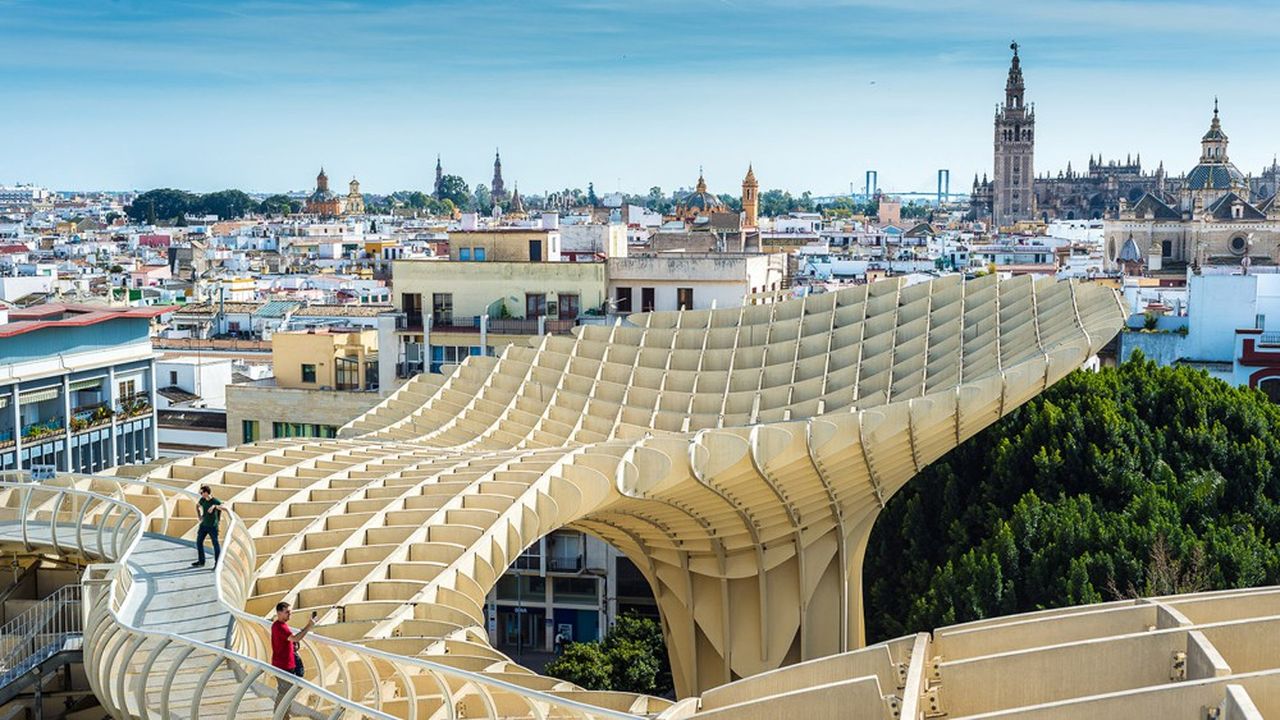 This spring, head to Seville to discover hotels, restaurants and shops that embody the renewal of the city.

Opened in 2019 in the heart of the old town, this four-star establishment revisits the city’s signature elements with chic and modernity. Graphic tiles on the walls, dark wooden floors with floral rugs and a reception showing the service and silverware that have made Seville’s artisans a success.

The welcome is cozy, even in the breakfast room with its Andalusian bistro atmosphere, which overlooks the charming terrace with trees and a pond. Solid breakfast with small churros to dip in chocolate.

It is a building that was inaugurated in 2011, whose aesthetics aroused great debate among the inhabitants. Originally called the Metropol Parasol, then renamed Las Setas de Sevilla (Seville’s Mushrooms), this structure designed by German architect Jürgen Mayer is considered the largest wooden building in the world, consisting of 3,500 rooms. Two ways to discover it: Sit under the structure, on a bench in the welcome shade, and watch the children play, or climb 29 meters to access the winding walkway that crosses the building’s roof. From above, the 360 ​​° view of the city is complemented by an immersive video and an app that lets you discover the panorama in augmented reality. For those who prefer ancient stones, the basement houses the antiquarian, the remains of houses from the Roman colony.

On the other side of the Guadalquivir River, the Triana district has long been home to sailors, workers and also potters. Very close to the traditional clay workshops that still exist today, is a museum dedicated to this history. The establishment opened in 2014 and is housed in a former factory, whose period ovens have been preserved. A modern metal structure was built on the remains of the 19th-century building. This extension, signed by the AF6 agency by Angel Gonzalez Aguilar, is decorated with terracotta circles that protect from the sun, constantly in dialogue with the period stone. Inside, the visitor discovers the traditional process of ceramics, but also the various styles that characterized the medieval, renaissance and baroque periods up to the industrialization of the 19th century.

Like everywhere else, the Covid epidemic has changed the city’s restaurant map. Fans of the industrial style knew Casaplata and its architecture, which broke with the codes of traditional tapas bars. Designed by the Lucas y Hernàndez-Gil studio, the decor mixes raw concrete, sets of mirrors and soft velvet. The new owner, Spanish chef Oscar Gonzalez, took over the place without touching the decor. He offers his menu of Spanish specialties, which he pushes with his native Basque influences: an airy hummus with beef, a bite of salmon in a transparent piece of radish or even “the egg in its golden nest”, which is bursting and mixed with liver cream and mushrooms. Great inside and out.

The place was a monastery in the early 15th century, then a barracks, a ceramics factory and finally a place of contemporary art with a qualitative program, and whose architecture has preserved the traces of this rich history. Especially the monks’ kitchen garden, which now houses installations and large ceramic stoves. Until 15 May, for example, the old chapel houses works by several textile artists, works by Sheila Hicks, Ulla Von Brandenburg and Paola Besana are thus in dialogue with the time-typical ceilings. Further on, the exhibition “Escultura Expandida” presents until May 15 some pieces from the rich permanent collection, including the French star Louise Bourgeois, the Sevillian Julia Llerena or the Russian collective Chto Delat.

Pilar Gavira has mastered the Sevillian ceramic tradition with great talent. For five years she has designed everything in her studio in the city and had it made by local craftsmen. Opened last year, his charming shop exhibits his graphic ceramics that renew traditional patterns. At the same time, it offers a few antique services from Triana and Granada. Without forgetting the unforgettable orange blossom water by Luca de Tena, produced in Seville since the 19th century.

Situated on the banks of the Guadalquivir River, at the foot of the Triana Bridge, the oldest in town, the old fish market has been renovated, highlighting the quantities designed by its founder: Gustave Eiffel. Now called Mercado Lonja del Barranco, the 1,200 m2 space now houses kiosks with eclectic specialties (tortillas, ham boards, paellas, oysters, pizzas, sushi, etc.). But the place is especially worth the trip for a drink at the end of the day. Cañas and Rioja wines are sipped on the tables on the outdoor terrace overlooking the opposite shore where the Triana district is located.

Transavia offers up to two direct flights a day connecting Paris with Seville, even out of season. From € 34 one way. www.transavia.fr.