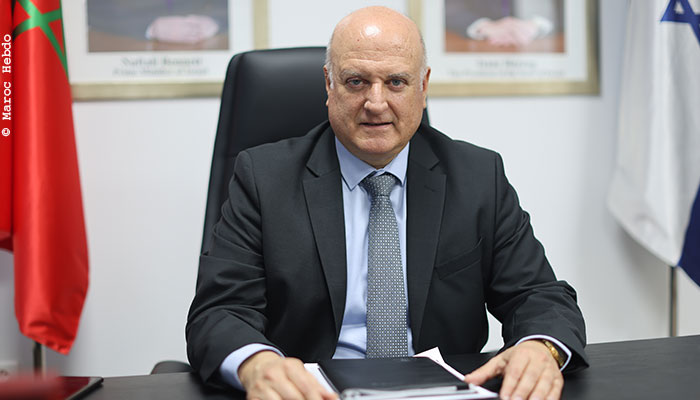 Moroccan Sahara, security agreement, Algeria, economic and human relations. David Govrin, who has been installed for a year now in Rabat, has, to say the least, many things to comment on, and those who follow his pages on social networks know that he never holds back anyway. But paradoxically, the word from the official representative of the State of Israel in Morocco rarely remains in the press.

That was at least the case until this interview, which was given exclusively to Morocco Hebdo, and where he agreed to speak straightforwardly in an open and rude language, as is rarely the case for such a diplomat.

Mr. Govrin, at first we do not know what to call you. Sir. Charge d’Affaires or Mr. Ambassador? As you know, there is a certain vagueness …
I arrived in Morocco in January 2021 to take up the post of Head of the Liaison Office in Rabat, which was reopened after the resumption, a month earlier, of diplomatic relations between the two countries.

And in August of the same year, the foreign ministers of the two countries agreed to raise the diplomatic representation to the level of the embassies. Two months later, I was officially appointed Ambassador of Tel Aviv within the framework of that agreement. I was to present the figured copies of my credentials to Mr Bourita in the coming weeks, and the original versions to the King thereafter. We remain patient and calm about this.

You just finished, January 11, 2022, your first year in Rabat. How do you rate it? And we could also ask you the same question about the re-establishment of diplomatic relations between Morocco and Israel …
It is a success on several levels. The two countries have signed about twenty conventions and memoranda of understanding in several areas such as economics, security, education and tourism. And to ensure implementation, the two parties have set up five working groups. At the moment, I believe that the launch of direct flights between the two countries for the first time in history is the most important step forward, not only for tourism but also to give the two peoples the opportunity to get to know each other and bring yet more. closer to .

You have already been an ambassador before in another Arab country, in this case Egypt. Did you feel any difference compared to Morocco?
The welcome in Morocco is warm. Life here is different because civil society has a greater weight and role in political and social life, which helps to develop relations between Moroccans and Israelis on a human level.

On the street, people are more open, they greet me, and sometimes they ask to take selfies with me. And then I love the Moroccan cuisine, which I find unique. The chicken lozenge is my favorite dish. I love talking to people, they are very open and warm. I love my life in Rabat, it is a quiet, refined, beautiful and very green city, but I love to travel everywhere in Morocco, especially as the country offers very varied landscapes and experiences because each city has its peculiarities.

And then I really appreciate the beaches here. Israeli tourists are eager to discover all this. I urge them to come as soon as the epidemiological situation allows. We expect tens of thousands of Israeli tourists to Morocco. I attended the Hiloula in Oulad Berhil, near Taroudant, a few days ago, but I think Morocco can attract tourists of all categories, and not just religious tourists or tourists of Moroccan origin.

Let us go back to the conventions and memoranda that you mentioned earlier, and let us first of all focus on the Security Cooperation Agreement signed on 24 November 2021 in Rabat, because it is the one that has undoubtedly attracted the most comments in the Moroccan and Israeli media but also other countries. Interestingly, Israeli Defense Minister Benny Gantz called it “unprecedented.” How is it really?
If we look closely at the relationship between Israel on the one hand and Egypt and Jordan on the other, we quickly understand why the security agreement concluded with Morocco is unprecedented. We do not have a similar agreement on the same level with the two aforementioned countries, although official relations and the peace agreements between us go back several decades. I emphasize that the signing of this agreement is the result of a very strong will, both from the Israeli and Moroccan sides.

You know that Algeria had little taste for the signing of the agreement, and its president, Abdelmadjid Tebboune, made its cancellation an absolute condition for any resumption of diplomatic relations with Morocco, interrupted by his country on 24 August 2021. What do you think?
I would like to make sure that the agreement in question is not directed at any country. It is simply the result of common needs and challenges for Morocco and Israel. Among these challenges are the threat posed by Iran and its allies in the region as well as terrorist organizations.

Rabat and Tel Aviv support the stability and development of the region and work in this direction. Both countries have understood that tackling these challenges hand in hand will yield better results. Security cooperation makes the fight against these threats more effective. Unfortunately, the rapprochement between Algeria and Iran is damaging the stability of the region. Tehran is trying to expand its influence in Africa, including Algeria, which it is trying to infiltrate. And then I think the Algerian power, by attacking Morocco in relation to its rapprochement with Israel, is trying to divert the attention of its people from the country’s crisis, especially the economic one, by using the foreign threat card.

In addition to Algeria, part of the Moroccan population had also opposed the agreement internally, and there are still many Moroccans who reject normalization as a whole. What inspires you as an Israeli diplomat?
I believe that anti-normalizers must understand that the resumption of relations between Morocco and Israel will ultimately benefit both parties and will strengthen the stability of the region. In any case, the resumption of relations will not be at the expense of the Palestinian cause, and we reiterate our call on the Palestinians to enter into a process of direct negotiations without preconditions. And there, each party will be able to put its demands and demands on the table. In this sense, we pay tribute to Morocco’s role, which encourages the two parties to resume negotiations, as they did in the 1980s and 1990s, or even in the late 1970s, to facilitate contact between Egypt and Israel.

Has normalization become quite welcome in Israel?
The Israelis are happy about the resumption of relations, especially in light of the historical and cultural ties between the two peoples. Morocco is a friendly and allied country and I assure you that very many Israelis want to visit it.

On the other hand, three weeks ago in Rabat, we opened an office outsourcing office that handles the processing of visa applications to travel to Israel. This office provides Moroccans who wish to visit Israel with all necessary information. Officially, the applicant must allow forty-five days to obtain his visa, but in practice it often takes less time.

I have one last question to ask you about the Moroccan Sahara, which, as you know, is close to our hearts in Morocco and constitutes our first national cause. So far, twenty-five countries, including the United States, have recognized the Kingdom’s sovereignty over the region. Is there a chance that Israel will be the twenty – sixth on the list?
We are aware of the importance of the Sahara issue for Morocco. For now, we are focused on developing bilateral relations. The question of recognizing Morocco’s sovereignty over the Sahara will depend on an agreement between the heads of diplomacy in the two countries, and I seriously believe that this is a possible scenario.