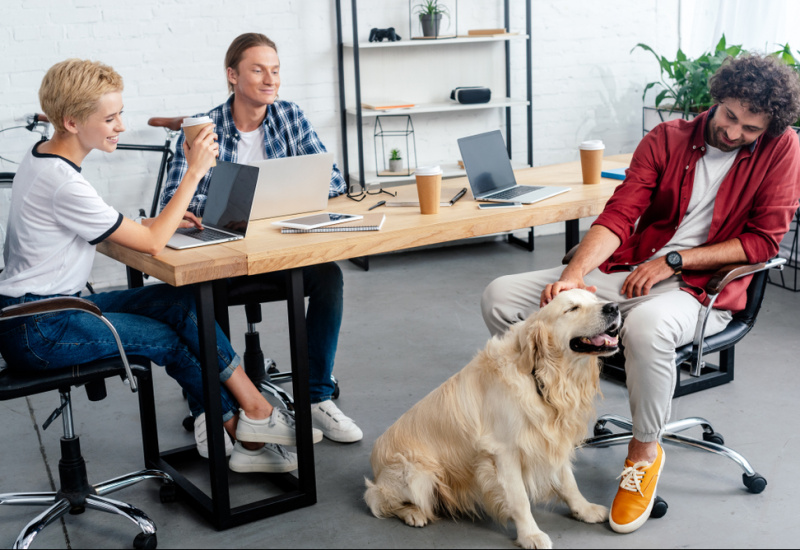 According to a study, every second Canadian supports the idea of ​​taking their dog to work. Report from a design company in Ottawa where animals are now part of the team.

Daisy stands on all fours and wags her tail when visitors arrive, taking care of the team’s well-being at Tungsten Collaborative. The dog, like many other pets, has the right to come to the office with his master, who worked from home during the pandemic.

The 12-year-old blonde-haired labrador sniffs for work after something to eat or play with. By his side, Delilah approaches – a basset hound with long drooping ears – and looks like he wants some attention too.

Daisy is an “integral part” of the company. On the company’s website, she poses among team members and is even entitled to a short biography. “Many of Daves’ (McMullin, vice president of design, editor’s note) biggest innovations have arisen on long walks with Daisy,” the company writes, adding that the dog has “nine years of experience supporting the best designers.”

“We encourage people who have pets to bring them” to the office, Tungsten Collaborative President Bill Dicke told AFP. “You develop this relationship with your pet at home, and suddenly you go back to work and they have to checkout for the day or walk around the house alone,” laments the 47-year-old driver, who feels “is not fair” for the animal.

According to a recent Léger survey conducted for PetSafe, every second Canadian (51%) supports the idea of ​​taking their dog to the office. This proposal is especially appreciated by the youngest: 18% of employees aged 18 to 24 say they would change company if their employer denied them this option.

For some employees like Johan Van Hulle, 29, the new rule was “a key factor in (his) decision” to accept a job at Tungsten last year. “Allowing dogs is a good indicator” of a corporate culture, the owner of Eevee told AFP, looking for an environment that “was not too corporate”.

Also in Ottawa, this time within the construction joint venture Chandos Bird, the designers of a nuclear research laboratory are visibly excited about the presence of Samson, a 10-year-old blonde Yorkshire terrier. His master, Trevor Watt, did not want to leave him alone in his new home when he returned to the office in January.

Bringing him in should be a temporary solution. Not only did he adapt to office life, but he also won over his master’s colleagues, who now share walks with Samson. “He loves getting to work,” says Trevor Watt, who appreciates “not having to worry about him.”

Her boss, Byron Williams, says cuddling a dog is a great way to “decompress after a big meeting.”

A presence that is not always appreciated by everyone

However, the presence of man’s best friend at work can present certain challenges, for example for employees who are allergic to animals or those who are afraid of them. Samson stays on a leash when Trevor Watt’s colleague, scared of dogs, is nearby.

Some employees of other companies, interviewed by AFP, also complained about stains on the carpet, improvised barking and hair found everywhere.