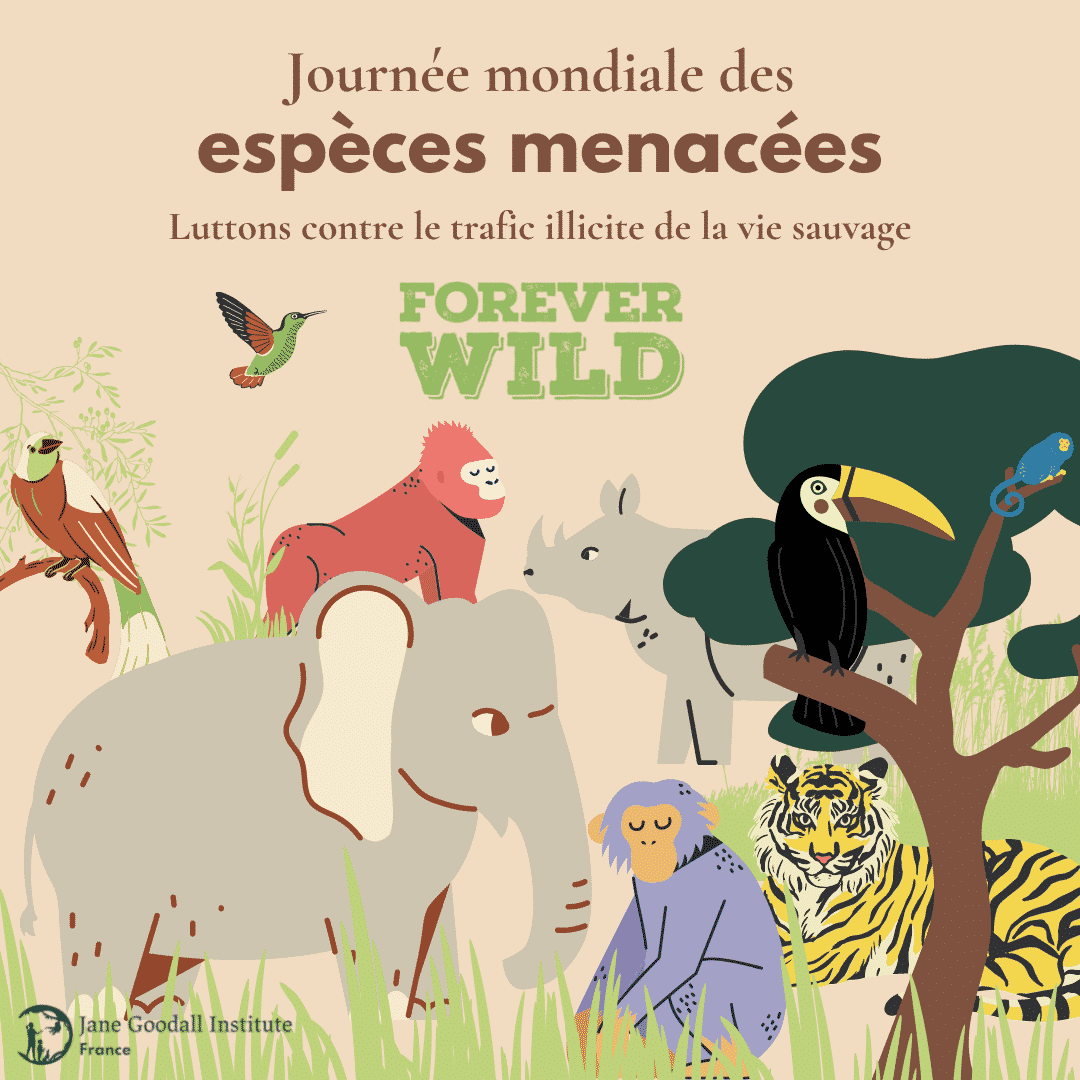 May 11 is World Endangered Species Day. In this forum, Galitt Kenan, Director of the Jane Goodall Institute France, recalls the need to fight effectively against wildlife trade. This threat is still poorly known by the public. It is not only limited to poaching and feeds a highly organized crime that gets colossal revenue from it to the detriment of the living.

Animal and plant species are disappearing all over the world at an awful rate.

So much so that it is now accepted that we are currently living in 6th mass extinction of biodiversity. In the past, life on Earth has already almost disappeared 5 times, sometimes due to an intense ice age, sometimes due to a meteorite that wiped the famous dinosaurs off the map. The big difference is that this time the phenomenon is happening in record time, and it is solely our fault.

Due to climate change associated with human activity, due to the destruction of the natural environments that we use so much for agriculture, due to overfishing and pollution of all kinds, we have in less than 50 years lost more than 60 % of wildlife populations. And on the famous red list of the UICN (International Union for the Conservation of Nature), which shows all species threatened with extinction, we now find 41% of amphibians, 37% of sharks and rays, 26% of mammals and 13 % of birds worldwide. It should be noted in passing that France is one of the 10 countries that houses the largest number of endangered species …

In addition to all these threats mentioned about wildlife, there is the illegal trade in wild animals (often endangered), which continues to grow. It now ranks fourth among the most lucrative transnational trade in the world and represents about 20 billion euros a year with an annual growth rate of 5 to 7%, according to Interpol, right after drug trafficking, counterfeiting and human beings.

Yet the legal trade in protected species exists. It is regulated by CITES, the Convention on International Trade in Endangered Species of Wild Fauna and Flora. This may come as a surprise, but this intergovernmental agreement issues quotas every year for the collection of certain protected species for the supply of e.g. the leather and food sector, but also medicine. By thus providing a market value for endangered species, CITES regulates trade in these species and suspends it if necessary to ensure the renewal of stocks and thus their survival.

Despite this, the illegal trade in wildlife continues to grow and contributes to the gradual erosion of biodiversity. Legally, this traffic refers to any environmental crime involving “consumption, trade (supply, sale or trade), import, export, processing, possession, acquisition and consumption of wild animals and plants {…} in violation of national or international law. But the low probability of being arrested and convicted in countries that lack the means to do so, and the significant profits generated by the traffic, only encourage traffickers who work as real mafia for organized crime. the villainous colonial sniper with his old rifle has long since given way to paramilitary groups organized into veritable militias chasing rhinos with automatic rifles from the top of a helicopter.

Trade in endangered species has grown to an industrial scale and affects all countries in the world.

Lion cubs and cheetahs are being torn from their groups on the African savannah to be carried around on a leash by influencers in Dubai. Exotic birds are trapped in South American forests and will die of suffocation in the small tubes that will transport them to western black markets they will never see. Crocodiles or young snakes pass customs in small boxes before becoming too large for the apartment of their dishonest or uninformed buyers, who let them out into the wild when they are not in the pipes.

Very few of these individuals survive the journey organized by the traffickers: it is estimated that only one in 10 reaches the end of the journey. But the profit is such for the traffickers that the game is worth the light.

Moreover, the illicit trade in wild animals does not only concern living individuals: products derived from wild animals also circulate illegally throughout the world. France is particularly concerned as a destination and transit country for many international flights originating in French-speaking Africa. In 2021, for the Roissy Charles de Gaulle T2 terminal alone, 36 tonnes of illegal wildlife products, including 17 tonnes of animal species, were seized.

Majestic elephants die in flocks, so their ivory ends up as small decorative statuettes on a shelf of smuggled exotic wood. Tiger bones are crushed, and rhinoceros horns, the price of which manages to exceed the price of gold, are tapped to serve as an obscure remedy that supposedly stimulates. Turtles are slaughtered so that their shells can be used to make combs and other meager souvenirs, while sharks are mutilated in the oceans, while their raw fins are sailed to Asia to be used as an ingredient in a traditional soup.

Great apes and especially chimpanzees pay a high price for this traffic. Because at the end of the chain, customers have a strong responsibility. With a terrifying ability to ignore the fraternal bond that unites us in our appearance, in our behavior and even in our genome, we turn them into unfortunate pets or embarrassing attractions for increasingly unpleasant tourists, we make them appear in ridiculous movies or commercials, we even sometimes cut their hands off to make ashtrays …

In addition to leading to the death or mistreatment of the species in question, illegal trade in wildlife contributes to the destruction of their biotopes by eliminating entire stocks, without which the entire ecosystem falters. It ravages the natural wealth of countries that are naturally gifted but powerless or corrupt. It compromises the security and economic health of states that have to deal with highly organized criminal networks. Finally, it increases the risks to global health by promoting the proximity of humans / wildlife and the associated pandemic risks.

Around the world, wildlife trade threatens the extinction of many species and seriously damages human societies. Now is the time to act.

The Jane Goodall Institute is taking practical measures on the ground with communities and local authorities to help prevent illegal trade by using a triangular approach that promotes the importance of working together and alongside law enforcement, shrines and the local population.

Our goals are threefold:

In addition to this collective mobilization, the fight against human trafficking requires a firm global response that is commensurate with the catastrophic consequences and the damage caused. However, this fight does not benefit from the necessary legal and judicial resources. In fact, the sole application of existing laws is unfortunately inadequate.

That the solution lies in part in our individual behavior: let us no longer support the actors in this despicable traffic by our silence.

Let’s take a step back from the devastating effects of animal tourism before posing on Instagram with a surprisingly sleepy tiger from an Asian monastery or the “charming” but mutilated snakes of North Africa. Before we embark on a journey, let’s find out what is allowed to be carried in our luggage before embarking on such a “local” souvenir.

The solution also lies in the efforts of the public authorities, nationally and internationally:

In France, many actors are involved in the fight against this traffic in France, including customs, OCLAESP and OFB inspectors. A regional network of 200 environmental inspectors specializes in the fight against trafficking in wild animals and animals under the direction of the Legal Police and Intelligence Service (SPJR) under the French Office for Biodiversity. Faced with the scale of the phenomenon, their powers have been expanded and sanctions have become stricter. That’s a good thing, and it’s a step forward that deserves to be welcomed.

For too long, wildlife crime has been treated as a commercial issue rather than a criminal one. We think it’s time to change that.

That is why we support the Global Wildlife Crime Initiative, which aims to establish a fourth protocol to the United Nations Convention against Organized Crime (UNCCAT). This would bring wildlife trade within the framework of international criminal law and create a framework for state obligations. Europe is working in this direction (adoption of an Additional Protocol in April). And we support the resolution presented by Angola, Kenya and Peru, which will be voted on at the 31st session of the United Nations Commission on Crime Prevention and Criminal Justice (CCPCJ) from 16 to 20 May in Vienna.

This additional protocol is important.

It is urgent to act.

France has a role to play. Also all of us.

Through these actions and together, we can ensure that all of these precious wild creatures remain #ForeverWild.

Let’s join us on this International Day of Endangered Species!

You can also find out how you can act in a concrete way to put an end to the illegal trade in wildlife in your daily life and support our actions so that endangered species are no longer, on the Jane Goodall Institute France’s website

Vivant, the exhibition open to all who put contemporary art at the service of nature conservation

Jane Goodall: “We make decisions without thinking about future generations or the health of the planetary system”

South Africa: Rhino poaching drops by a third with containment