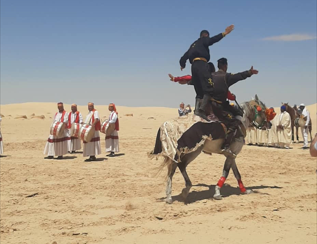 Tourism events are so rare that many have despaired over figures, perspectives and even information pertaining to the sector, yet there are professionals, never deterred by the prevailing pessimism, who work hard to carry out an action here or to seize a chance there.

As a gift from God, this May, the German DRV chose the Tozeur region for its “Destination Forum”. Ontt (Tunisian National Tourist Office), travel professionals (Tunisian Federation of Travel Agencies) and Tunisair have mobilized and held together to make this high value-added operation a success. The German delegation, consisting of 70 decision-makers from the travel and tourism sector, led by Riadh Dekhil, Ontt representative in Frankfurt, landed on the 6th of the month at Tozeur-Nefta airport, it was until 11 May, discovering the air reflections in the Sahara.

A palm tree for any tourist

The day after their arrival, the guests were welcomed by a surprise, which also delighted us especially with its originality, each of them was invited to plant a palm tree on the way to the airport, which will bear their name. The idea, in our opinion, makes sense, it naturally aims to retain guests and possibly encourage them to talk about it in their circles, imagine the effect of the storytelling from one of the leaders in his German city, who tells about his small palm tree bearing his name which is in Tozeur. Provided that the persons responsible for the region visibly place plaques on each tree and leave it known. This could inspire Ontt officials and professional associations in the regions where orange or olive trees grow and why not fig trees or other branded products to continue the experience gained in Tozeur.

Saturday the 7th of May, departure to Ong Jmal, the guides told us that the sandstorms have not stopped whistling for a month, good news, on this day the sun, the main engine of joy has come into play, more than 30 degrees and sand as far as the eye can see, the guests wore clothes in four different colors, their programs are presented in four places in the south.

To Ong Jmal’s joint program, in which a handful of Tunisian journalists participated, started an exciting trip on the dunes; Arrivals at the Star Wars location were accompanied by welcome cocktails and folklore troops, the much-needed scout photos, selfies and a battery of questions addressed to Mr Dekhil, seemingly optimistic about the state of the season, from the forecasts to the rise on the side of the Czech Republic, a country he too represents “this happy event will breathe new life into the German market,” he said.

16:00 each group will follow its itinerary, the first will depart for Douz via Chott El Djérid to discover the local tourist offer and experience a camel ride and bivouacs in tents in the desert before extending their visit to the Sahara camps in Timbaine, the second group will discover Degache, Sidi Bouhlel or Chott El Jérid and Nefta and the mountain oases of the region.

A sports circuit will benefit the third group going on a quad excursion. He will experience the experience of a flight in a hot air balloon or a paramotor. Other activities as diverse as mountain biking or yoga sessions will be offered to them.

The theme proposed for the fourth group will be “In the land of the Berbers”. Participants will take on the Dhahar massif and Ksar Hallouf. They will discover the Zammour and troglodyte accommodation establishments in the region, then Ksar Hadada and on to Tataouine.

The entire delegation meets for one last night before departure at the site of Star Wars, which is set for the final climax with a laser show program and numerous artists who will perform to close this “Destination Forum”.