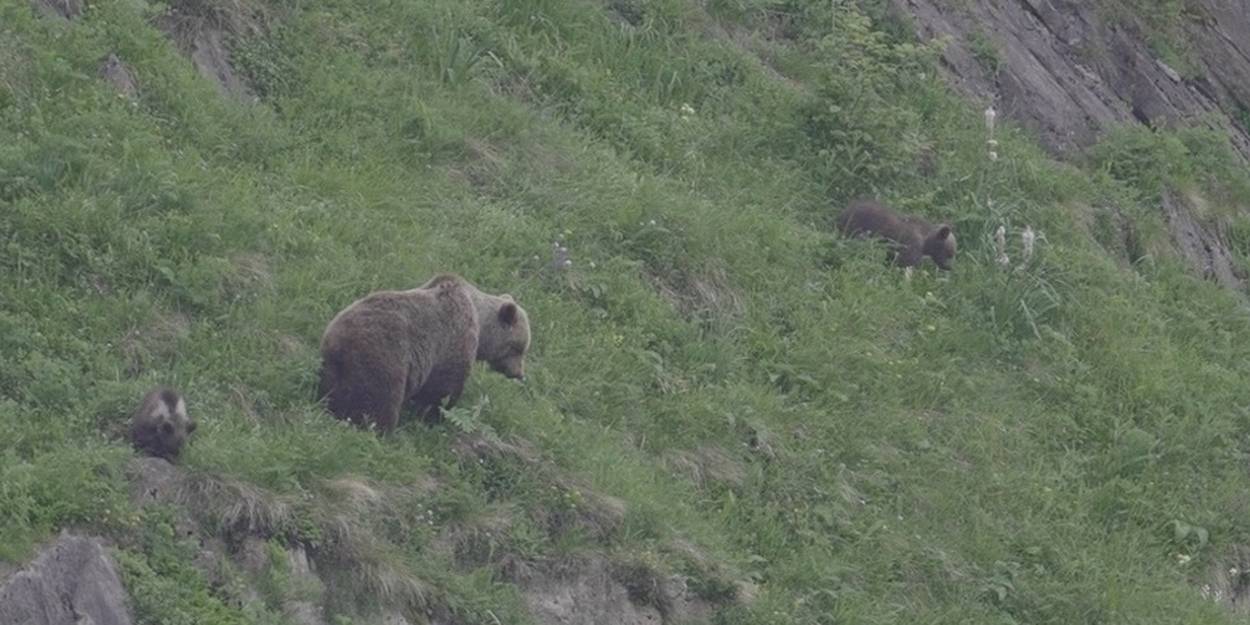 Ihere are moments in life that mark forever. Observing a bear in the Pyrenees changed my view of my mountains. It was last spring we were to take aerial photos for a documentary series about the Pyrenean wildlife. The weather is gray, rainy, and the footage seems to be compromised as the wind blows violently. After all, we decide to go up the ridge to perform a localization. And since we are in the heart of the bear zone in the central Pyrenees, where there are at least forty individuals, who knows …

We are four. Benjamin, a drone operator, takes on his grandfather’s old binoculars. A fraction of a second later he responds: “Fuck, a bear. Even through magnifying glasses, we can only detect a small dark spot that has been lost in the rock-filled monster. The two naturalists who accompany us, equipped in a much more professional way, first think it’s a gem. Those who constantly strain their eyes in the hope of observing the plant degree spend a few seconds believing in beginner luck. And still. It is truly a young male climbing up these dizzying walls close to Mont Valier.

For more than an hour we observe the animal. His power, his agility, the proof of his presence in this environment. More than 200 meters from us, he climbs up steep areas with disturbing ease. So, as if he had decided that he had shared enough, he steps out of sight to change valley. When I remember those moments, I shudder with emotion. I do not know if it is the size of the beast (the strongest males can reach up to 250 kilos in the Pyrenees) or this strength, which for us, for us humans, seems almost supernatural. Still, I know I took advantage of a rare and unique scene.

The words of Robert Hainard, this Swiss ecological philosopher, little known to the general public but a mentor to most contemporary naturalists, resonate intensely from this experience: “I deeply feel that I love this world because it resists our desires, our understandings. In fact, in these moments of observation, the being shrinks in, becomes more and more humble, becomes physically conscious of being only a tiny part of a great whole. Part of our certainty of being at the center falters. And inevitably we become different. Robert Hainard had also very early intellectualized the magic of the connection that unites us with our environment and more specifically to environments that we do not dominate, the wild nature. ”I have infinity within my reach, I see it, I touch it, I live by it, and I know I can never exhaust it. And I understand my indomitable rebellion when I see nature oppress: my infinity is killed. “

The game of fear

“I’m being killed my infinity,” that was how I felt this Saturday, November 20, when I heard about Caramel’s death (the bear’s identity has not yet been confirmed). Especially when the animal for me was identified: we had filmed it in the spring while it was grazing on a meadow at the height of its two cubs.

The news fell, the questions shot. How could a hunt be allowed in an area where many naturalists knew that one she had sought refuge with her cubs? Why did the bear accuse? Did she feel in a corner? Surrounded by dogs and hunters? Without the opportunity to escape and protect his youth? For one thing is for sure, the brown bear does not attack humans. “This unprecedented accident with a bear in the Pyrenees is unfortunately quite common with wild boar. During the last two months in France, we have noted no less than four accidents of the same type, which ended in the evacuation by helicopter of the hunter, who was injured by a wild boar, “wrote on Sunday in a press release, Fiep, the Foundation of Eco- pastoral intervention, an association that advocates cohabitation between the herds at the mountain passes and the plantigrade. These hunting accidents did not make headlines at 8 p.m. So why reserve another fate for the bear?

“We’ll end up seeing the bears wandering around the village!” the headline of a local newspaper Monday morning. According to some opponents of the bear’s presence, the mountain would become impassable and dangerous. The game of fear has once again returned to the bottom of the valleys, and the bear remains a victim of archetypal images, heresy from a scientific point of view. Raised on two legs, fangs sharp, lips dripping with blood, ready to devour anyone who tried to approach? Of course not. In fact, if the plant grade rises, it’s better to sniff what’s coming before it. As for its diet, it is 80% herbivorous and most of its consumption of animal protein consists of insects and butterflies.

“Cohabitation is impossible”, the hunting associations have also been howling since the incident. This type of claim irrigates the public debate as soon as a news story that incriminates the bear excites the media sphere. But honestly, why is France the only European country where a coexistence between pastoralism and the savages seems impossible? Among our neighbors, whether in Spain in Asturias or in Italy in Abruzzo, the issue of cohabitation no longer arises and the majority of efforts are concentrated on conserving the species. For almost twenty years, the obligations to protect plant species have been enshrined in a European directive called the “Habitats-fauna-flora”. The latter requires Member States to “maintain brown bear populations in a favorable conservation status”. Since then, France has been a poor student, Europe has called for it on several occasions, while researchers from the National Museum of Natural History have called for new releases since 2013 – which has partly happened – especially to promote the genetic diversity of The Pyrenean population. And since 2018, the state has been committed to it: every bear “eliminated” by humans will be replaced. Would Caramelle’s death mean the reintroduction of a new bear in the Pyrenees? Unfortunately, nothing is less certain.

In the meantime, an investigation has just been opened. We must hope that we know what really happened this Saturday, November 20, in the Estours Valley. We must make sure that no one knew that the bear and her cubs had sought refuge in the area. And we must reject any pessimism while awaiting the conclusions of this study. But we must be vigilant. Let us remember that in 2017, men, hooded and armed, filmed themselves threatening the state and its agents and announcing the reopening of the bear hunt in Ariège. So far, they have never been worried. Three years later, in June 2020, a bear was shot and killed, still in Ariège. The investigation has so far not resulted in any prosecution. Let’s hope this new event sounds different and finally creates awareness. Let us hope that the idea of ​​Robert Hainard is the harbinger of a beginning: “A day will come, and faster than we think, where the degree of civilization will be measured not by the grasp of nature, but by quantity and by quality. , that is, to the expanses and wildness of nature which it will allow to pass in. In the meantime, a little of my infinity has been killed.

* Alwa Deluze is a writer and director of documentaries. She lives in the Pyrenees.