The capital of the Nabataeans until the second century AD. AD and is located in present-day Jordan, Petra is an ancient city of rare beauty with the appearance of an impregnable fortress. The city, whose name means “rock” in Greek, rose in the middle of sandstone cliffs with red, purple and yellow, where the facades of many tombs and temples were carved. Important caravan center and rich trading town, it was displaced by Palmyra and began a rapid decline. Taken by the Crusaders in the 12th century, it gradually fell into ruin. Petra was rediscovered in 1812 by the Swiss explorer Johann Burckhardt and today arouses the enthusiasm of archaeologists and the wonders of tourists.

Petra, the capital of the Nabataeans

As one historian points out, “the Nabataeans are the most unjustly forgotten of all the talented peoples of the ancient world – from the Babylonians and Assyrians to the ancient Greeks”. If they are remembered today, it is primarily thanks to Petra, their majestic fortress carved out of the dark pink sandstone in the mountains that surround it, in the Rift Valley. However, this epicenter of Nabataean life, in present-day Jordan, was forgotten for nearly a thousand years – its disappearance contributes only to the oblivion into which this civilization fell, whose origins remain as hazy as a mirage in the desert. 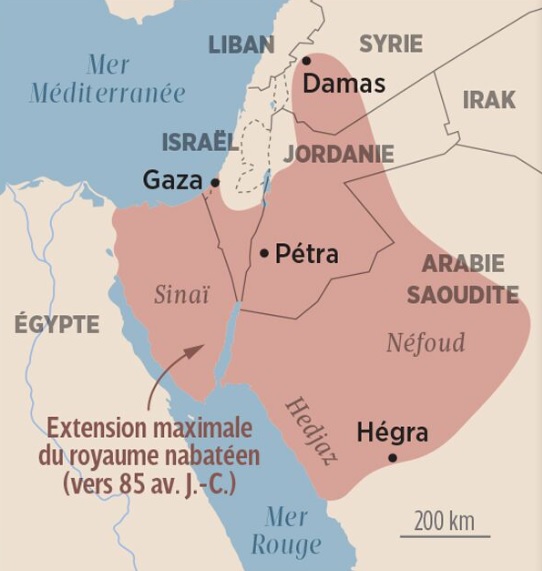 Originally completely nomadic, the Nabataeans seem to have resisted the charm of sedentary life and agriculture long after their neighbors had begun to change their lifestyle; they are believed to have been an Arab people originating from either Yemen, eastern Bahrain, or northwestern present-day Saudi Arabia. Between the 6th and 4th centuries BC. AD they probably migrated west to occupy, albeit only on a traveling basis, northwestern Arabia – an area between Syria and Egypt that the Old Testament describes as the land of the Edomites. Apparently the Nabataeans spent the next century there, pursuing their difficult lives, leading flocks of sheep and camels through this semi-arid landscape, surviving by eating meat, wild herbs and milk drizzled with honey and delivering from time to time as a last resort, to robbery. .

Gradually, however, their hikes took a more commercial turn. After populating a strategic location, at the junction of the main caravan routes and not far from the freshwater springs of the river (wadi) Musa, the Nabataeans began to become increasingly involved in the then flourishing trade in aromatics (such as incense and myrrh) between North Africa, Southern Arabia and the Mediterranean world. They also took care of the transportation, through the Sinai desert, of bitumen from the Dead Sea to Egypt. In a short time, the Nabataeans, thanks to their great adaptability, became skilled and successful merchants, and they quickly took control of all the major trade routes in the region.

They also turned out to be ingenious architects, wise peasants and skilled craftsmen who made some of the finest pottery of antiquity. In the 2nd century BC. the sphere of influence of their empire stretched from Syria in the north to Arabia in the south and from the Negev in the west to Al-Jawf in the east. Petra, their capital, was a city oasis that thrived on large supplies of fresh water. Nestled in the cave of rocky mountains and surrounded by a semi-arid desert, it was then one of the largest trading centers in the Middle East, and even welcomed Greek diplomats at the end of the Hellenistic period.

The general view, however, would be Petra’s golden age between the 1st century BC. BC and in the year 106, when the last Nabataean king, Rabbel II, died, their territories were finally integrated into the Roman Empire in a visibly peaceful way. Thereafter, the city remained relatively prosperous during the Byzantine era. 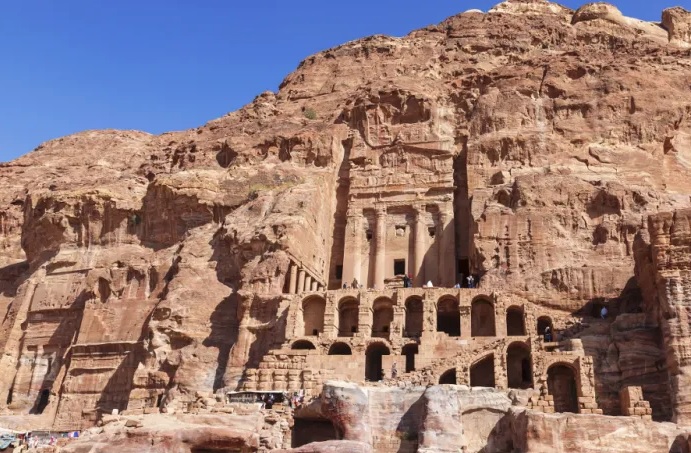 To approach Petra (a toponym that simply means “rock”), follow a winding trail through a long natural crack cut into the mountain, known as Siq. The city hides its wonders behind what was once an almost impenetrable defense barrier of rosy cliffs. Once inside the site, the visitor is instantly confronted with the magnificent finely carved stone facade of al-Khazneh (“Treasury”). This magnificent building, probably a royal tomb, was carved into the rock during Aretas’ long reign (9 BC-40 AD).

It was at this time that the city also acquired its processional paths, temples, palaces and private residences. A unique and fascinating blend of Eastern decorative and architectural styles, filled with details characteristic of Ptolemaic Egypt, Petra was largely built according to the classical Greco-Roman model, with a centrally inhabited area, or polis; a high place or acropolis; and a necropolis, namely a peripheral ring composed of tombs and memorial rooms.

The conquest of the Byzantine states of Syria, Palestine and Lebanon by Islamic forces in 636 AD. J. – C., as well as the later establishment of Baghdad as the new capital of the Muslim world seems to have put an end to Petra’s prestige. Archaeological work has revealed that some structures were damaged: perhaps they were victims of an earthquake or other environmental disaster. Almost emptied of its inhabitants when the Christian crusaders erected a fort on top of al-Habi, a nearby mountain, it was later abandoned, surrendered to dust and erosion. For almost a millennium, only the passing Bedouin tribes could observe it in silence.

The Rediscovery of Petra by Burckhardt

The rediscovery of Petra in the early 19th century we owe to Jean Louis Burckhardt. As the son of a Swiss colonel in the French army, Burckhardt spent most of his short life, as one cinematographer put it, “on exploring the Middle East convincingly disguised as a Muslim.” Although he never officially converted to Islam, he was nevertheless buried in the Muslim cemetery in Cairo under the name Ibrahim ibn Abdallah – the one he had chosen for his travels in the region. 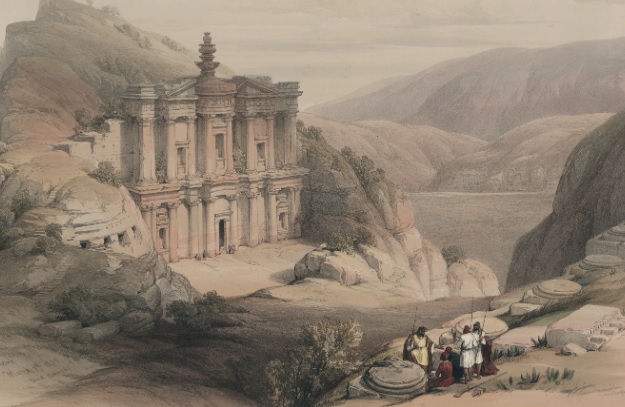 Traveling under the auspices of the Joseph Banks Association for the Promotion of the Discovery of the Interior of Africa, Burckhardt, a passionate and enthusiastic young man, did not hesitate at times to put himself in danger. After learning Arabic and reading the Qur’an, he first traveled to Syria, where he joined a caravan of camels on their way to Aleppo, before embarking on new, often extremely dangerous migrations inland until he reached the old one. ruinby Palmyra, Damascus. further south, and finally Tripoli, Lebanon and the Holy Land.

It was while crossing Moab’s rolling hills, Jordan, that he first heard of a mythical city buried in the heart of the nearby mountains. According to him, it must without a doubt be the legendary forgotten city of Petra. Under the pretext of bringing a sacrifice to the Prophet Aaron, whose tomb is nearby, he not only succeeds in reaching the city in 1812, under the watchful and concerned gaze of his local guides, but also manages to outline a plan of his layout and Location.

After another five years of hectic travel in Abyssinia (Ethiopia), Sudan, Jeddah and Egypt, Burckhardt developed dysentery and died on October 17, 1817 at the age of 33. The diaries he kept throughout his travels – usually in the greatest secrecy, in order not to undermine his cover – is published posthumously and confirms the rediscovery of Petra. But even before they appeared, his plan had already begun to circulate among other troops of Western adventurers in the Middle East.

The enthusiasm of Europeans 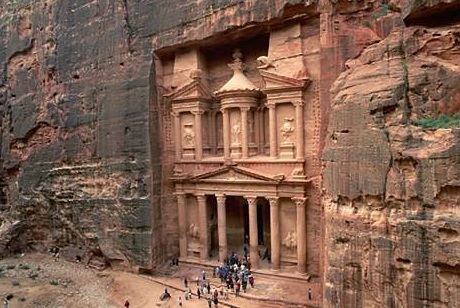 The second European to reach the city in 1818 was an experienced and learned British antiquities seeker. Far from traveling incognito, Messrs. William John Bankes, Thomas Legh, CL Irby, J. Mangles and company arrived at Petra on Burckhardt’s instructions, armed with horses, servants, weapons, provisions and gold coins, protected by a herd of Bedouin riders and blessed with the locals. sheiker’s blessing. The two days they spent in the ruins enabled them to write an account of their discoveries, and Bankes carried out many drawings which, after centuries of neglect, remain a precious testimony of the state of Petra. However, these photos remain unpublished until 1981 and collect dust in a drawer in the family home in Bankes, Dorset.

The craze for Petra only started in earnest when the French archaeologist and explorer Léon de Laborde published an account of his 1828 expedition, led by Louis Linant de Bellefonds, the future designer of the Suez Canal. Voyage of Arabia Petraea first appeared in France in 1830, in a lavish folio edition containing about twenty illustrated plates, which was a revelation to the general public. Quickly translated into English and published in 1836 in a much cheaper and less pictorial edition, this book established Petra as a romantic and spiritual place of pilgrimage for British and Victorian American tourists wishing to visit the Holy Land.

In the following century, archaeologists excavated the site in a scientific and detailed manner, revealing the presence of 619 rock tombs and even more antechambers as well as living rooms and spaces dedicated to cultural activities. Petra, however, has not revealed all its secrets. Although for decades it has suffered from the political and religious tensions of the region, the “ruddy city half as old as time,” in the words of the poet John William Burgon, is still as fascinating as ever.

– Petra and the Nabataeans, by Marie-Jeanne Roche. The beautiful letters, 2009.

– Atlas of Lost Places – Discovering the Remains of the World, by Travis Elborough. La Martiniere, 2019.