Until 18 September, the Museum of Fine Arts in Bordeaux highlights the wonderful and touching animals of Rosa Bonheur on the occasion of a retrospective event in collaboration with the Orsay Museum.

Lions, deer, rabbits, cows, dogs, bison … The Museum of Art in Bordeaux hosts Rosa Bonheur’s (1822-1899) fantastic bestiary until 18 September. An exhibition organized in collaboration with the Musée d’Orsay, which reveals the richness and complexity of the work of a freedom-loving woman who dedicated her life to animal painting. From the first room, where many visitors are already flocking to on this first opening day of the exhibition, the King of Beasts sets the tone. An extraordinary portrait of a lion, from the collections of the Queen of England, dazzles with the precision of its representation and the power of its expressiveness.

An independent and free woman, Rosa Bonheur (originally from Bordeaux) enjoyed dazzling glory during her lifetime. The sale of only one of his paintings, The horse market (1855), allowed her to acquire the castle City, on the edge of the forest at Fontainebleau, where she lived for forty years, with her companions (Nathalie Micas, then Anna Klumpke) and above all countless animals, sheep, dogs, monkeys , horses and other deer. She even welcomed a tiger into her studio for a few days, and friends entrusted her with a pair of lions, which she then offered to the Jardin des Plantes.

Falling into relative oblivion after her death – animal painting has gone out of fashion – we know her above all today for a monumental canvas, kept at the Musée d’Orsay, representing cows (Nivernais plowing, 1849). This retrospective, accompanied by an important catalog (ed. Flammarion), is an opportunity to measure the complexity of seemingly simple, almost trivial works. The course is built chrono-thematically and collects more than two hundred works, where his most beautiful paintings rub against a lot of sketches and preparatory studies of very high quality. “ We do not claim to be exhaustivewarns Sandra Buratti-Hasan, co-curator of the exhibition with Leïla Jarbouai. Rosa Bonheur has produced thousands of works. There is still a lot to discover. The idea was to bring together the essentials, to show the major themes, such as the relationship between man and animals, the work of the country and above all to highlight the artist’s creative process. “. 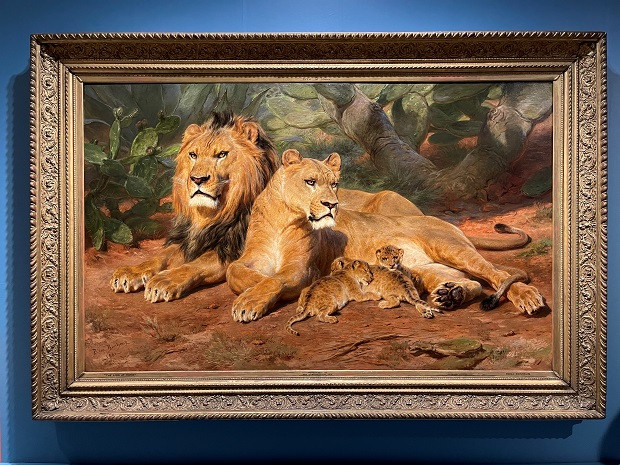 All her life, Rosa Bonheur worked tirelessly. She goes to the forest at the first light in the morning to observe the deer in the fog, draws the animals that surround her in the park on her domain, goes to the zoo to study the big cats. She immersed herself in Georges Cuvier’s works, Comte de Buffon. His knowledge of animal morphology is accurate and his talent is enormous. Every animal is reproduced with the utmost care. But beyond technical perfection, Rosa Bonheur creates true psychological portraits. ” She never seeks to humanize animals. There is an irreducible distance. We do not know what they are thinking, but for her they have a soul. They are dumb, and Rosa Bonheur tries to give them a voice that can pass through the gaze, the position of the ears … “, The Commissioner continues. 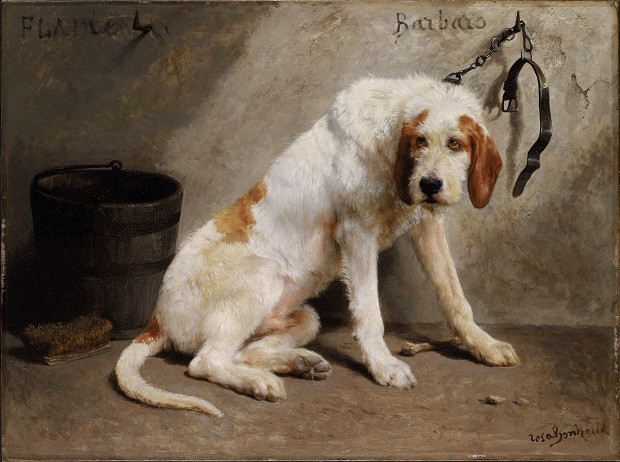 Before painting in the studio, she called “the sanctuary”, drawing and photographing the artist. She builds a repertoire of images, which she then uses to compose and recompose her painting. Seemingly hyperrealistic, his works actually create a shift with reality. When the animals are in perpetual motion, she captures their gestures, attitudes, glances and then offers a kind of freezing frame.

There is in his painting a cinematic dimension before the hour. To his “portraits” of dogs, lions, deer, horses … are added enormous compositions (up to six meters long for Wheat paint in the Camarguepreserved at the Museum of Fine Arts in Bordeaux), where the animals are no longer isolated but inscribed in vast landscapes, the realization of which he has sometimes entrusted to his partner or his brother.

The last part of the exhibition, dedicated to the American West, is surprising. For if the artist has traveled much (in France, in Germany, in England in the footsteps of Walter Scott), she has never been there. But in 1889, on the occasion of the Paris World’s Fair, she met Buffalo Bill, who had come to present his Wild West show, accompanied by his troop. She sympathizes with him, makes him pose, immortalizes horses and bison, a species she did not yet know, and which at the time was on the verge of extinction. She stages them in the heart of a fantasy wild nature, where humans and animals live in perfect harmony. A dream far from reality …