The Ministry of Health and Social Protection has just published its national monitoring and action plan against monkey pox (Monkeypox). Explanations.

The Ministry of Health and Social Affairs has launched a national monitoring and action plan against monkey pox, which is currently spreading in several countries around the world. A proliferation that has warned several scientists since it crossed Europe’s borders and has been declared in the United States, Canada, Israel and the Democratic Republic of Congo.

This response plan begins with defining the disease, Monkeypox, before discussing the mode of transmission and listing its symptoms.

Monkey pox is a viral zoonosis that mainly occurs in the tropical rainforest areas of Central and West Africa with occasional cases exported abroad. “Monkey pox is a new disease, recognized as the main orthopedic virus infection in humans in smallpox after extinction”, specifies the Directorate of Epidemiology and Disease Control under the Ministry of Health.

In the case of transmission from animals to humans, it can occur by direct contact with blood, body fluids or skin or mucosal lesions in infected animals: rope squirrels, wood squirrels, poached rats from Gambia, dormics and various types of monkeys.

Human-to-human transmission may be due to close contact with respiratory secretions or skin lesions from an infected person or newly contaminated objects. Transmission of airway droplets typically requires prolonged face-to-face contact, which will further expose healthcare professionals and members of the same household.

The symptoms are similar to those previously seen in smallpox patients, although they are clinically less severe.

The incubation period is generally 6 to 13 days, but can vary from 5 to 21 days.

Any suspected or probable case of monkey pox should be reported immediately to the health authority responsible for the public health structure, as well as the private one.

The latter coordinates as soon as possible with the regional public health service the verification of the case definition and conducts the epidemiological inquiry as soon as the case is classified as a probable case. For each case, a survey form is completed and sent to the National Center for Public Health (CNOUSP).

By “suspicion” is meant in the note from the Ministry any person who shows up with skin rash, vesicular or vesiculopustular, with fever> 38 ° C.

Likely cases can be one of the following:

A confirmed case is therefore defined as a probable case where monkeypox virus infection has been confirmed by molecular technique in the laboratory.

The management of
Anyone presenting clinical signs that are compatible with a suspected case should benefit from a physician consultation with an interrogation and a comprehensive clinical examination to possibly reclassify it as a probable case. Anyone with clinical signs consistent with a suspected case, even if it is not classified as probable, or even if a strong suspicion of chickenpox or other rash fever persists, should isolate themselves at home for two weeks with strict adherence to hygiene measures.

Symptomatic treatment should be prescribed by the attending physician, and if hospitalization is indicated, it should be done in isolation in a dedicated room. 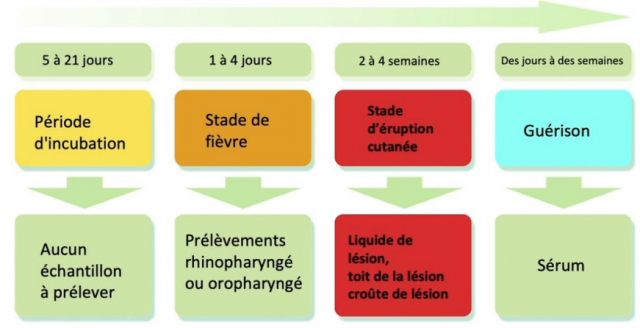 According to the World Health Organization (WHO), smallpox is a generally mild and self-limiting disease in which most patients recover within a few weeks. The Ministry of Health states in its action plan that treatment is possible with an antiviral drug known as Tecovirimat, but which is not yet widely available.

Vaccination against smallpox has been shown in several observational studies to be approximately 85% effective. At present, the original smallpox vaccines (first generation) are no longer available to the public.

However, an even newer vaccine based on a modified attenuated vaccinia virus (Ankara strain) was approved for the prevention of monkey pox in 2019. This is a two-dose vaccine whose availability is also still limited.