The creative team of Bad mother comes together again to offer a new genre narrative, but ended the feminist thriller and place to Savea post-apocalyptic western published by Panini Comics.

As predicted by the theories of collapseology, the world has collapsed. Screenwriter Christa Faust explains that riots have caused a crisis and is forcing everyone to fight for drinks. The population of the arid village Save survived, but at what cost? With the monopoly on water, one man rules with an iron fist. Faced with this dictatorship, Rose Obregón fights to save her mother, who has been sentenced to death. Will she find a solution in the famous killer nicknamed “Terror”? This summary of the first pages shows the purpose of Save : mix of two genre stories, the western and the post-apocalyptic story. We find the codes for western with a shooting lesson and then a fight in a bar. All the action takes place in the middle of a desert: in and around the village of Redemption. This city is not free, but it is dominated by a radical priest and a sheriff … who carry an old bionic eye. The main characters wear cowboy and cowgirl outfits with hats and kegs … but with sci-fi weapons and gadgets. Of course we are thinking about mad Max of the global situation in a world after the apocalypse, but also through the recycling of old technologies. Moreover, this world lacks water. This drives most of the action off Save to become car chases of unlikely vehicles for a few drops. Several battles take place in ruins.

The motto of the village should be faith or death. A group of survivors sold their freedom for safety. This atmosphere would not be anything without the hyper-realistic drawing of Mike Deodato Jr., which perfectly reproduces the dynamics of the action and the precise desert landscape with small boxes. He knows how to be very effective in combat scenes, with brief explosions of violence Save. We can understand his work in the many bonuses with the alternative covers and the comparison between the scenario and the pictures. Colorist Lee Loughridge uses the desert to create strong color contrasts between the light of day and the darkness of night. 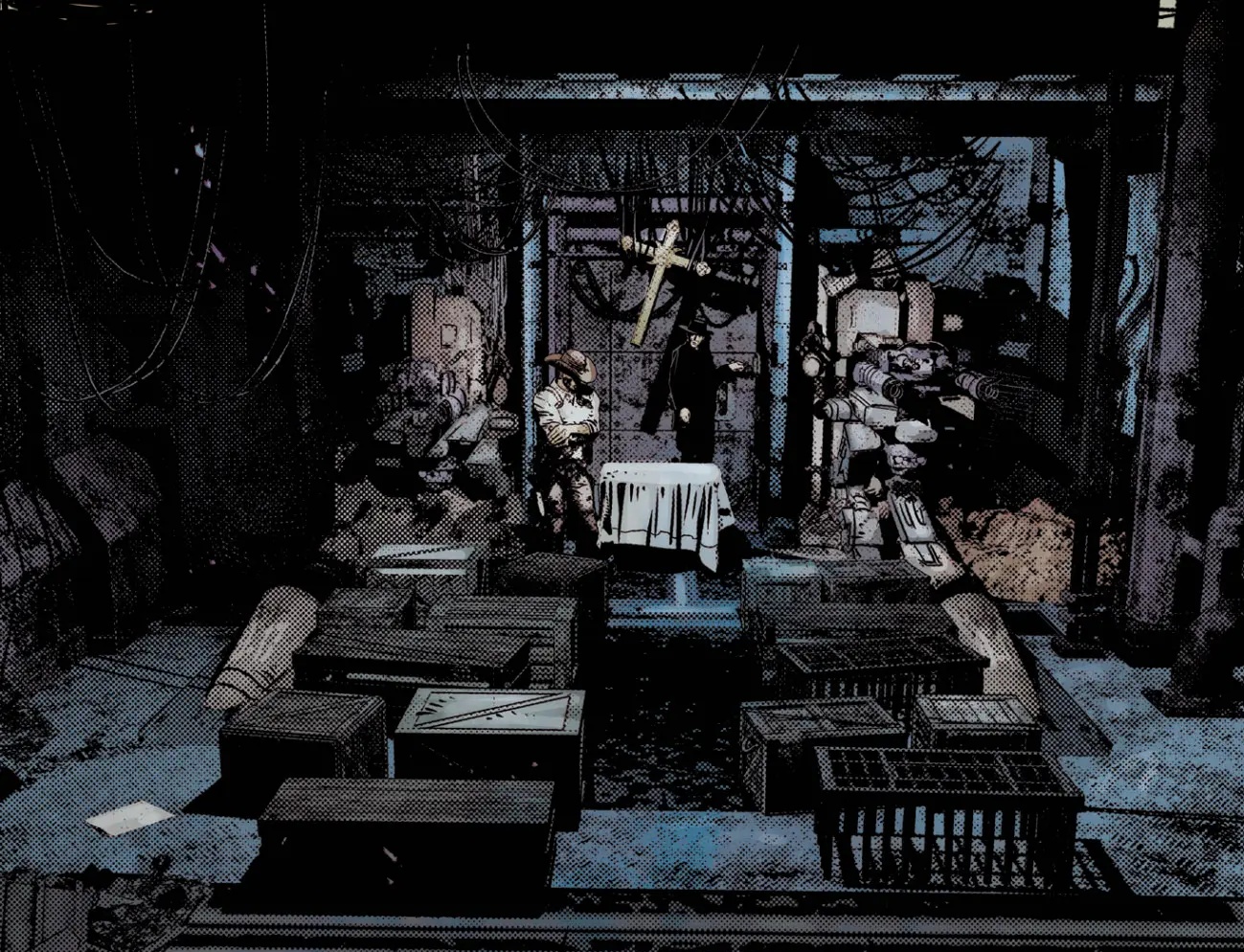 Save goes beyond paying homage to a genre by reflecting on gender. This complete story is actually a female western in a dystopia. A small community of women fights against the patriarchy from the first chapter. Pastor Stonewater whips Inez Obregón for having an abortion on a raped child. This power in men is manifold – politics, religion and security – of the mayor-priest and the sheriff. This dominion corrupts because it does not serve the people, but aims to preserve human power. In the heart of Savewe find the relationship between Rose and her mother, but with a strong woman: Cat tanners, a bounty hunter, scares men so much that she has become a black legend. This wounded heroine chose to resign. However, Rose is convinced that she too is hoping to save the city. The scenery also has a political message because the ruins represent the end of the patriarchy. However, this message is as direct as the violence is explicit. If the background is interesting and the story moves very fast, the dialogues are sometimes clumsy. We find, as in Bad mother, the same problematic self-defense praise. Conversely, a reflection on nostalgia is more interesting: is Cat Tanner real or just a legend?

You think, like many others, that Imperator Furiosa is the best character in Mad Max Fury Road ? So Save is made for you. The story is very strong and gripping. We become attached to these strong women who change the characters of westerns or the story of collapse.

You can find our selection among the other comic book releases in June and another column from the same publisher with Masters of the Universe.