In 1962, when he was 20 years old, Pierre Taurisson, along with another speleologist from Brive, discovered parietal paintings and engravings in a cave in Lot.

The intact memory of an incredible discovery

“It was sixty years ago, but the memory is intact! Pierre Taurisson, an 80-year-old Briviste, remembers as if it were yesterday when a young amateur peleologist in 1962 explored the cave Roucadour (Thémines-Lot) with a friend, he stood face to face with “paintings and engravings go back 25,000 years! It was extraordinary, incredible, especially when we were the first to see them. »

Pierre Taurisson with newspaper clippings from the time that resumes the discovery.
With Jean-Paul Coussy, another member of the spellology club in Brive, whose headquarters were in the cultural center, the young man he was wanted to go and take a closer look at this cave, a sinkhole in the Causse de Gramat, which had been explored in 1890 by Edouard-Alfred Martel, discovers especially by the Gouffre de Padirac, and where archaeological remains had been recognized in 1925 by André Niederlender. This prehistorian found from 1951 at the entrance to the cave a very rich habitat dating from the Neolithic and Bronze Ages, that is, the first peasants and the first metallurgists (5,000-2000 BC).

“A bronze sword had been discovered, we told ourselves that there might be something else to be found,” says Pierre Taurisson, whose passion for prehistory had been passed on to him by his neighbor … Abbe Bouyssonnie, who with his brother, excavated the skeleton of the first Neanderthal at La-Chapelle-aux-Saints.

Instead of looking for other rooms, stalagmites and stalactites, the two speleologists in the depths of the cave have discovered a side gallery connecting the main gallery, 60 meters from the entrance: “Access was difficult, the entrance no bigger than a mailbox! You really should have the ambition about looking further to get there. ” 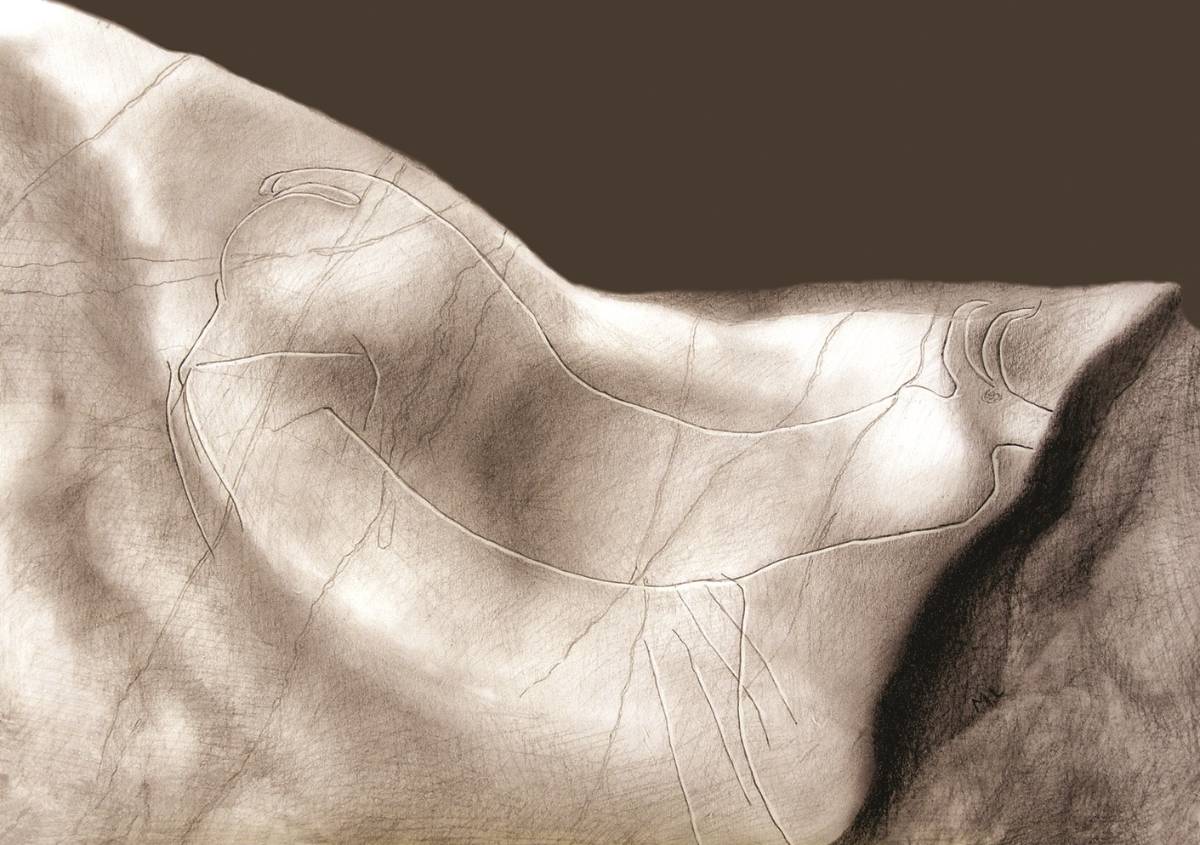 An aurochs engraved in the cavity.

And it was while climbing up the wall in a diaklase (wide crack in the wall), 5.5 m high, that they encountered the first engravings. In this reduced space, about 500 representations of animals, signs, and negative hands originating from the Upper Paleolithic were revealed to their eyes, their position in height due to the collapse of the earth.

“I remember this little horse engraved in stone, of a formidable size to draw its curves: it was a thoughtful gesture!”

“I had the impression of coming into contact with the creation of men who had an intelligence and a knowledge of nature that has evaporated, which we unfortunately no longer have,” recalls Pierre Taurisson, who together with his friend informed the archaeological community. of Toulouse of their discovery.

Surveys conducted by an international team from 2002 to 2008

After the discovery of these parietal representations, their investigation was entrusted to Abbé André Glory, who had just studied Lascaux but was to die in 1966. It was not until 2002 that investigations could resume, following the redemption of the cave by the State in 1992. and the installation of a metal platform installed 5 meters above the ground.

Murder in Lascaux: The Neanderthal man leaves his mark

“Until 2008, Michel Lorblanchet, Honorary Research Director at CNRS, and Jean-Marie Le Tensorer, Honorary Professor at the University of Basel (Switzerland), conducted, with an international team of specialists, a very precise study of all the numerous engravings and paintings; the archaeological and geological context of the cavity, ”explains Pierre-Yves Demars, Brive and vice president of the Préhistoire du Sud-Ouest association, which has published a book revealing the unpublished results of this team. 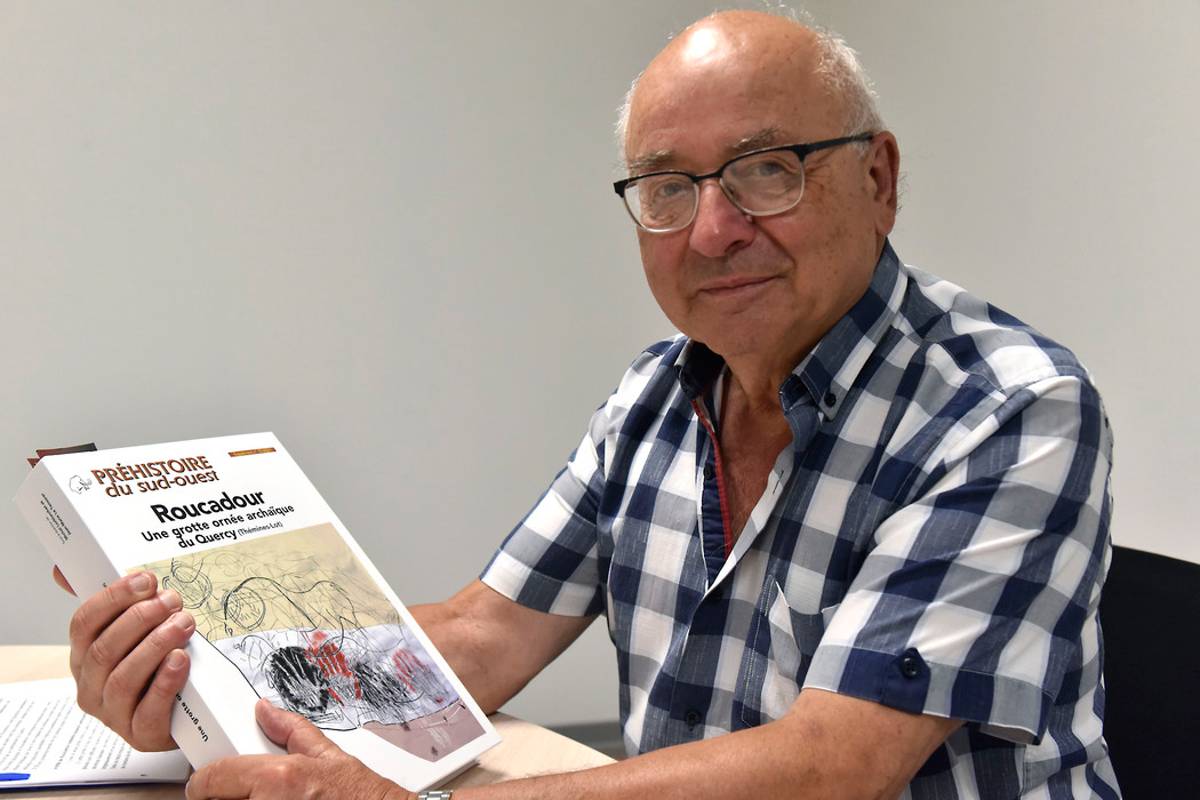 The Préhistoire du Sud-Ouest association has dedicated a book to the Roucadour Cave. Photo by Justine Bavois.

A book that allows you to get into the inaccessible cave

This book sheds light on “one of the oldest parietal shrines in Paleolithic Europe, little known because it cannot be visited due to the cramped conditions of the place,” explains this former CNRS prehistorian. His figures present archaic stylistic canons that place them in an ancient period: Gravettian (beyond minus 20,000 years). “

Southwestern prehistory. The association based in Cabrerets (Lot) promotes and supports archaeological activities, from prehistory to protohistory, in the southwestern quarter of France. His latest work: Roucadour. An Archaic Decorated Cave in Quercy (Thémines-Lot), 409 pages, 40 €. To order at www.prehistoiredusudouest.fr.

Divided into twelve panels, the set presents a rich bestiary of 137 animals: horses, cats, megalocero deer, bison, mammoths … To this must be added 220 characters, thirteen images of hands and three anthropomorphs. “In particular, there is an astonishing mammoth hunt of a pride of lions, which ends with the fall of a mammoth, probably from the top of a cliff. It is the first track of a pictographic writing or cartoon. »

500,000 visitors in a year in Lascaux IV: a look back at the site’s history in six dates

For Pierre-Yves Demars, who hopes to be able to hold an exhibition in Brive, “it is a religious art, in the same sense as the art found in churches. This figurative art, which does not seek to be realistic, but to designate animals or others, is a proof of the complex thoughts of these prehistoric men, similar to ours. »