“Even the most turbulent children become very attentive when the legend of Hercules in the Gardens of the Hesperides is told to them,” confides Hicham Hassini, archaeologist and curator of the Lixus Archaeological Site, with a hint of mischief. Golden apples from the Jardin des Hespérides is the penultimate sample of Hercules’ twelve works, whose theater is none other than the oldest of the ancient cities of Morocco, Lixus. And it is this enchanting legend that Hicham Hassini never gets tired of telling during school visits. Proof that no one can resist a good story.

“I love to tell this legend about Hercules, which would have taken place here in Lixus (also called ‘The Giants’ Killer’, editor’s note). His battle with Antaeus, a local giant, and then his encounter with Atlas, the other local giant.Children love stories.They are immediately caught up in everything that is mythological.I often tell them that the caption is very important.Although there are many extraordinary events in a legend, but it also contains valuable information.In the legend about the meeting between Hercules and Atlas, for example, there is geographical information relating to Atlas: Morocco’s mountain range, ”explains our interlocutor, who has been keeping an eye on this ancient site for twenty-two years.

Hicham Hassini also reminds us that among the missions of preserving cultural heritage is consciousness. Children, young people and NGOs about the importance of this historical, archaeological and cultural heritage are a priority. “The protection of Moroccan heritage is everyone’s business,” he recalls. Especially when this heritage has stretched over centuries and carries its share of real stories and famous Greek myths.

And it is from this mythology that Lixus derives its special aura. In Morocco, only two places can claim to have a basic myth: Tangier and Lixus. “About the founding myth of Lixus, it is said that the Phoenicians founded a temple or an altar towards the end of the 12th century BC. J.-C. Lixus, ”says Hicham Hassini.

This historical, archaeological and even legendary significance led the Ministry of Culture to fund a development and development project for the site. The project started in 2009. It involved the construction of physical protection of the site, through a fence and the installation of on-site conservation to allow the manager to manage the site. “, exhibition halls (cultural heritage interpretation centers, CIC), etc. Thanks to a Moroccan-Italian partnership, we have set up the tour circuit with explanatory panels. After the completion of all the works, the site was officially inaugurated on February 20, 2019,” says the curator of the Lixus page.

The conservation team in this old city is continuing on this momentum and two new projects have been started this year. The first, funded exclusively by the Department of Culture, aims to improve the infrastructure for visitor access. The second project, still within the framework of Moroccan-Italian cooperation, consists of restoring two important monuments on the site: the Roman amphitheater and the palace complex. The Lixus venue is open to the public with a ticket office every day of the week from 9 a.m. to 6 p.m.

The oldest ancient city in Morocco is located 4 km from the city of Larache, on the right bank of the Loukkos river and covers an area of ​​70 ha. The Phoenicians settled there as early as the 8th century BC. J.-C. for barter, at the time when there was no currency. The commercial exchange of products of the same value took place naturally with the local people at that time.

“From an area point of view, this counter was quite limited during this period. It has evolved over time. And a century later, we witnessed the emergence of a city that covered more than 10 hectares (in the 7th century BC). The Phoenicians came to look for products that were highly valued and present in the territory of Lixus. We are talking in particular about ivory from tusks from elephants, skins of wild animals, such as lions and panthers, and skins of domestic animals, in addition to feathers and shells from ostrich eggs, says Hicham Hassini. If the actual installation of the Phoenicians at this site dates from the 8th century BC. J.-C., archaeologists believe that the participation of this civilization of Lixus would have started in the late 12th century BC. J.-C.

The Phoenicians then occupied the place for about two centuries. A period in which trade between the people of Lixus and the rest of the Mediterranean population involved products from several regions of the Mediterranean, such as Cyprus, Carthage, the Italic Peninsula or the Iberian Peninsula. During archeological excavations, these products were found at the site. 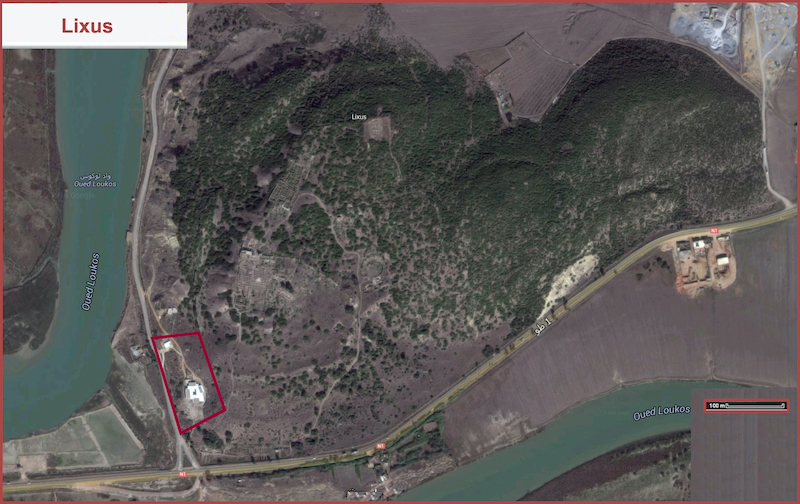 “After the advent of what is called the Moorish or Mauritanian Empire, that is, the local Amazigh Empire, Lixus became one of the capital cities of this empire. We therefore know the names of several kings, especially the last ones: Juba II and from his son Ptolemy, and from the year 40 AD J.-C. province, under the name Tingitane Mauretania. This Roman presence lasted almost five centuries “, says Lixus curator. Then will succeed” the dark centuries “named as such, because there is almost no information about the 6th, 7th, 8th and even the 9th century.What is certain is that Lixus will then be occupied by Muslims and Arab conquerors.And this Arab presence will last until the 14th century AD J.-C.

The history of the city therefore took place over almost 22 centuries, from the 8th century BC. AD until the 14th century AD. And from the 14th century, maybe the 15th century, the place will be completely abandoned. It should just be noted that Lixus changed its name in the Middle Ages; we no longer find Lixus, but instead ‘Tchoummich’ or ‘Choumich’, in the old texts from the Middle Ages “, points out Hicham Hassini.

If different civilizations have had success in this ancient place, it is because it has several advantages. First, the presence of the hill on which the city of Lixus was built. It overlooks the lower valley of Loukko to a height of 80 meters above sea level.

“The location is quite well protected from a security point of view. In addition, it has direct access from the mouth of the Loukkos river. Let us not forget that the Phoenicians were navigators and traders. People always chose places close to the coast, and which at the same time gave “They also chose this place to have the opportunity to carry out commercial transactions with the locals. And on the other hand to be able to exploit the region’s natural resources. That is, agriculture, cattle breeding and exploitation of fishery resources,” says the curator of Lixus. is a significant proof of this.In pre-Roman times, ie Mauritania, the city of Lixus issued its own currency.On this currency there are three products: fish (sardines and tuna), bunches of grapes and ears of wheat.These three products represent the most important economic resources in the city of Lixus. And even today, agriculture and fisheries are the most important economic resources in the city of Larache. “

Lixus will thus establish commercial connections with all the cities of Morocco, especially those located inland. The oldest of the ancient cities of Morocco had a very important economic potential.

“Lixus exported its products and imported those it did not have, such as olive oil, for example, as it could not develop a real olive oil industry. From a climatic point of view, the Phoenician city could not grow the olive tree at that time, but it could easily supply itself in other cities, especially in Volubilis. “

“The city had other commercial connections with several regions in the Mediterranean. There is evidence that Lixus exported the salted fish to other parts of the Mediterranean in amphorae. These large jars of inscriptions have been found in other areas of the Mediterranean, especially in the southern part of the Iberian Peninsula, the Italic Peninsula and even in Switzerland and Germany, ”says Hicham Hassini.

Although much of Lixus’ history has now been dusted off, the site has yet to reveal all of its secrets. Only 10% of the area has been excavated. The first excavations began in the late 19th century. “This archaeological research continued under the Spanish protectorate of Spanish archaeologists, then in the 1960s by a French archaeologist. And finally from the 1990s by mixed Moroccan-Italian, Moroccan-Spanish and Moroccan-French teams,” the archaeologist emphasizes.

Dust off the past

In 2022, two excavation programs are planned: The first excavation program for the preservation of Lixus will be carried out with the support and cooperation of the National Institute of Archeology and Heritage Sciences (INSAP) in Rabat. The second program is a draft agreement and partnership between INSAP and the Spanish University of Cadiz (Cádiz). These two projects aim to discover new areas of excavations to complete the scientific information of the archaeologists of the site about the significance of the city of Lixus in the different periods of its history. But not only. It also involves the development of archeological resources to show national and foreign visitors new discoveries at the Lixus site.

The ancient excavations have already revealed very important monuments. We can mention the industrial complex, which specialized in salting fish. It could produce up to 1 million liters per. fishing. The salting focused mainly on tuna. The city of Lixus also has a Roman amphitheater, the only one that has been excavated at an ancient Moroccan site so far. In addition, “Roman houses, which are large dwellings generally well decorated with mosaics and murals. Lixus also contains the palace complex, which has been dated to Juba II and Ptolemy, and a number of structures such as enclosures, water cisterns and several archeological structures belonging to several civilizations ”.