According to the plans presented by the German Minister of Agriculture Cem Özdemir on Tuesday (June 7), every animal product produced and sold in Germany will soon indicate the conditions under which the animals were bred.

Manufacturers will have to introduce the new measures step by step over the next two years.

“Breeding in Germany can only be suitable for the future if it respects animal welfare”said Cem Özdemir during a press conference, where he presented a reference document with the aim of establishing a labeling system at national level for products made from farmed animals.

Already in their coalition agreement, the three governing parties in the country had set themselves the goal of introducing a mandatory animal welfare label. Shortly after joining in December, Mr Özdemir announced that it would be introduced before the end of the year, at least for certain product groups.

According to the Minister, the label must help to make farmers’ investments in animal welfare more visible and at the same time create more transparency for consumers.

Consumers “want to know how the animal they buy meat from has lived, and they also want to express their expectations for the future with their buying decision where possible”stressed the Minister of Agriculture.

Germany currently has no state-imposed labels for products of animal origin.

Last year, former Agriculture Minister Conservative Julia Klöckner’s plan to introduce a state-run but voluntary brand failed due to opposition from the Social Democrats (SPD). , the then coalition partner, against such a project. At the time, the SPD wanted to introduce a mandatory label instead.

Like eggs which must bear a number indicating how the laying hens are reared, Mr Özdemir’s draft products of animal origin contain an indication “clearly visible” living conditions of the animals.

A distinction should be made between five different types of farming, ranging from indoor farming without outdoor running and without fresh air to outdoor farming, where organic production constitutes a separate category.

Mandatory labeling will apply to all foods containing products of animal origin, including processed products, such as frozen pepperoni pizzas or salads prepared with chicken strips.

For the time being, however, it is all for the future, because the first step will only be to impose on the fresh pork sold in the fresh or frozen department the labeling obligation, which will then be gradually expanded.

In a statement, Greenpeace stressed that ham, frozen processed products and beef and poultry meat were not targeted at this time.

Moreover, the breeding method that serves as the basis for the labeling does not yield “virtually no indication of the actual welfare of the animals”explained Martin Hofstetter, Greenpeace expert.

The organization Foodwatch expressed a similar view, in which Annemarie Botzki, an expert in the group, explained that the breeding method alone “says nothing about the real health of the animals”.

The German Farmers’ Association (DBV), for its part, considered that the concept presented by Mr Özdemir constituted a “Significant first step”but still had “significant deficiencies”.

As long as no timetable has been set for the extension of the labeling obligation to include processed products and for meat other than pork, “there will be no indicative effect and the concept risks being compromised in the market,” says DBV President Joachim Rukwied in a message.

Financing, a point of contention

Agricultural associations and animal rights activists have also emphasized that labeling must be part of a broader concept for restructuring livestock farms.

It must, for example “accompanied by changes in the Building Act and a sustainable long-term financing concept”Mr Rukwied explained, while Mr Hofstetter, meanwhile, stressed that the government must raise enough money to finance the restructuring.

However, this labeling is only the first of four elements that the German government wants to implement for the animal husbandry of the future, Cem Özdemir explained.

“Agriculture in Germany can only have a future if it gives farmers a perspective that also enables them to earn a good income”said the Minister of the Environment.

In addition to a mandatory label, the ministry also wants to present changes to the Animal Welfare Act, adjustments to the Building Act and the Permit Act and, above all, a financing concept for long-term conversion of stables to more animal-friendly ones. structures, he continued.

This last point, however, could prove to be fragile within the coalition. The Liberal Democrats (FDP), for example, recently expressed their opposition to a proposed animal welfare tax on farmed products, and the coalition has not yet agreed on a method of financing. 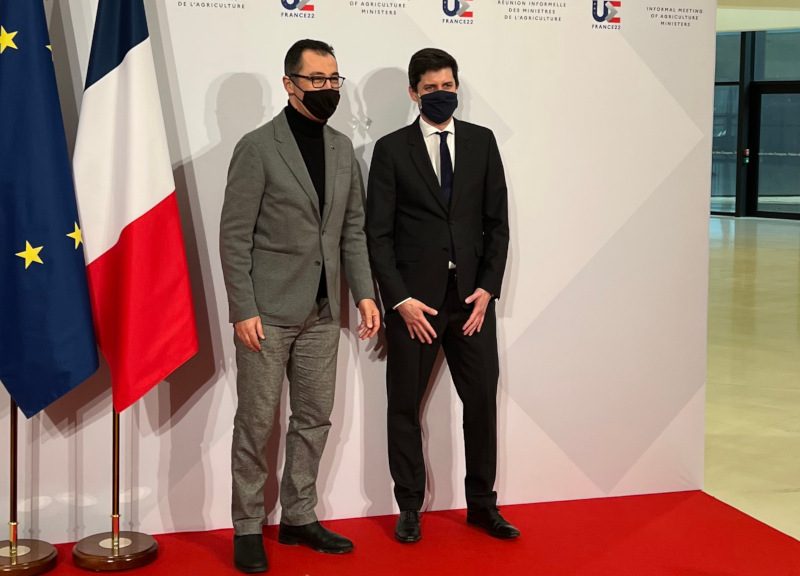