There is a place in Berlin where the birds are so numerous that their song drowns out the noise of humans. It is neither hidden nor secret. 200,000 people visit the Tempelhof public park in the heart of the German capital every week. In the summer, people come here to sunbathe, barbecue, teach the children to step on the pedals … On one condition: not to exceed the white and red ribbons, which reduce the park to a third of its surface, from 1.eh April to July 31. Behind him, the lawn provides space for a large expanse of tall grass and grass, a dense landscape dotted with scattered shrubs and poppies.

“ This is the territory of the larksexplains Norbert Kenntner, from the Foundation for Nature Conservation in Berlin (Stiftung Naturschutz Berlin), a pair of binoculars slung over his shoulders. It is a species that has the special feature of building a nest on the ground, well buried in the middle of the grass. To leave the birds alone during the incubation period, and to protect the young, the vegetation is allowed to grow and the area is forbidden access. »

In addition to this restricted area, access is prohibited for users. © Stefanie Loos / Reporter

Larks are able to sing for almost an hour at a time. In the park, the males sprout into the sky to defend their territory and push hard “ rolls » melodic – their repertoire is one of the richest in the bird world with no less than 600 tones. The small brown puffed bird, which has long been known in the European landscape, is now on the red list of endangered species, in France as well as in Germany. “ Intensive agriculture is responsible for their declinesays the ornithologist. There are fewer and fewer meadows, more and more rapeseed and maize monocultures … the larks are losing their habitat and their food. » 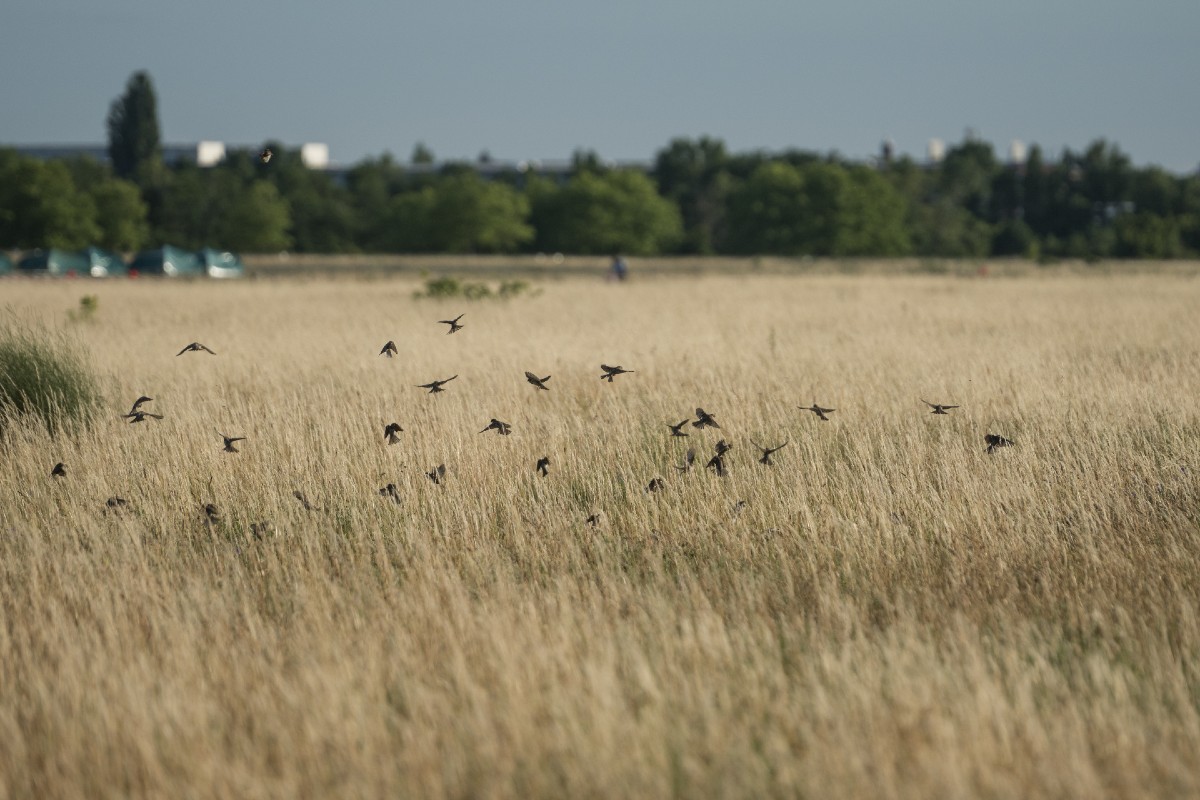 Berlin has become their refuge. The metropolis concentrates the highest density of larks in Germany. In Tempelhof they settled as the park was still an airport inherited from the Cold War. In 2005, there were 95 couples. Thanks to the protection program, there were 221 in 2018, “ and probably a little more today », assures Norbert Kenntner. The larks are not the only ones who benefit from this urban prairie, which is rich in insects and earthworms. Here a swallow ; there, a canary, a red pipe ; further ahead a corn sparrow. “ Look in the background: a buzzard is coming »exclaims the scientist, who says to himself “ always so fascinated by the diversity of birds found in Berlin » when he came twenty years ago. 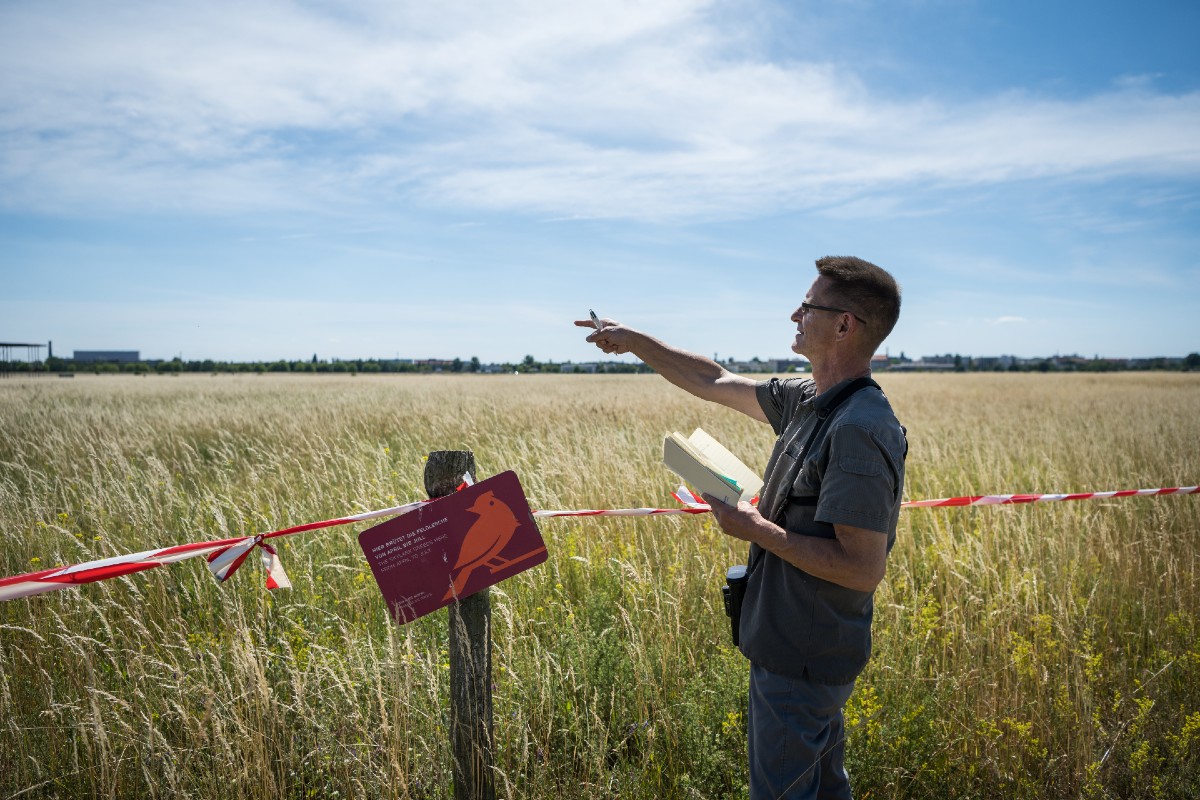 Norbert Kenntner: The cloud lark is a species that has the special feature of building a nest on the ground, well buried in the middle of the grass. » © Stefanie Loos / Reporter

The measure is well accepted by the residents. Violations are rare: a few unscrupulous dog owners who let them mess in the grass. “ We have enough space elsewhereconfirms Basti, a regular at the park. And then it’s great to be able to observe and listen to the birds. You do not see it everywhere ! » From August to September, the area is gradually cut, plot by plot, to be returned to humans. The larks migrate south before returning the following spring.

Is this strategy enough to make Berlin a bird’s paradise? ? Not yet, according to the Berlin Ornithological Society (BOA). Of the 185 species found in Berlin – similar to Grand Paris in size [1] -, half is “ in an unfavorable state of preservation »especially due to global warming and repeated droughts. 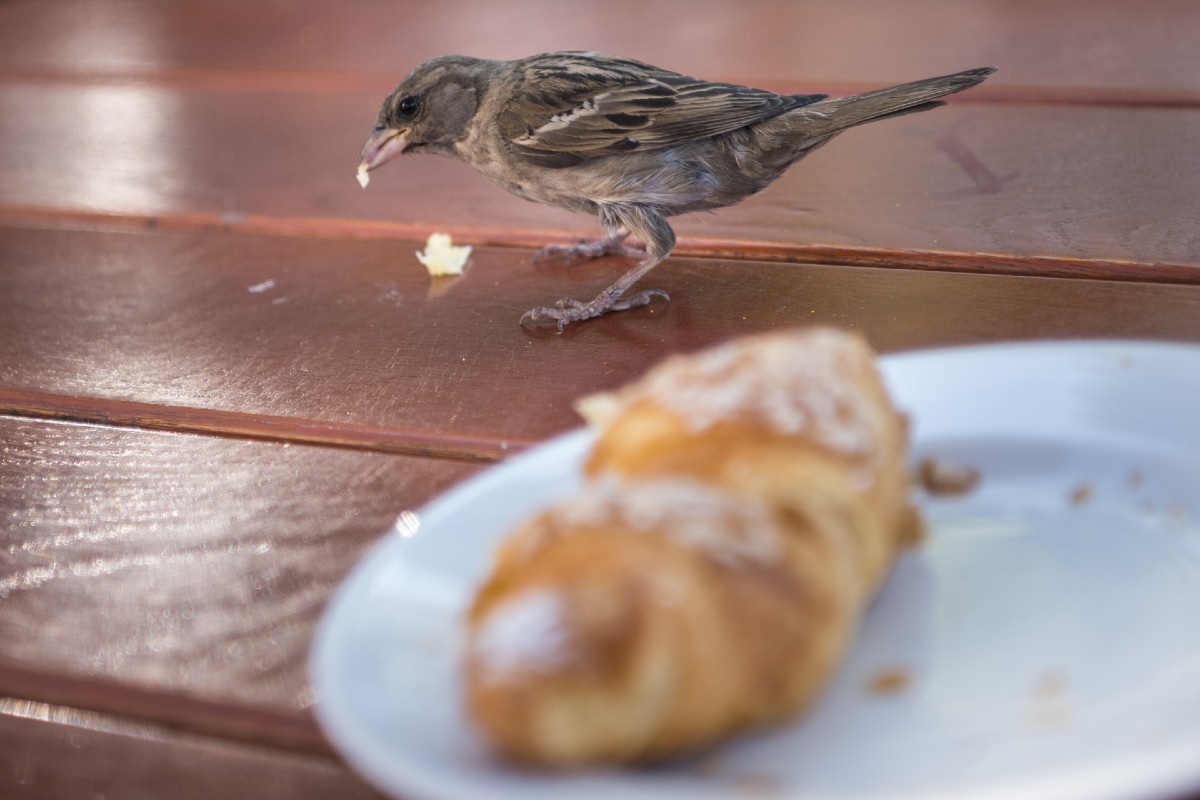 In Berlin there are about 200,000 pairs of sparrows. © Stefanie Loos / Reporter

But while they fall elsewhere, many species resist, yes thrive. In the city center you can easily see thrushes, starlings, finches, carrion, sunflowers, chickadees or jackets. The number of night owls increased by 1.2 % per year between 2005 and 2020 in Berlin, where it fell from 90 % in London. The number of sparrows increases by 1.5 % in the same period, while three quarters of them disappeared in Paris. “ Birds are a good indicator of the state of biodiversityexplains Norbert Kenntner. If they are well, they have enough nature, safe habitats and enough to eat. » 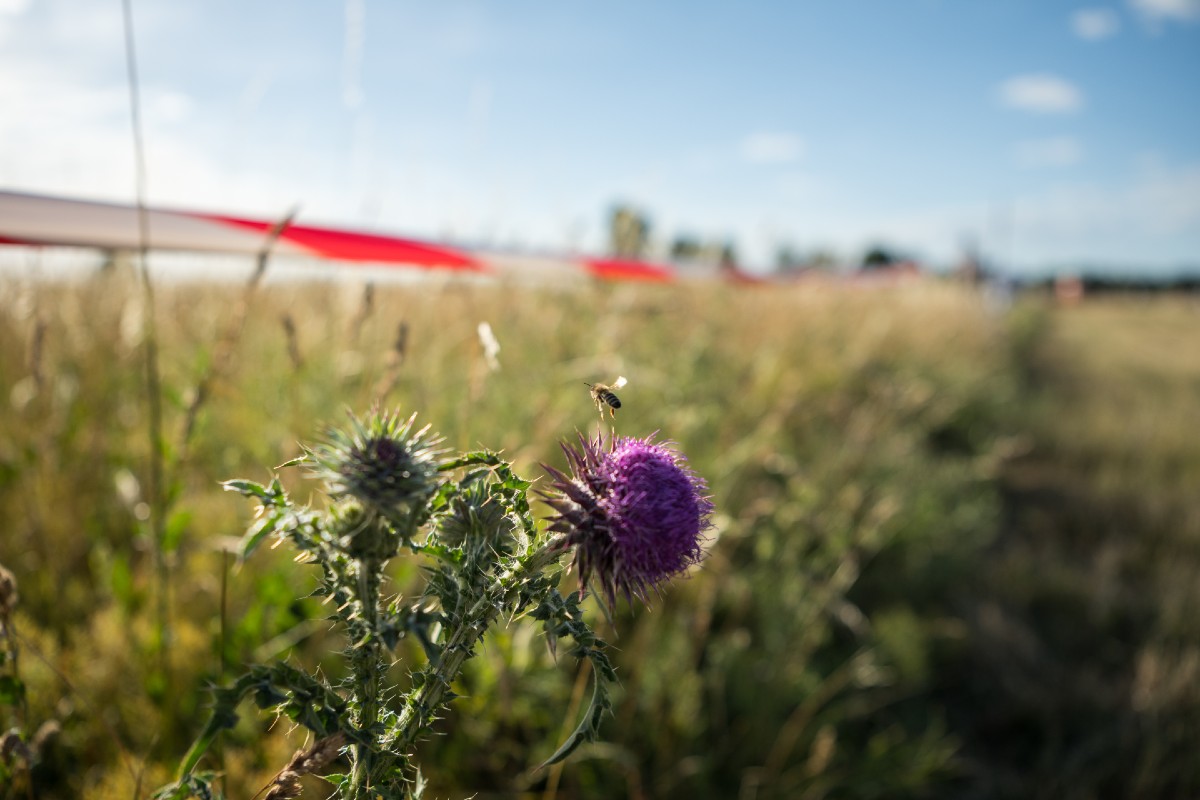 In the area reserved for birds, biodiversity is rich. © Stefanie Loos / Reporter

“ We can put nature anywhere without destroying »

From parks to forests, from private gardens to cemeteries, from wastelands to fields: the metropolis with 3.7 million inhabitants has 42 % of areas classified as green, compared to 30 % ca. for Greater Paris. A historical legacy inherited from the Industrial Revolution: “ On XIXe century, when we built factories all over Berlin, we designed green axes that crossed the city to evacuate bad smellssays Derk Ehlert, the municipality’s wildlife referent. Later, when Berlin was divided between East and West after World War II, the authorities kept these spaces, especially in the West, so that the inhabitants could have places to relax – at that time it was very difficult to get out of the city. » 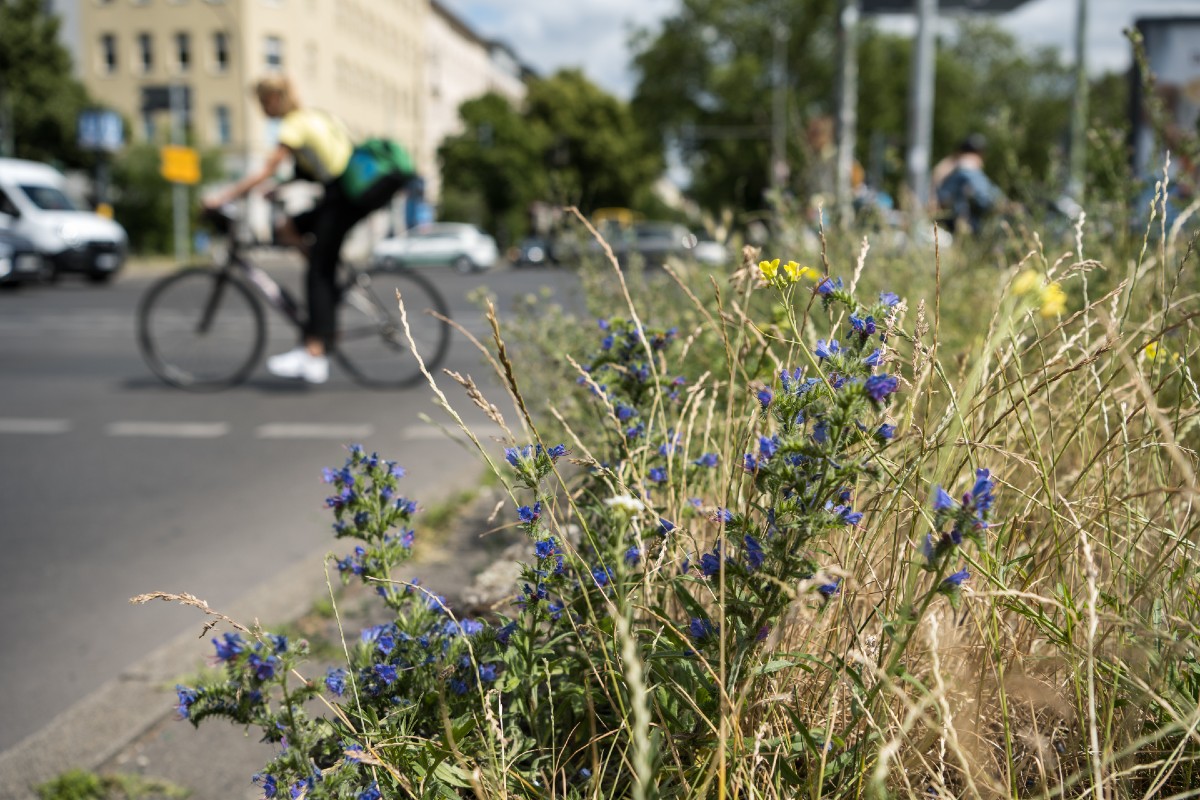 Lines of green areas cross the city of Berlin. They are cut a maximum of four times a year. © Stefanie Loos / Reporter

After the fall of the Berlin Wall in 1989, two camps collided: on the one hand, those who wanted to build as much as possible to ensure the economic recovery of the city, and again became the capital of the reunited Germany ; on the other hand, those who saw nature as an integral part of Berlin’s identity.

“ We fought to work with nature, not against it », remembers Ingo Kowarik. His line won. For twenty years, this dedicated botanist was the nature conservation delegate for the Land of Berlin. “ What we wanted to show is that we can place nature everywhere without necessarily destroying it: in the inner courtyards of buildings, in the central centers of the streets, on the sidewalks around treeshe says. It creates a mosaic of biotopes that promotes biodiversity. »

The poor, Berlin country after reunification did not have the means to create new parks. But a federal law from 1976 helped him: In order to build on virgin land, the initiators of real estate projects since this law must compensate for the damage to the environment that they generate, especially when developing new natural areas. Funded by Deutsche Bahn, the German railway company, the Gleisdreieck and Südgelände parks have thus been designed as semi-desolate fields for the benefit of roots, songbirds and nightingales. 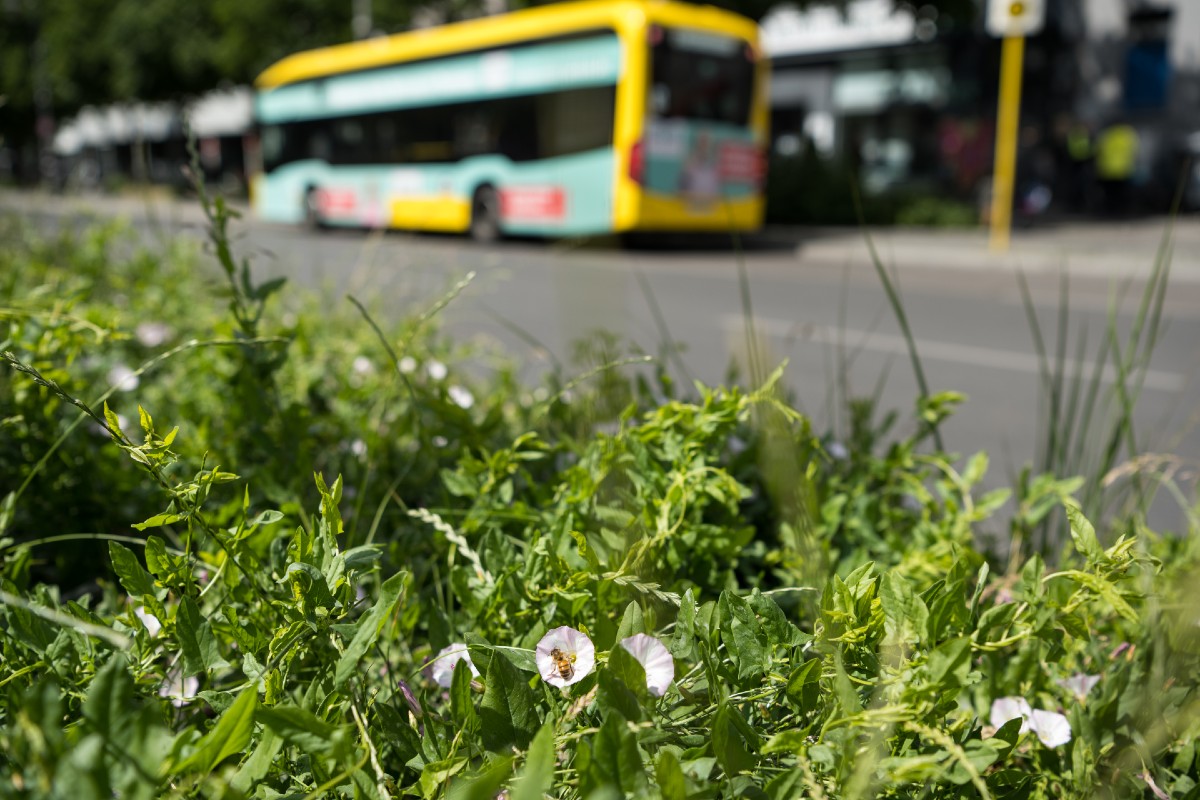 Since 2019, 42 hectares of grass have been transformed into “ flower ribbons along the streets of Berlin, which attract insects. © Stefanie Loos / Reporter

In Germany, Berlin is a pioneer: Since 1992, the use of herbicides has been banned throughout the state with rare exceptions. Particularly popular among birds, deciduous trees that reach 80 centimeters in circumference can only be felled in case of disease. From May to September, it is also forbidden to mow hedges and shrubs to protect the young. All its rules also apply to individuals. For mowing public spaces, “ it is a maximum of four times a year, and never all at the same time »explains Oliver Voge, head of nature conservation for the central district of Friedrichshain-Kreuzberg, the closest in Berlin. 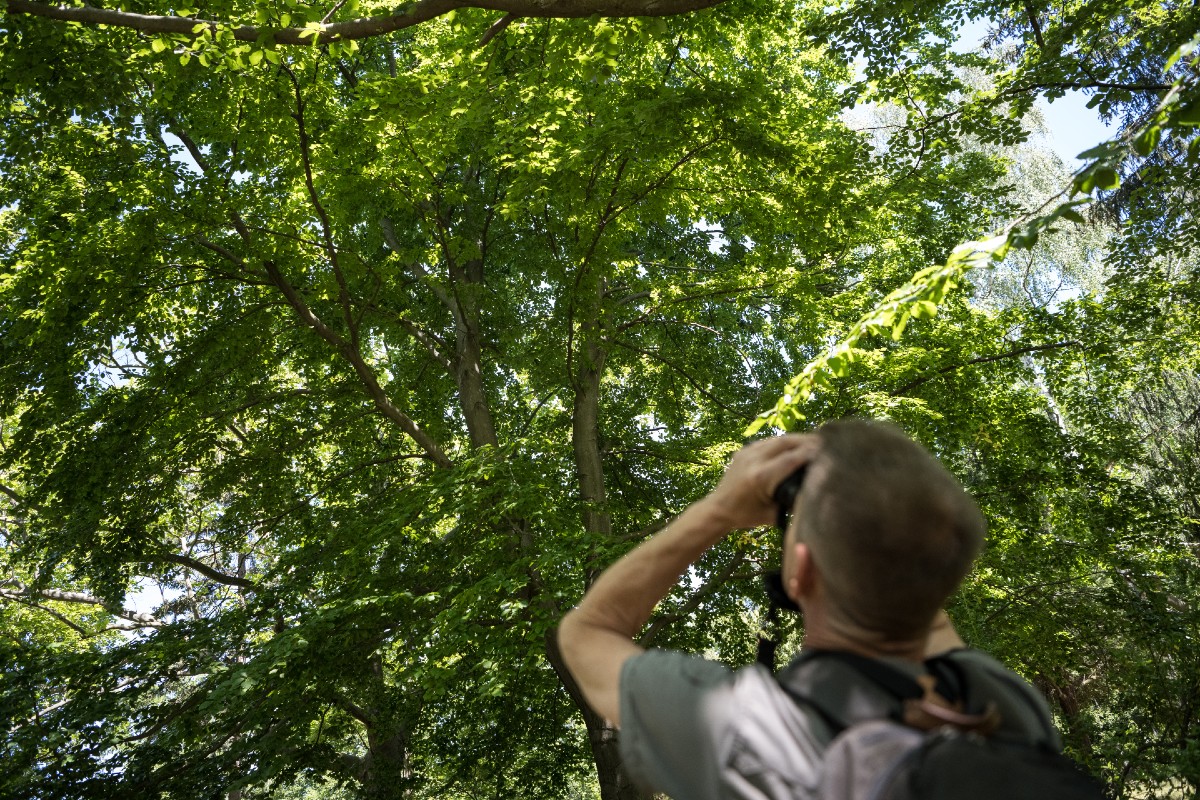 Norbert Kenntner observes a walking hawk (a rare urban bird of prey) nest in a cemetery in the center. © Stefanie Loos / Reporter

In the courtyard of the arrondissement’s town hall he had installed nesting boxes for swallows, swallows, sparrows, black red-tails: a kind of exhibition intended for building owners. Since 2014, if they want to renovate and their property is home to birds, they need to install new nest boxes that fit the same species. “ We learned from our mistakesexplains Oliver Voge. In the 2000s, we massively renovated the building in the eastern half of the city without thinking that by closing all the holes we also eliminated habitats for certain birds. » The measure made it possible to “ stop the decline »says the official. 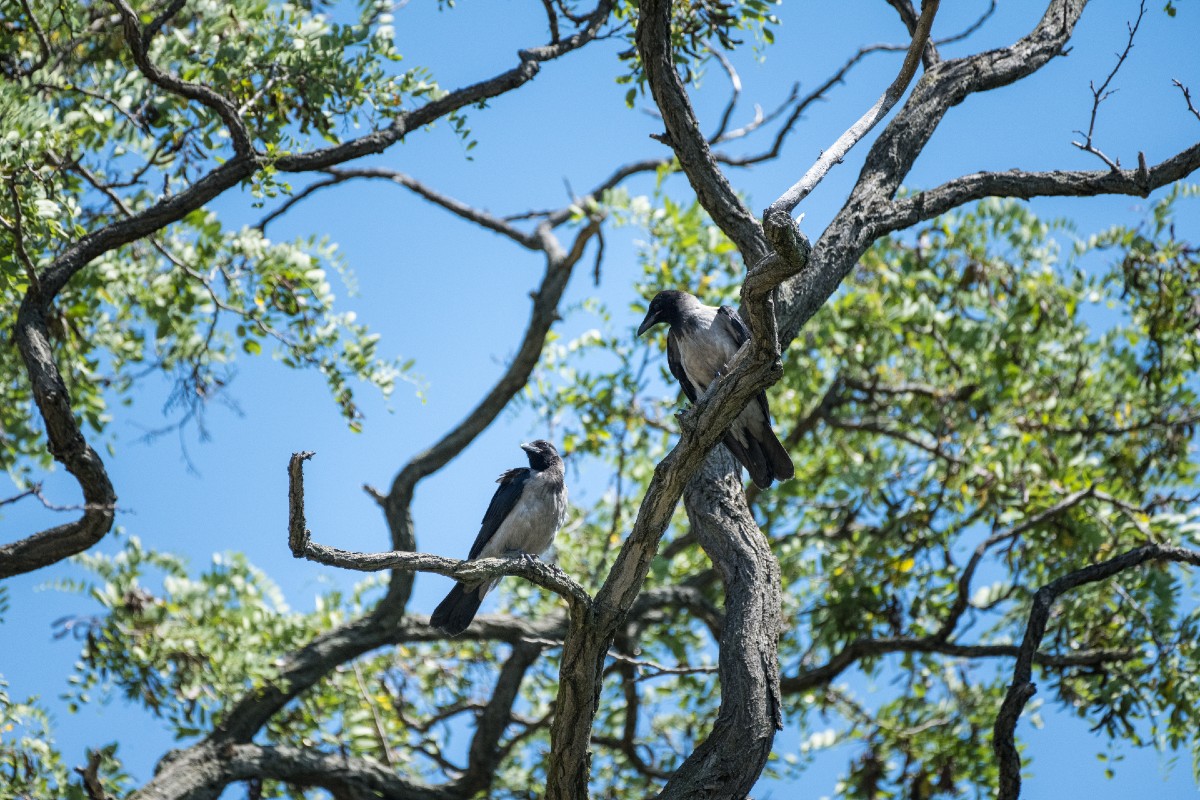 Many species of birds can be seen in the German capital. © Stefanie Loos / Reporter

To make its strategy better accepted, Berlin focuses on education: discovery days, workshops in schools, multiplication of billboards … In each district, two “ rangers » travel around the country to meet the inhabitants, to answer their questions, to appease the dissatisfied who consider the parks poorly maintained, do not appreciate the bird droppings or stumps of dead wood voluntarily left to the insects. “ They are mostly older people.explains Derk Ehlert. Berliners are above all proud of their biodiversity and their birds. » So much so that for some, the bear in the city’s coat of arms should be replaced by … the sparrow. 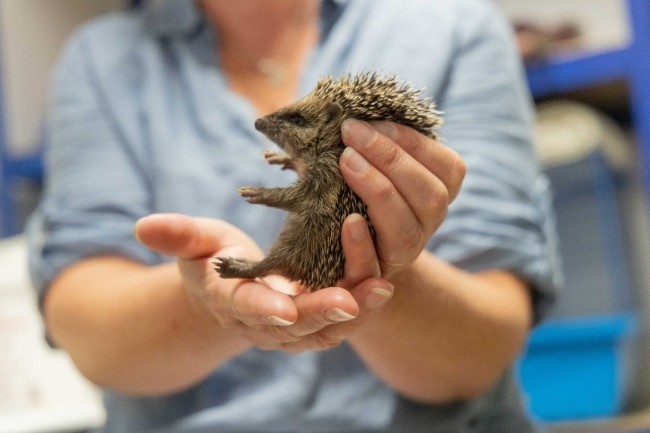 In her garden she looks after baby hedgehogs