The sovereign decision of the United States of America to recognize Morocco’s full and complete sovereignty over the Sahara is a matter of pride for the Kingdom.

Morocco is establishing a new order within the framework of its policy of economic and trade cooperation. The royal speech given on the occasion of the marking of the anniversary of the Green March laid the foundation for a new approach, which at the same time opened a new stage. Thus, Morocco will not undertake any economic or commercial approach that would exclude the Moroccan Sahara, declared HM King Mohammed VI to the address of those who display vague or ambivalent attitudes on the subject of the territorial integrity of the Moroccan Sahara. “To those who display vague or ambivalent positions, we declare that Morocco will not engage with them in any economic or commercial approach that would exclude the Moroccan Sahara”, said the Sovereign in a speech marking the 46th anniversary of the glorious Green March.
HM The King also expressed his consideration for the countries and groups linked to Morocco through conventions and partnerships, and for whom the southern provinces form an integral part of the national territory. “(…) we have in the region international partners in good faith who, with complete clarity and transparency, invest together with the national private sector and thus contribute to the welfare of the population”, hinted the sovereign. HM The King also noted that the positive development in the Sahara affair reinforces the ongoing development dynamics in the southern provinces. In fact, said HM the King, these are experiencing a general boom, illustrated by the development of infrastructure and the realization of economic and social projects.

The cornerstone of the Kingdom’s national unity, the Sahara issue is the cause that unites all Moroccans, HM the King continued, adding that it is therefore up to everyone, according to their position and status, to remain mobilized and vigilant to defend national unity and territorial integrity of the country to consolidate the achievements made in our southern provinces in political affairs and in terms of development. For the sovereign, it is the best “pledge of allegiance to the eternal oath of the Green March, to the immaculate memory of its craftsman, our venerable father our venerable father, his late majesty King Hassan II, may God rest his soul, as well as the brave martyrs of the fatherland”. HM the King took the opportunity of this speech to address to the five peoples of the Maghreb his most sincere wishes for unity and stability, progress and prosperity. Finally, the Sovereign paid a vivid tribute and expressed his consideration for the Royal Armed Forces, the Royal Gendarmerie, the National Security, the Auxiliary Forces, the Territorial Administration and the Civil Protection, all components combined for “their constant mobilization, under our command, to defend national unity and preserve security and stability of the country”. 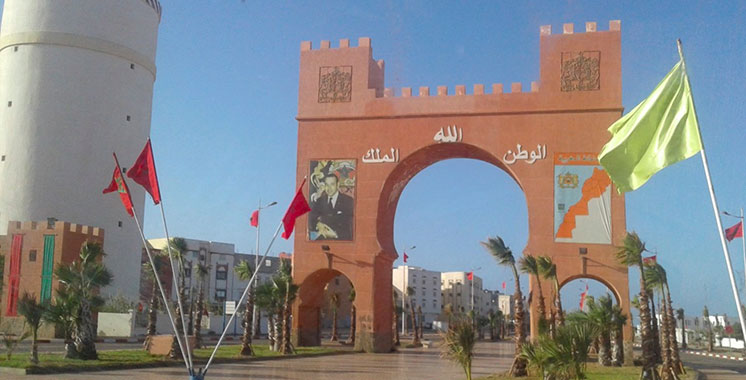 His Majesty King Mohammed VI reaffirmed Morocco’s attachment to the political process led by the United Nations on the artificial regional dispute over the Moroccan Sahara, whose Moroccanness today as in the past “will never be the agenda of any negotiation”. The Sovereign also reiterated the Kingdom’s commitment to seek a peaceful solution, for the maintenance of the ceasefire and the pursuit of coordination and cooperation with Minurso, within the strict limits of the powers granted to him. His Majesty the King took the opportunity to renew to United Nations Secretary-General Antonio Guterres and his personal envoy Morocco’s full support for the efforts he is making to restart the political process as soon as possible. In this context, the sovereign insisted on “the need to comply with the parameters defined in the successive resolutions of the Security Council since 2007 and which have been anchored in the meetings in Geneva under the auspices of the United Nations”. HM The King specified that if Morocco engages in negotiations, it is essentially to reach a peaceful solution to this artificial regional conflict, confirming that for Morocco, its Sahara is not to be negotiated.

The Sovereign emphasized that Morocco has progressed in recent months, with calm and serenity, in the action launched to defend its Sahara, and in this regard welcomes the Royal Armed Forces, which on November 13, 2020 restored the free movement of people. and goods at the El Guerguerat crossing point that connects the two sister countries, Morocco and Mauritania. “This firm peaceful action put an end to the provocations and aggressions that Morocco had already signaled to the international community how serious it is for the security and stability of the region”, said the sovereign. Pleased with the concrete support enjoyed by the national cause, HM the King affirmed that the sovereign decision of the United States to recognize Morocco’s full and complete sovereignty over its Sahara is a matter of pride for the Kingdom. This recognition is the natural consequence of the constant support of previous US administrations and the illustration of their constructive contribution to the process of solving the Sahara issue, the sovereign emphasized. “This briefing confirms the irreversible nature of the ongoing political process: it is dedicated to introducing a final solution based on the Autonomy Initiative under Moroccan sovereignty,” HM the King continued.