Do we like his cuteness ? Sure, we think, looking into the big black eyes of the little spotted seals (Phoca vitulina). Here they lie on the faded tiles of the Chene care center in Allouville-Bellefosse (Seine-Maritime). Wet coats, fine muzzles and long moustaches, Maloya, Pogo and Calypso jump awkwardly as they wait for their meal.

Their cries escalate when their caretaker, Julia, arrives, arms laden with pink fish soup. Dressed in a medical suit, the young woman carefully wedges the small seals between her thighs before intubating them to get them to swallow the mixture. “ If we want to make them regain their strength, we have no choiceshe explains. They are not dogs, they do not eat from a bowl. That would be too good ! »

A total of eight seal pups have been collected from the center since the beginning of the summer. All were abandoned by their still nursing mothers, probably after being disturbed by tourists. “ Out of curiosity, people come to see the seals up close as they rest on the sand. Mothers are scared and flee into the water, while babies stay put », says Julia. When they arrived at the care center, most were barely bigger than cats. Some still had their umbilical cord.

“ It is catastrophicsighs a nurse, Louise. Some tourists even go so far as to hug them. Orphans do. » Not all babies survive this forced separation. Two young people taken in by the center after being handled by humans have already died this year. “ There is one who walked into my arms », breathes Julia. She spits: “ They should look tougher. Maybe we would get closer. » 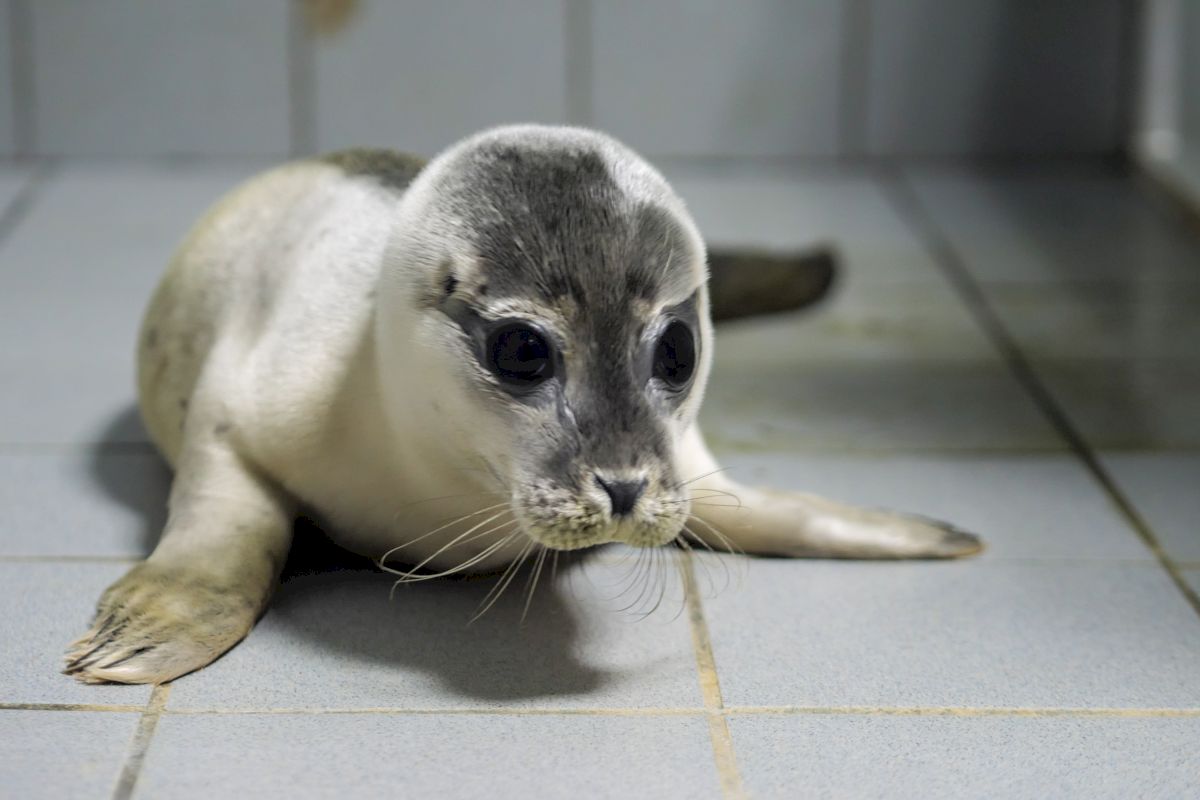 “ They should look tougher. Maybe we would get closer. » © Tiphaine Blot / Reporters

The inhabitants of Le Chene were born 130 kilometers away, on the coast of Picardy on the Bay of Somme (Hauts-de-France): vast expanses of sand surrounded by glasswort, constantly naked and clothed by the sea. Tourism began to develop in the region in the 1980s.

Today it represents a true gift: more than 2 million visitors visit its beaches and salt marshes every year, generating more than 2,000 jobs and 160 million euros in revenue, according to figures from Somme Tourisme. The agency boasts a natural heritage “ unique »which can be consumed “ at any time of the year »as its director François Bergez explained to echoesin 2020.

The local seal colony, home to around 400 seals (Phoca vitulina) and 100 gray seals (Halichoerus grypus), has greatly contributed to the development of this industry. In Saint-Valery-sur-Somme, where most expeditions depart “ nature », phocids are everywhere. Available in snow globes, stuffed animals or key rings, baby seals with mischievous smiles and mischievous eyes flood the windows of tobacconists and souvenir shops.

Even in restaurant toilets, posters promise an experience “ unique » meet marine mammals. On the crowded docks, everyone looks for the animal, camera slung over their shoulders. At sea, the driver of tourist boats crowds in front of the sandbars where the Phocids rest to explain to their customers, microphone in hand, how they live. 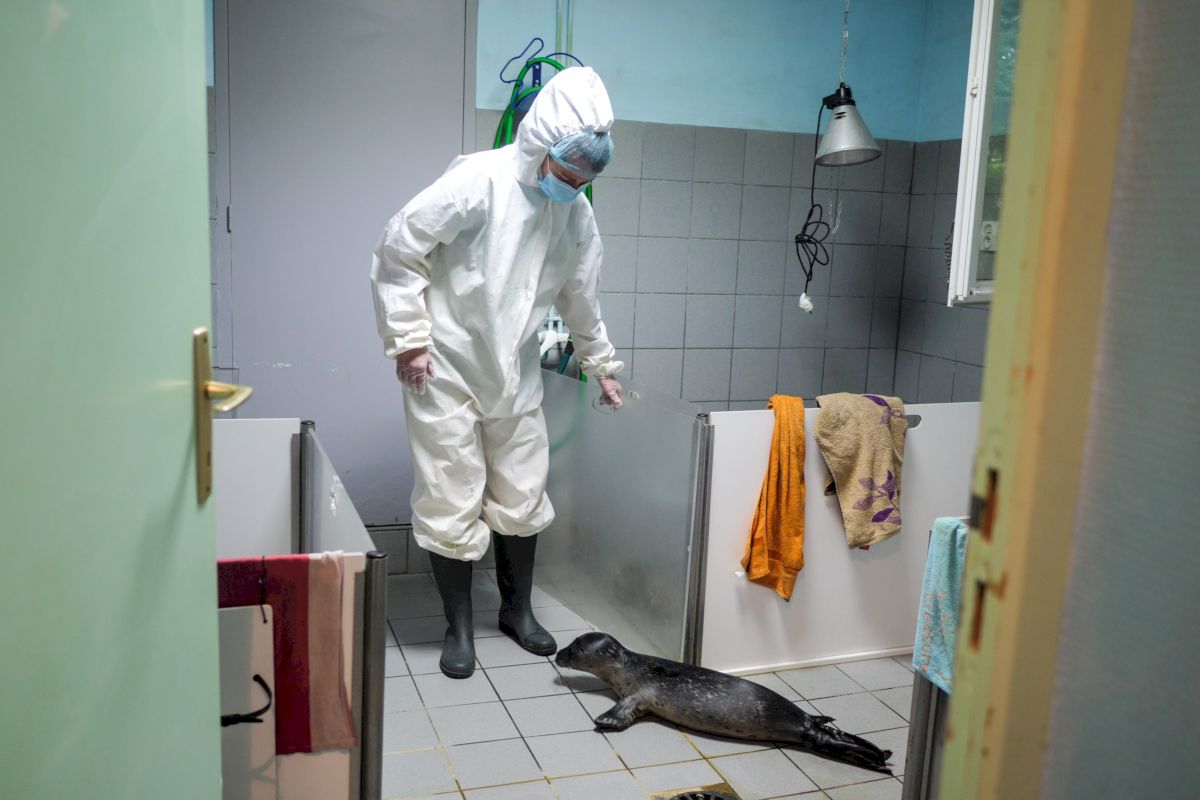 Around fifteen young seals in distress are collected each year by the associations. © Tiphaine Blot / Reporters

The situation annoys as much as it worries Patrick Thiery, chairman of the environmental protection association Picardie Nature. “ Baie de Somme is almost presented as a free animal park », he regrets. Since the place was marked “ France’s great place »in 2011 nature-related commercial activities exploded in areas where birds and seals live. “ There are hiking guides, electric scooters, cool bikes, horses, canoes, motorboats… When you put it all together, you get an accumulation of activity, at low tide and at high tide, just when they are breeding. There is no respite. »

No impact study has been carried out to assess the cumulative effects of these activities on the ecosystem, regrets Patrick Thiery. However, according to him, the incessant ballet of people around the sandbanks is likely to stress the wildlife. Although it is forbidden to approach the seals within 300 meters, the volunteers of Picardie Nature often observe hikers stopping to pet them or take selfies with them.

“ Seals are able to learn what may or may not be a source of disturbance », points out Cécile Vincent, teacher-researcher at the Center for Biological Studies in Chizé and specialist in seals. She evokes the example of an English breeding ground located right next to a runway for Royal Air Force aircraft. “ There is enormous noise pollution, but the seals have got used to it, because they know that no one is coming to touch them. » In the Baie de Somme, where people move freely, seals cannot be safe. Out of fear, they sometimes jump into the water when approached.

“ It is not good for them for thermoregulation problemscontinues Cécile Vincent. If they do it once, it’s not dramatic. The problem is repetition. Seals are warm-blooded animals. They live in an environment colder than their bodies, which must remain at around 37°C. Underwater, the environment is much colder and the heat loss is much greater than in the air. If they often go into the water to escape from disturbances, they lose energy. » Mothers also run the risk of not being reunited with their young when they return to earth. It may “ clear » reduce the number of employees, according to the researcher. 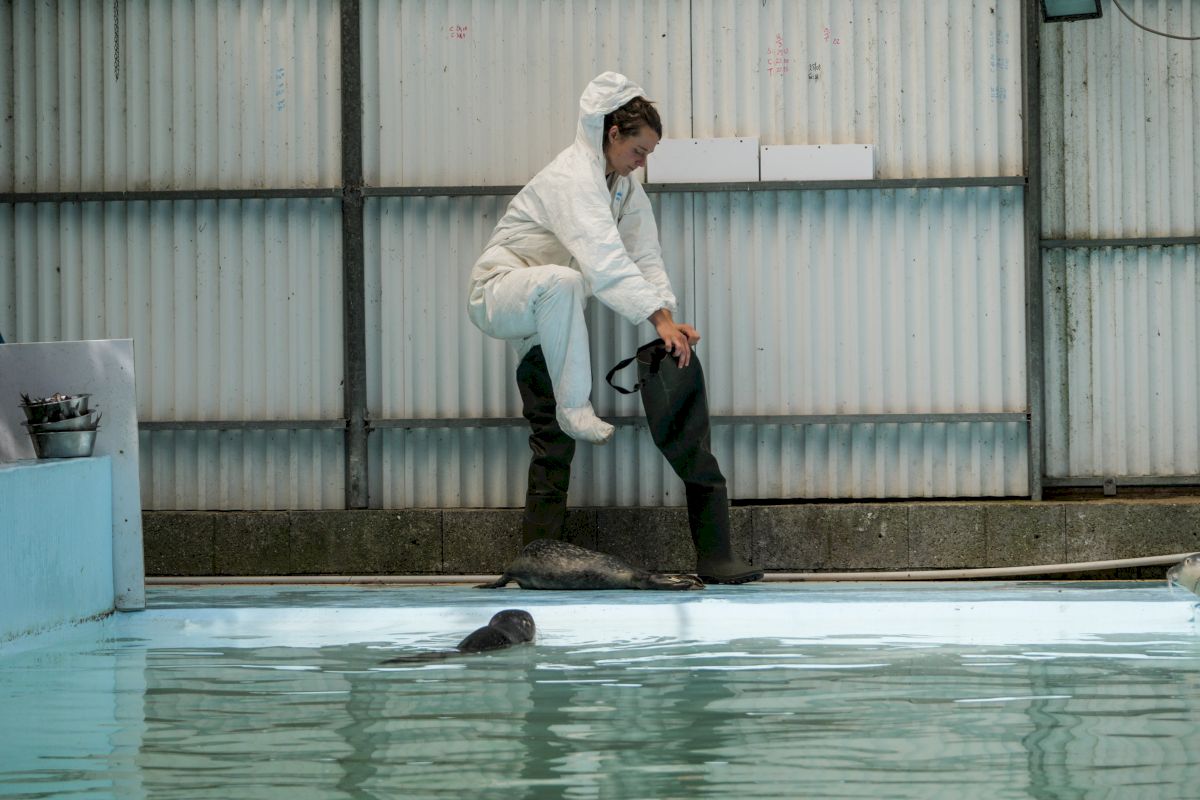 The most self-sufficient seals are fed in this pool. © Tiphaine Blot / Reporters

At the moment, she says, the colony is doing well. But tourism is added to other threats related to human activities, such as climate change, the reduction of fish stocks or the accidental capture of seals by fishermen. “ We do not necessarily know the effects of these cumulative impactsemphasizes Cécile Vincent. You have to take a cautious approach without necessarily blocking everything. »

Each year, around 15 seals are in distress – or 10 % of newborns – are picked up by Picardie Nature volunteers, then placed in the Chene care center or the Animal Protection League (LPA) from Calais. “ But if we weren’t there to patrol and prevent disturbances, there would be 30 or 40 »says Patrick Thiery. 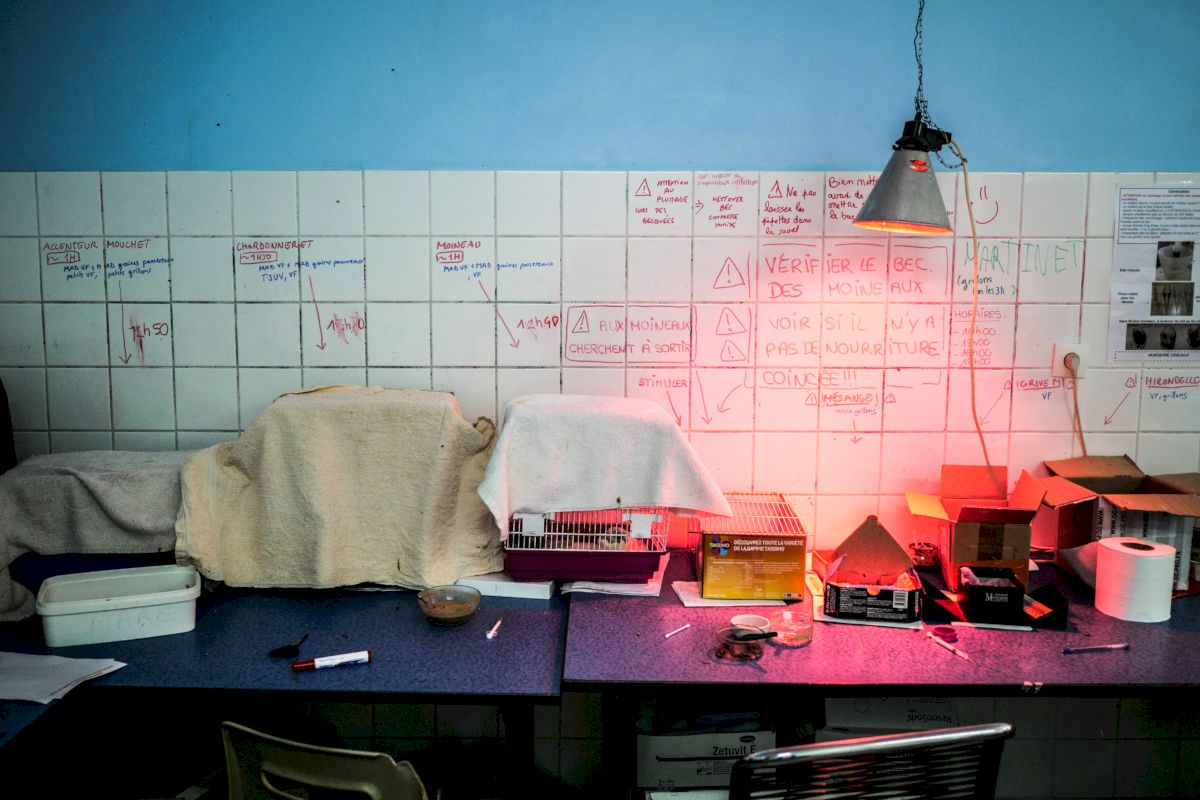 In addition to seals, birds are also collected by Chene. © Tiphaine Blot / Reporters

Seals aren’t the only ones suffering from the influx of visitors. Trampling by passers-by can damage plants. Birds, some of which nest on beaches, can also be disturbed by tourist activities. “ When there are low-altitude balloon flights, the burners make a devilish racket and the birds fly »says Patrick Thiery.

The president of Picardie Nature condemns one “ obvious imbalance » between the income from the tourist exploitation of the ecosystem and the funds allocated to its protection. “ All these activities generate hundreds of thousands of euros in revenue as we scramble to organize summer monitoring and find accommodation to house our volunteers. »

Every summer, the association struggles with a dozen volunteers to educate hundreds of thousands of tourists. “ It’s not ideal. » Backup center Chene is also struggling to make ends meet. The care of a young seal costs more than 2,000 euros. “ We are supported by the communities, but not as much as we should be »believes Alain Beaufils, its manager.

“ We suffer at the benevolence of politicians and financiers »

The joint association Baie de Somme-Grand Littoral Picard, which manages the reserve, also cites a lack of financial and human resources. He currently only has two sworn guards to keep an eye on over several thousand hectares. “ We suffer at the benevolence of politicians and financiersconfides Alexandre Quénu, curator of the nature reserve. Maintaining and justifying everyone’s views is a constant struggle. We would be more comfortable with one or two extra people. »

Patrick Thiery, from Picardie Nature, has for several years defended the principle of an eco-tax, which would be imposed on tourist businesses and then transferred to those who protect the reserve. Discussions with the reserve’s managers have so far been unsuccessful. Little progress has been made in the area of ​​communication. Somme Tourisme has committed to no longer using close-ups of seals in its media, so as not to give visitors the impression that it is possible to get close to them.

The board is also trying to develop the tourist offer inland to reduce the pressure on the coast. “ But we cannot force our institutional partners and private service providers not to communicate on the sealsays Dorothée Maréchal, head of the performance development department. It sells better than a plant, they necessarily try to use that image. »

The seals are released if they survive to reach 35 kilos. © Tiphaine Blot / Reporters

Other ways of living with seals have yet to be invented. Every year, Picardie Nature organizes observation points with telescopes, thanks to which the phocids can be observed without being disturbed. Julia, from Chene, suggests closing certain beaches to the public during the seal breeding season. Such a measure still seems a long way off. Meanwhile, the trainers repair the broken pots.

On the edge of the Chene swimming pool, Julia teaches her protégés to eat whole fish. Salsa, Boogie and Hip seem to be on the way. The small seals squirm in the water up to the healer’s legs, then leap to catch the herring she hands them. If they survive, they will be released in the autumn when they have reached 35 kilos. By then the parking lots will be empty. The bay will echo with sounds other than tourists.

Our report in pictures: 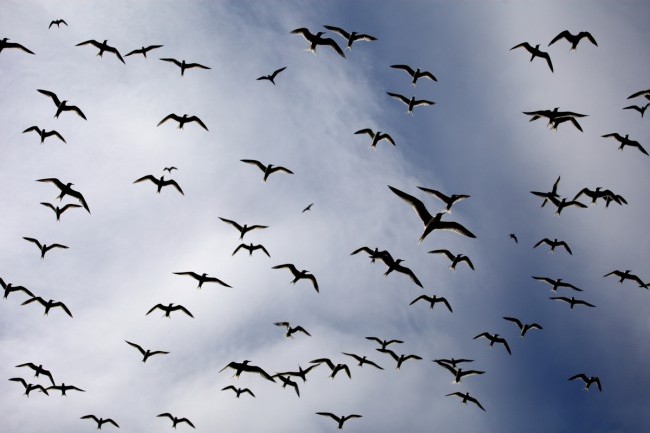