Plesiosaurs were marine reptiles that lived in the seas and oceans of the Upper Triassic, Jurassic and Cretaceous. Characterized by a small head that sat on the end of a very long neck and had four fins, a broad and flat body and a short tail, they were a group of highly effective predators.

They lived at the same time as the dinosaurs, which occupied most of the ecological niches on dry land. Both groups became extinct at the same time, about 65 million years ago. Since then, no plesiosaur-like creature has adopted the same body pattern or the same way of swimming, although some see Nessie, the famous “monster” of Loch Ness, as a descendant of this group.

If there is no question here of debating the existence of said monster, however, a new study confirms that certain plesiosaurs could undoubtedly frequent the fresh water of rivers.

Bones on the river bed

Researchers from the University of Bath and University of Portsmouth in the UK and Hassan II University in Morocco have reported the discovery of several bones in freshwater deposits of the Cretaceous Kem Kem Plateau (about 100 million years ago), Western Sahara.

The fossils include vertebrae and teeth from adult plesiosaurs up to three meters long and a humerus belonging to a 1.5m juvenile. The bones and teeth were found scattered and in different localities: they therefore each represent a different animal, viz. 12 different copies. This diversity of fossils suggests that these creatures regularly lived and fed in fresh water, along with frogs, crocodiles and the huge Spinosaurus, a dinosaur that was probably able to swim.

One of the plesiosaur teeth found in Kem Kem. Credit: Dr. Nick Longrich/University of Bath.

While bones provide information about where animals died, teeth are interesting because they were lost while the animal was alive. They therefore make it possible to understand some of the behavior of these Saharan plesiosaurs. Their analysis, which accompanies the study published in the journal Cretaceous research, reveals that they bear wear marks similar to the teeth of spinosaurs accustomed to crunching armored fish in the Kem Kem rivers for their meals. This means that these plesiosaurs must also have persistently visited the same areas. According to the authors, they were able to tolerate both fresh and salt water.

It is even possible that plesiosaurs were permanent residents of the river, like modern river dolphins. Their small size would have allowed them to hunt in shallow rivers, and the fossils demonstrate an incredibly rich fauna.

Freshwater dolphins have appeared at least four times during evolution, in the Ganges, the Yangtze River, and twice in the Amazon. And a species of freshwater seal lives in Lake Baikal in Siberia. It is therefore possible that plesiosaurs also adapted to freshwater. Those of Kem Kem may belong to the family Leptocleididae, small animals whose fossils are also found in the brackish waters of North America and China. However, this second hypothesis will require many additional studies before it can be validated.

The most dangerous place in the world

The “Kem Kem Beds” is a geological formation located next to a small village called Beggaa, which contains a layer of sand very rich in fossils of all kinds. The inhabitants of Beggaa go up there daily to dig there, and they regularly dig up many petrified bones.

All these fossils are offered for sale through several networks, as well as in the village market, where they are bought by tourists. Knowing this trade, paleontologists also participate in it by ensuring that the villagers are properly paid for their work. They can thus recover valuable pieces that would otherwise be scattered around the world, among private collectors.

100 million years ago, this part of what is now the Sahara desert was home to a river ecosystem populated by many animals: hundreds of species of fish, turtles, crocodiles and dozens of dinosaurs. The vast majority of these animals were predators that chewed on each other and also fed on the abundant fish stocks.

With an international team, Nizar Ibrahim publishes another study in the journal ZooKeys who prepares a review of the whole of this fauna, based on discoveries made over nearly a century at Kem Kem. 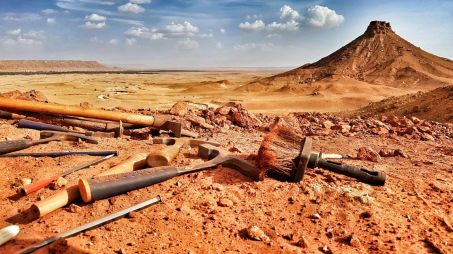 The bestiary is terrifying, so much so that the paleontologist qualifies the site as being “the most dangerous in the history of the earth“. Among the dinosaurs identified, three of the largest known predators were actually present: spinosaurs therefore, but also abelisaurids and Carcharodontosaurs.

In the air ruled huge pterosaurs, these flying reptiles, of which at least three species have recently been brought to light. And even the fish – the primary prey – were not left out. They also grew to gigantic proportions represented by giant coelacanths or freshwater sawfish called Onchopristis, which had an enormous blade-sharpened snout. To this list are now added the plesiosaurs, which had an equally terrifying appearance.